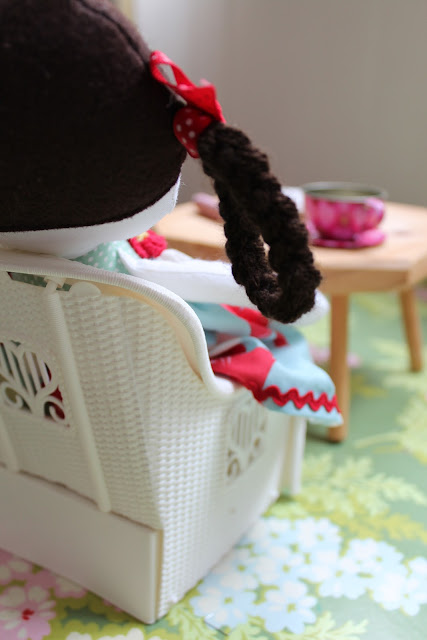 Look at this dolly kicking back in her faux wicker chair, quietly pausing and reflecting over a cup of tea. She is in no way reminiscent of what is actually going on at my place, which is crazy non stop festive and end of school year hoo-ha. . This has of course left me no time to blog for nearly two weeks and has rendered me crazy enough to be playing with dollies. 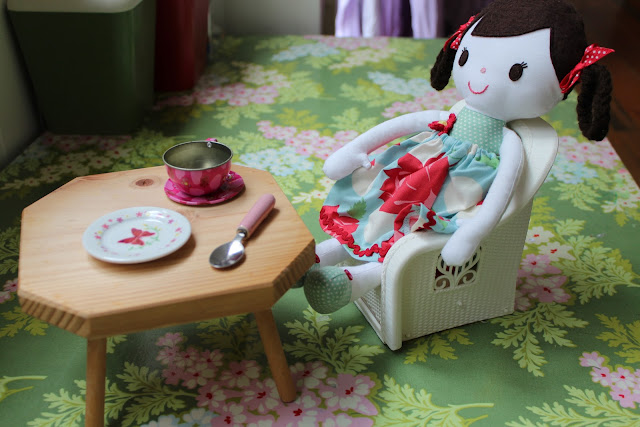 This dolly has been hiding in my cupboard for nearly 2 years waiting for miss Liongirl to turn 3 which is happening soon but we pretended it  happened last week as that was  a whole lot more convenient! Would you believe I just found the little table and perfectly sized chair at two different op shops in the last week, 50 cents each. As staging a tea party is Liongirl's favourite way to while away the hours, these were all a big hit. 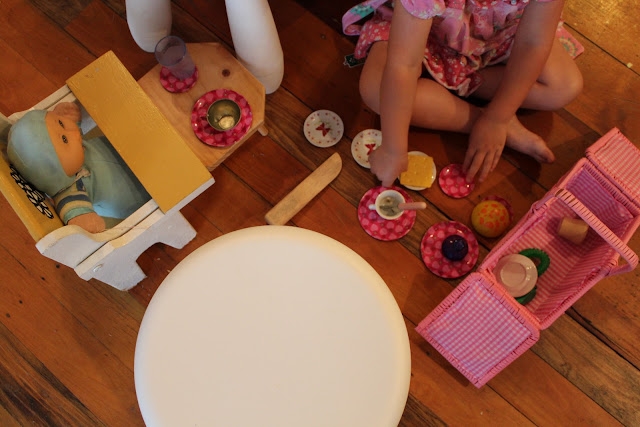 Last week was one of THOSE weeks. You know the ones where it is 30 degrees and you have just discovered your  air conditioner has died. The timing is exceptionally poor as you are required to make 40 dairy free cupcakes for the end of year Christmas parties for both school and childcare. Of course your husband would be away interstate for a few nights. While carefully placing the first tray of cupcakes in the oven you are clumsy and manage to tip the entire batch out into the oven and watch in horror as vast quantities of mixture spreads  into every crevice and starts baking itself onto racks and trays.

You rapidly come to the realization that with the time it takes for your oven to cool down then warm up again, you have no choice but to clear the thickest of it up and then just BAKE through it. You are so addled whilst making the next batch  you manage to omit the sugar. During the third and fourth batches the stench of burnt cupcake permeates every nook of your 30 degree house. In the midst of this baking debacle it starts to  storm and the three loads of  dry washing on the line get completely drenched before you remember that they are even out there. Don't even get me started on the merits of icing 40 cupcakes with two small children in the morning before you have to go to work, or the resultant state of your house/kitchen and the fact that you also have a birthday party to pull off less than 48 hours later. Now you can see why I have resorted to playing with dolls whilst quietly rocking myself back and forth on the lounge room floor.

We also had to squeeze in our first school swim carnival. 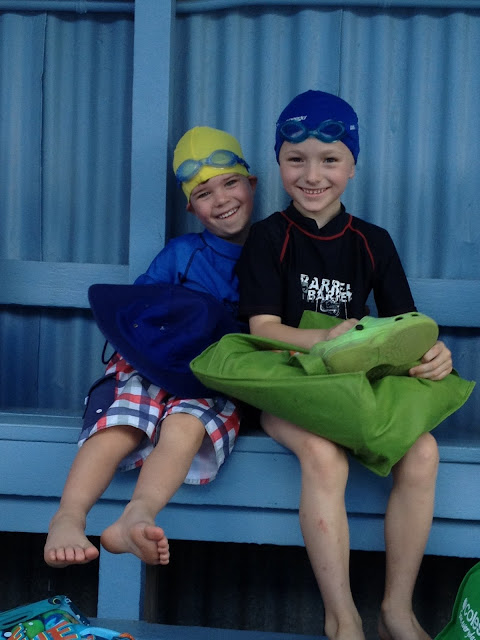 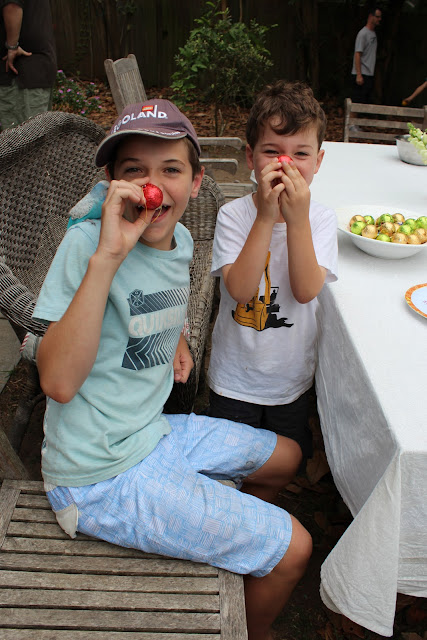 My work Christmas party which of course required a new frock. The cardi did  not actually come with it, instead there are glorious green straps like the belt. It is from this lovely shop. Luckily I missed the spring collection or I would have been coveting the entire store. 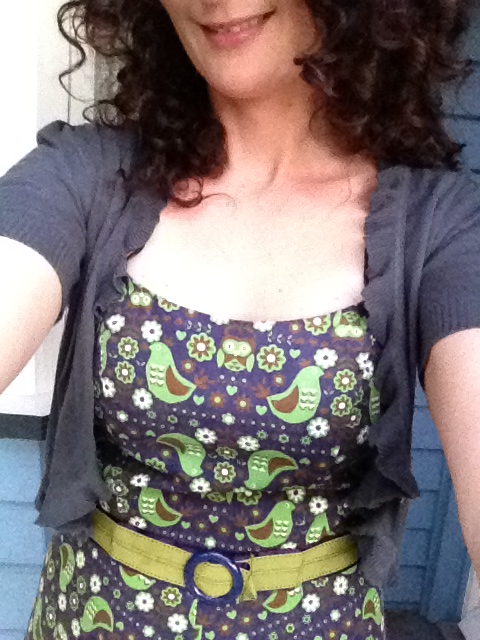 Somewhere in there I had to squeeze in my turn presenting to the prep class about my job, parent teacher interviews and producing an installation for the prep class village hospital. After producing this creation mid year, I knew we could do something that the kids could find really interactive. Meet Sam, a very sick patient. 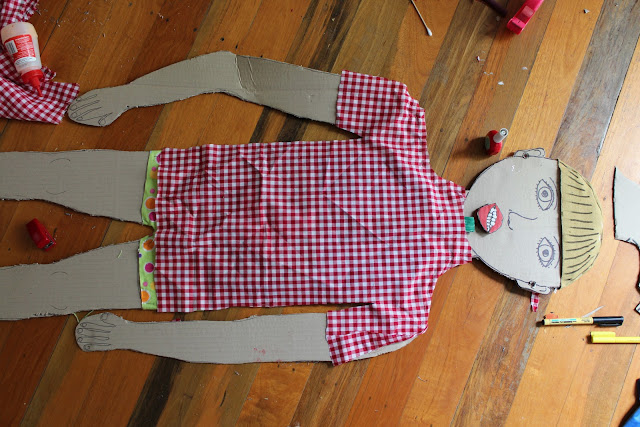 Poor Sam really needs to keep track of all his internal organs. 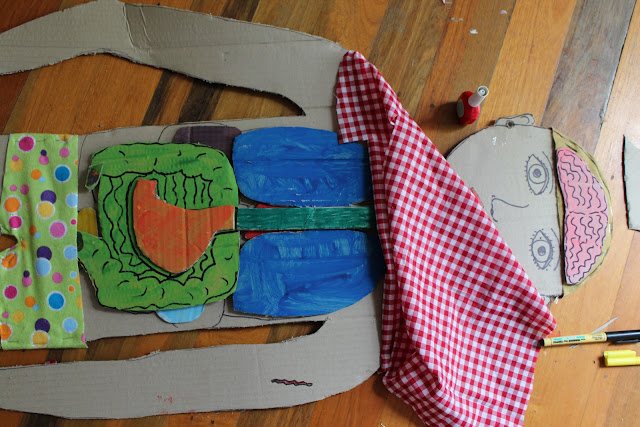 And he should know better than to insert tiny objects into his ears. Now that 20 little preppies have had a good look I'm sure he's feeling really regretful. 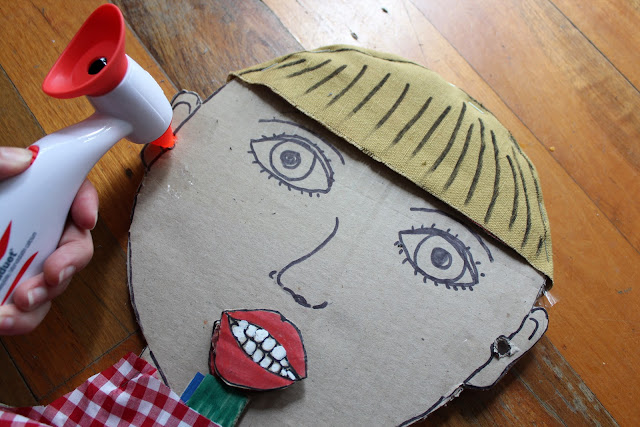 And I bet he wished he hadn't complained about a sore throat. Those tonsils were whipped out faster than you could blink. 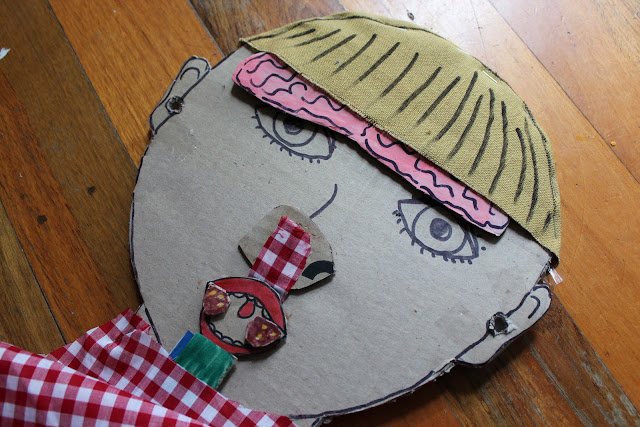 Frankly I think he was a whisker away from a lobotomy as well.

Preppies are probably best described as being very enthusiastic, and very random. One little boy stood up in front of the whole class and proudly shared that his dad was  a garbage collector. Not sure what his investment banker father would make of that one. They do philosophy now in prep.  And boy, they sure don't shy away from the weighty topics. I personally witnessed both "Should animals be kept in zoos" and "Is Santa Claus Real" being debated by the entire class.

And at parent teacher interviews, I discovered that while understanding diversity is not one of Roboboy's strengths (he is of the absolute belief that boys cannot wear pink) , he was the driving force behind a protest rally to save the rainforest. Staged on the school oval, complete with posters and resulting in a $100 fundraise for the Wilderness Society. And that weird animal he had been talking about all term - the one with stripes like a zebra, head like a giraffe, velvet fur and a purple tongue- the one that had been baffling his teacher and I, yep it is real, it's an OKAPI. See what those Diego shows are doing to our children.

See you all soon with a great wall of pink. Yep Miss Liongirl rocks the big THREE, in a tutu of course.
Posted by Bungalowgirl at 2:24 PM