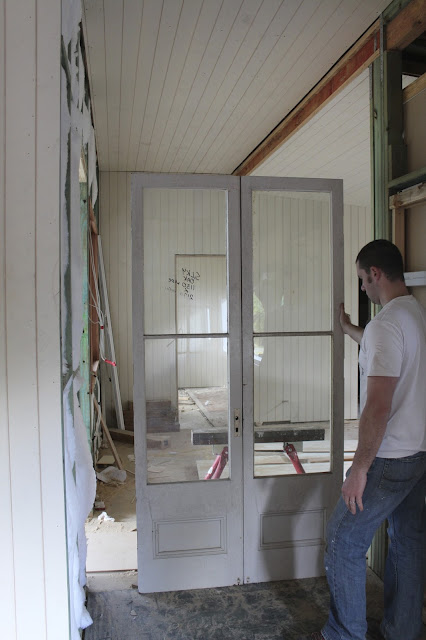 So, after a whirlwind weekend of colour and crochet, (which I will share as soon as I can sort through the mountain of images) I am back recharged, hopefully enough to get me through the remaining weeks of this reno. It seems that I hit my hump-slump quite late in the day as the builder tells me that the bulk of the "building" part will be finished this week! Goodness, that seems incredible.

It will still be a few weeks before the kitchen and laundry are installed and the electrician and plumber return, but it does seem that we are on the home stretch. More exciting (and equally frightening) was the dawning realization that our lease is up in about six weeks and we will be packing up again to move back home.

So, let me fill you in on the most recent debacles. Firstly, last week we realised  that the second hand french doors we had purchased a year ago were significantly too small for the space they were meant to go in.  This walkway (in the above pic) separates the kitchen from the tv/family room and was always intended to have a set of doors, partly to conceal the height discrepancy between the two rooms, but also as a noise barrier to separate the tv from our other living area.

When our builder suggested that he could keep part of this room at the full height of 3 m we jumped at the chance. This really opened up the space and we toyed with leaving it all open with no doors. If this was a purely aesthetic decision I must say I would not have put the doors back. However, as I am keen to create some noise barriers in the house we really felt they needed to go in. So, now we had to find wider doors and some sort of fanlight above them, within a week.

Luckily, my favourite displaced demolition yard ( Woolloongabba Demolitions at Rocklea) came through with a set of french doors the exact ( unusual) width I wanted. 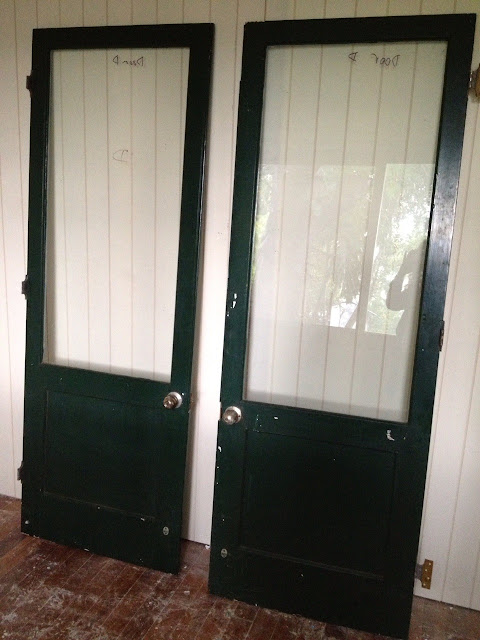 So then I had to try and find a fanlight 1450 wide to go above them. Unfortunately this is an extremely non standard window size and they had nothing close. So, I then trotted over to my other favourite demolition yard ( The Demolition Yard in Coorparoo ) and would you believe they had a casement window almost that exact size. In fact, once the bottom was trimmed up to make all the edges the same width, it was THE exact size. So that's $320 for the doors and $40 for the window, all sorted. (The same combination custom made for these unusual sizes would probably be around $1200) so I was a happy girl. 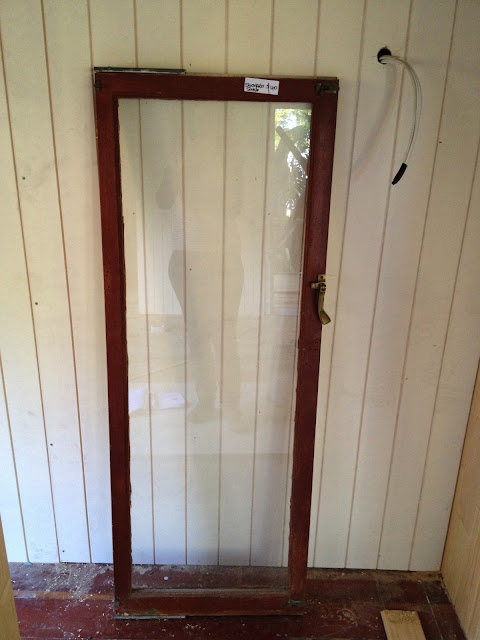 And, here they are installed beautifully. Yes, one side is blue. 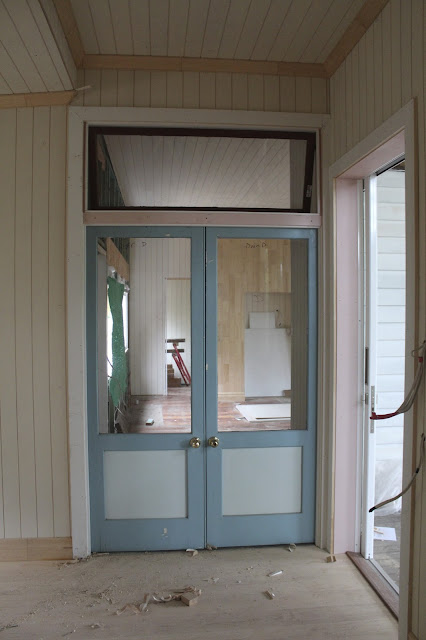 And the other is green. Lucky I like painting! The hideous gold handles will be going, not sure what to replace them with, knobs or handles? 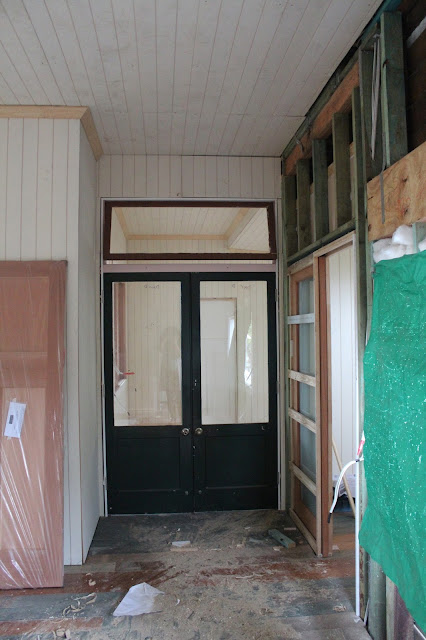 And because the fanlight was a casement window in it's previous life, it still had all the hardware to open like one. So my awesome builders (without even asking) installed it to open like a hopper to encourage airflow. I was impressed as I was just expecting a fixed panel.

Now back to the other debacle. Remember this pic? What is going on, you wanted to know? 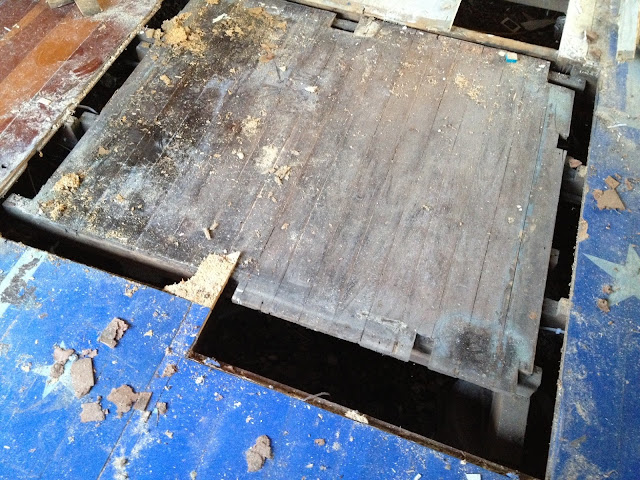 Well, the fantastic blue star floor from the back bedroom that was to become about half the kitchen floor turned out to not be level due to this old platform it had been built over. Quite a few of the boards were not in good shape and had to be removed. This meant that the pile of reclaimed pine flooring we had been amassing for the last year was going to fall significantly short. And reclaimed hoop pine flooring is almost impossible to obtain, especially at short notice.

I desperately rang around all the demolition yards in search and was told a houseful was expected that week and we could have the lot. I waited with bated breath, only to discover at the final hour that the floors were all  rotten and could not be used and no more was expected in the coming weeks. So, with some sadness we have had to go the way of new pine flooring for the family room. Our builder says it can be stained to match, and luckily we have been able to place to join in the natural junction of two rooms, but it is still disappointing. 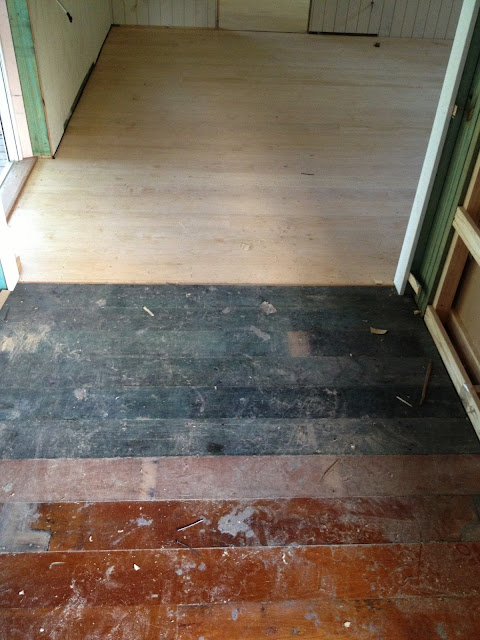 The cost difference between the two options is not huge but unfortunately, to find reclaimed timber you  need time on your side and at this point in the reno that was one thing we did not have. 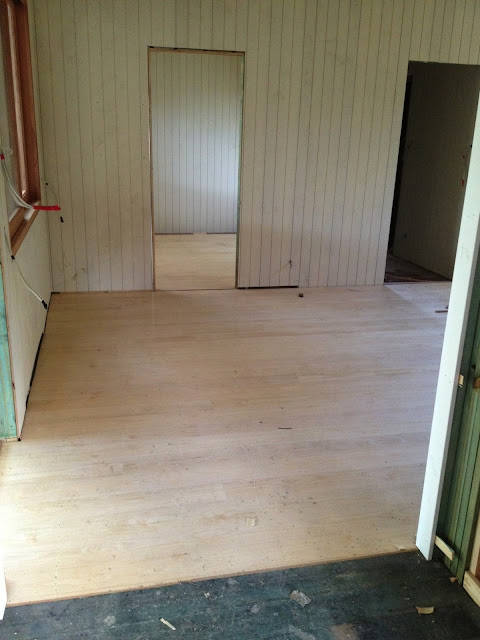 The one positive is that we were able to continue to pine into my sewing room which otherwise would have had this issue to deal with. 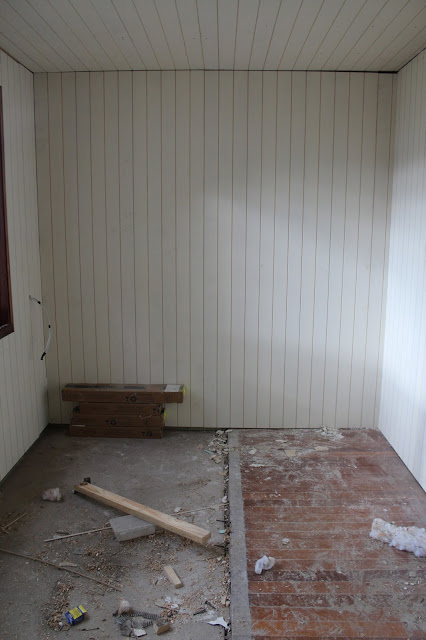 Yes, that's the original narrow hardwood floors on the right half of the doorway and the yellow tongue subfloor of the closed in verandah on the left. Not a great look in a doorway as even  if we added more hardwood there would still be a huge join down the middle. So much better to just continue the new pine straight in here from the family room. 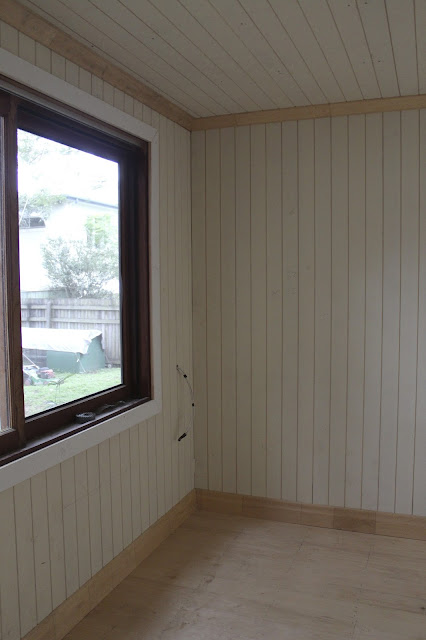 And look, there are are even cornices, architraves and skirting boards now too. And the sliding door is in for my little room. We ordered the same profile as the original part of the house. 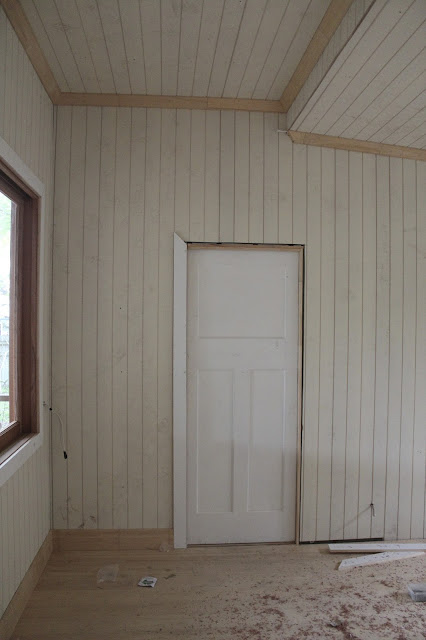 And in other progress, the back stairs were completed. 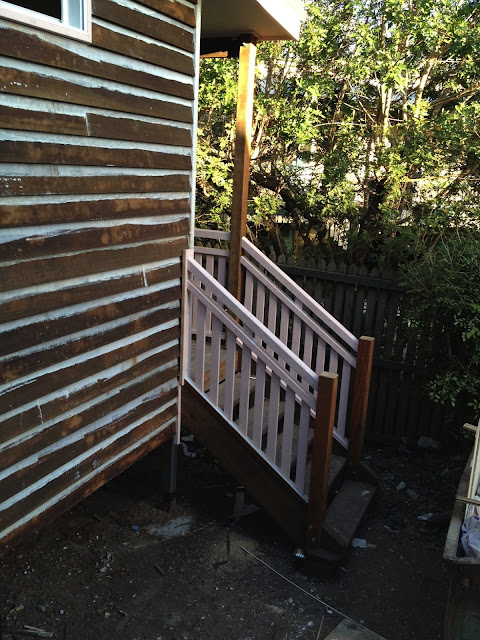 The wall was sealed up between our bedroom and the pantry. 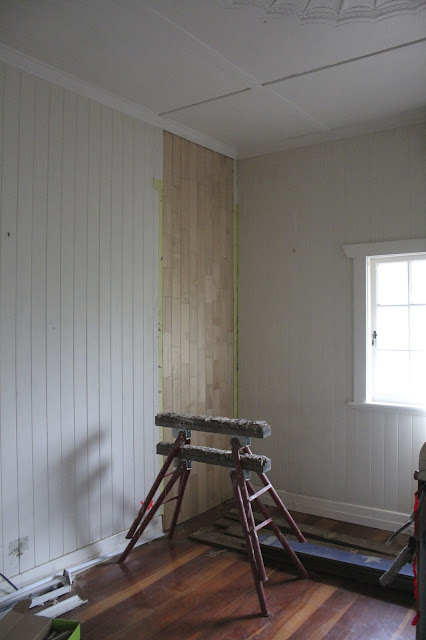 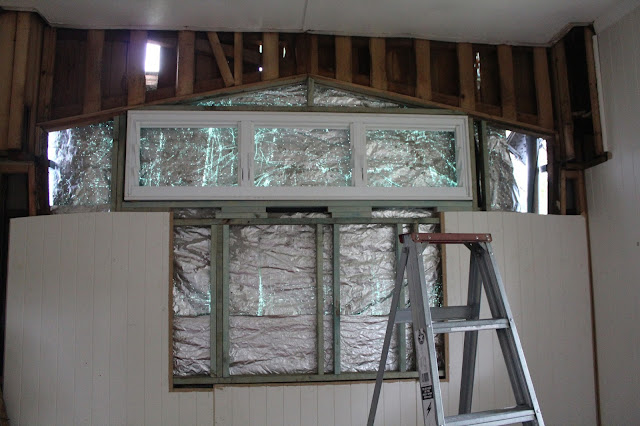 All in all, a bit of drama, but lots of progress. Back soon with LOTS to share from this week.
Posted by Bungalowgirl at 11:03 AM