An under the sea mermaid birthday party 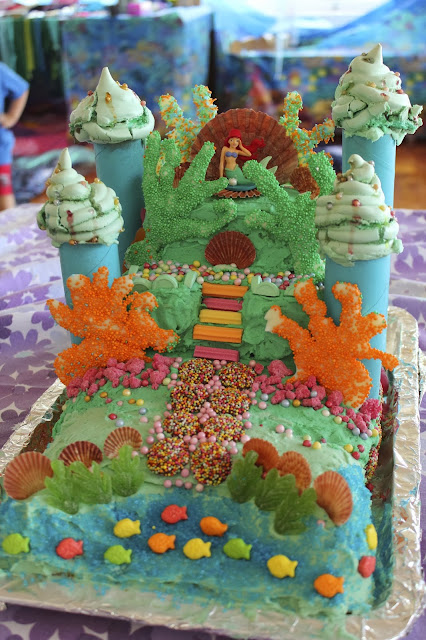 So as we recover from the Under the sea, mermaid birthday party extravaganza, it is time to share all the best bits. Let's start with the cake. This would be my absolutely most favourite cake that I have ever made for either of my children. Miss Liongirl and I had agreed on some kind of mermaid under the sea castle type cake. The details, like all my cakes, kind of came together as it was assembled and of course involved maximum colour and lolly coverage. My favourite part was the corals on either side which were made by Roboboy and I with drizzled white chocolate covered in sprinkles and set in the fridge. 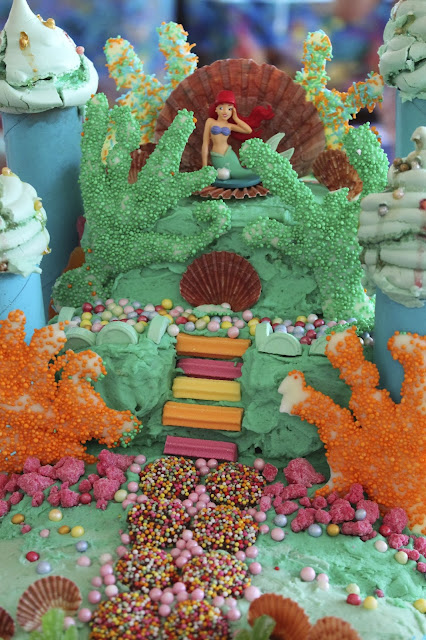 The pink gravel was a previous batch of chocolate that curdled when I added the pink food colouring. Luckily, it looked just like gravel. The turrets were made of cardboard rolls pinched from kindy with meringues on the top. I had a stash of these scallop shells collected from Currumbin beach many, many years ago and saved for a day just like this one. A lovely mum at school loaned me the Ariel figurine which was exactly the right size. 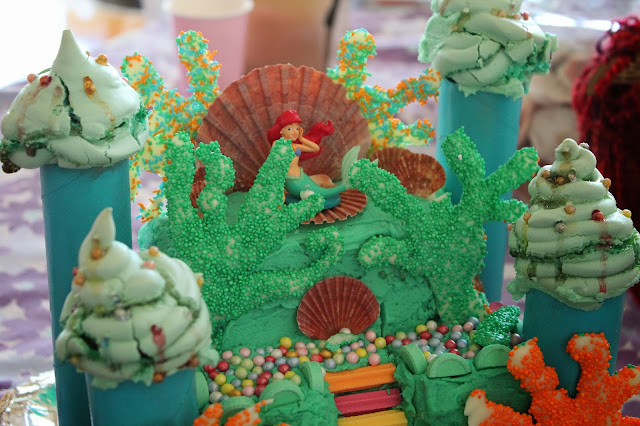 Legoman even had some great ideas for this cake and created some seaweed up the sides with lolly snakes and the spearmint leaves down the front trimmed to look a miniature kelp forest. He also helped decorate the mini cupcakes with tiny fish blowing bubbles. The fish came from Spotlight in the cake decorating section. 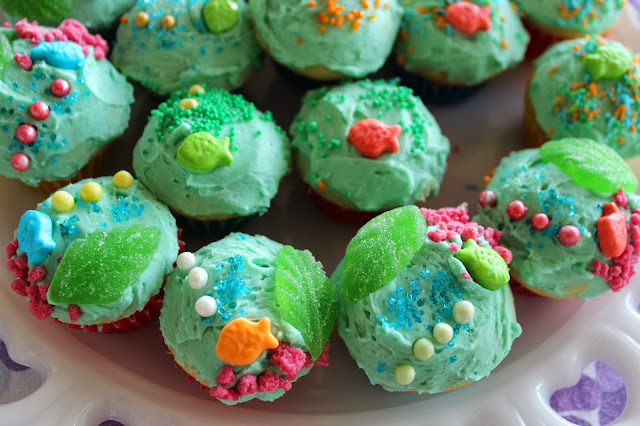 Best of all he was happy to step up and re create the one idea I pinched from Pinterest which was to carve this amazing watermelon shark that was a massive hit. You had to be brave to reach into his mouth to get some melon. 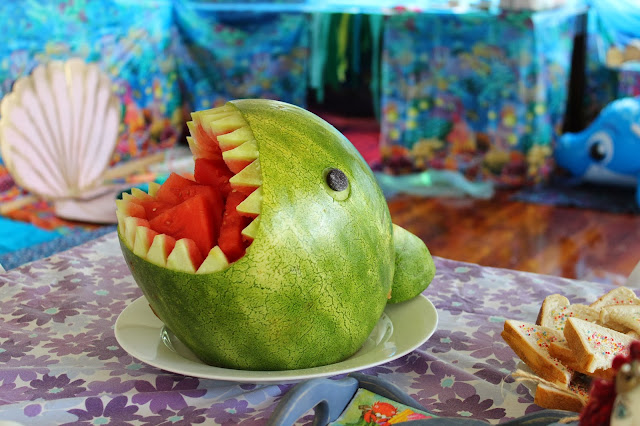 Like previous parties I pulled out the milk glass and an appropriate toned vintage sheet for the food table. Only this time I had a fan documenting my work. 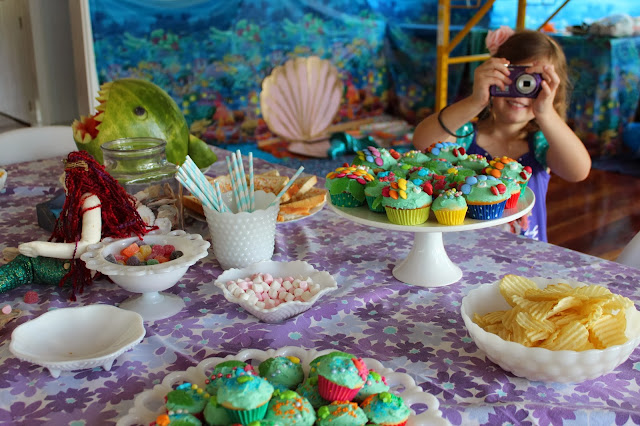 The girls each made a mermaid crown out of cardboard, gold doily and stick on jewels and the take home boxes were treasure chests that I had lots of fun spraying gold. ( unlike house painting, spray paint is super fast and incredibly satisfying) 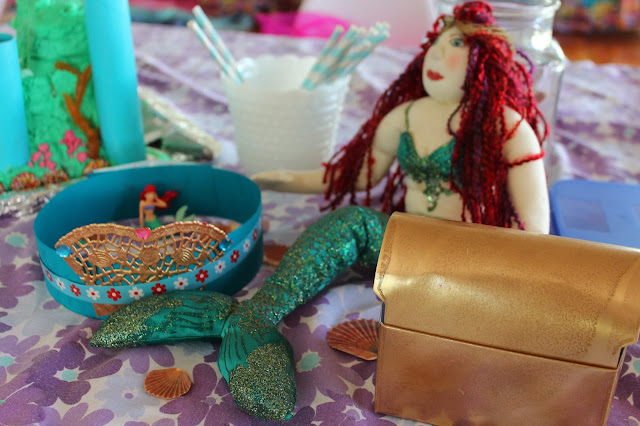 The cursed , never speak of it again, rainbow fish piñata ended up amazingly successful and survived two vigorous beatings from each child before he was done for. The kids had helped me glue all his crepe on the night before and aside from the glue all over the floor ( which I am still trying to remove) it was a child friendly project. 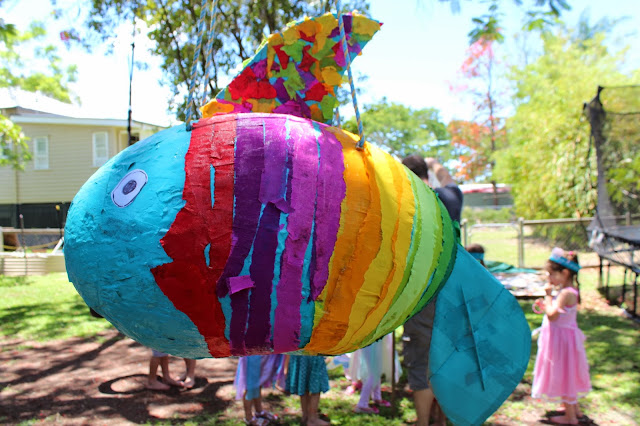 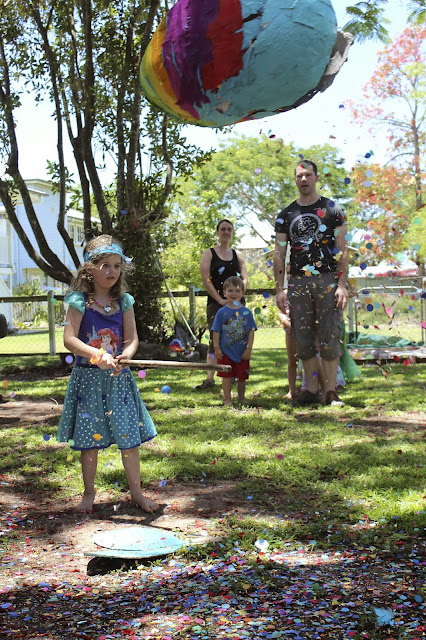 There was of course pass the parcel, musical chairs and a scavenger hunt before a good solid hosing on the trampoline of all those mermaids in their swimmers. 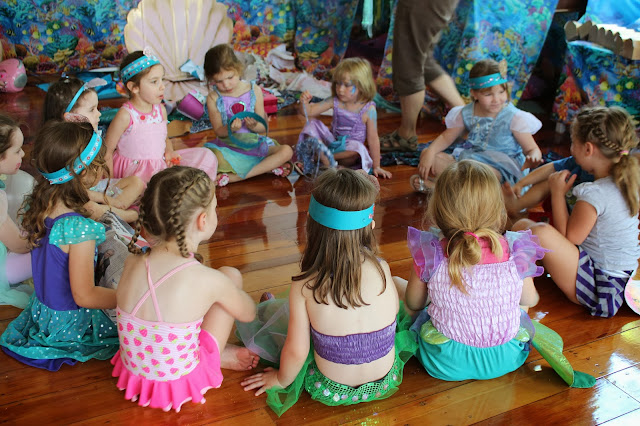 The rest of the magic was achieved with a large roll of plastic emblazoned with an underwater scene from the local party shop which was the only thing in the entire party that I didn't scratch up from around the house. We encircled our dining table and the kids helped me make a seaweed doorway from  crepe to turn it into a mermaid grotto. 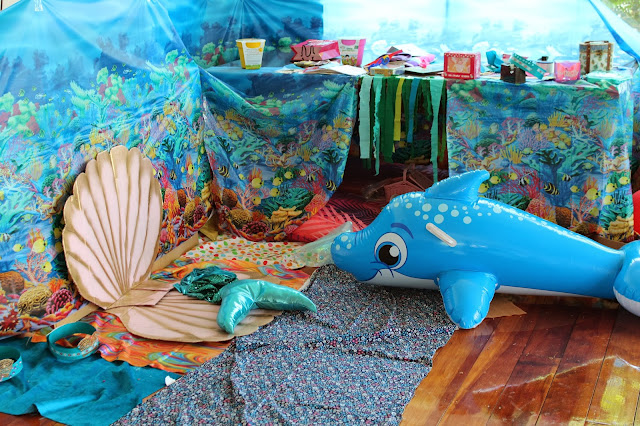 I had also made a giant clam shell for the girls to sit on wearing a mermaid tail that I had insanely decided to sew up the night before. The rest of it was just a whole pile of fabrics from my stash that looked either like coral or the ocean. 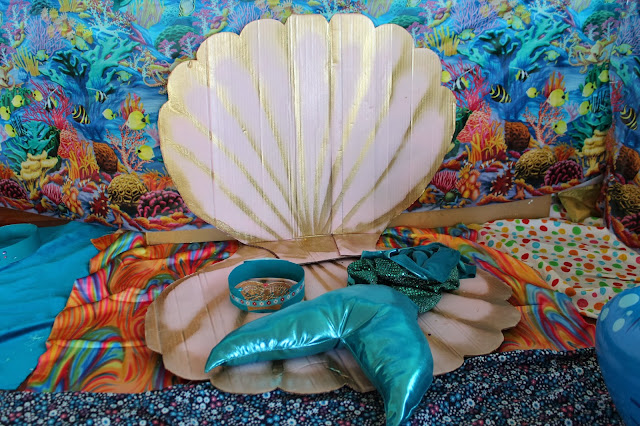 Most of the girls had their photo taken as a mermaid which I will be sending on to their mums. 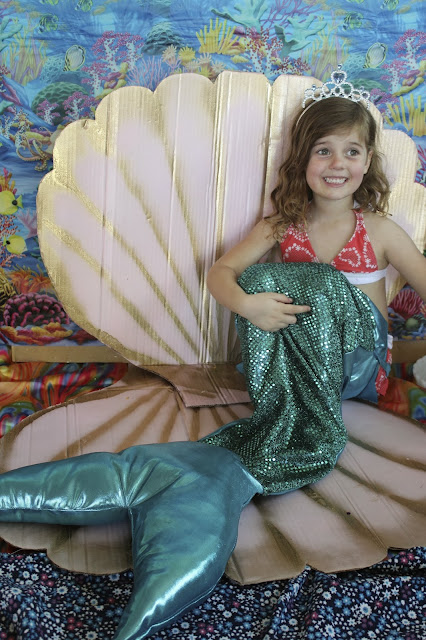 This girl had a fantastic day and loved that many of her friends stayed hours past the party to just play in her room and in the mermaid grotto. She had lots of help opening all her presents and thank goodness for Nonnas who always give you exactly what you were wanting. 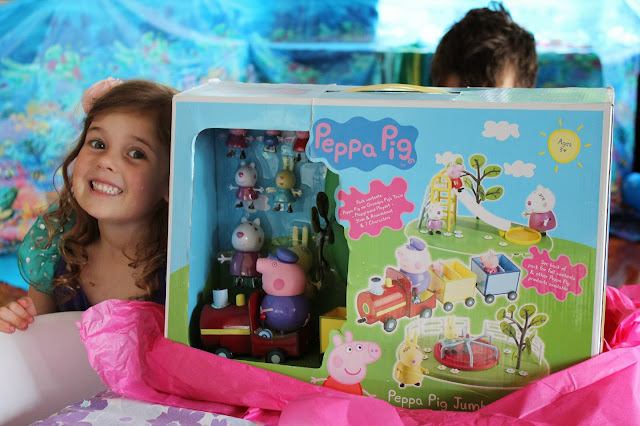 Now I just need to take a few deep breaths and get cracking on Christmas. 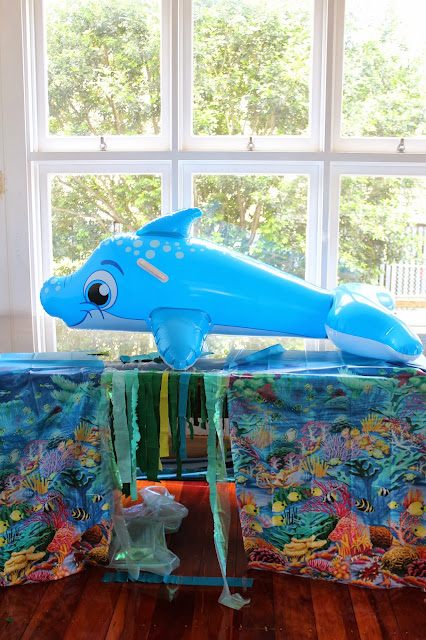 Posted by Bungalowgirl at 6:43 PM