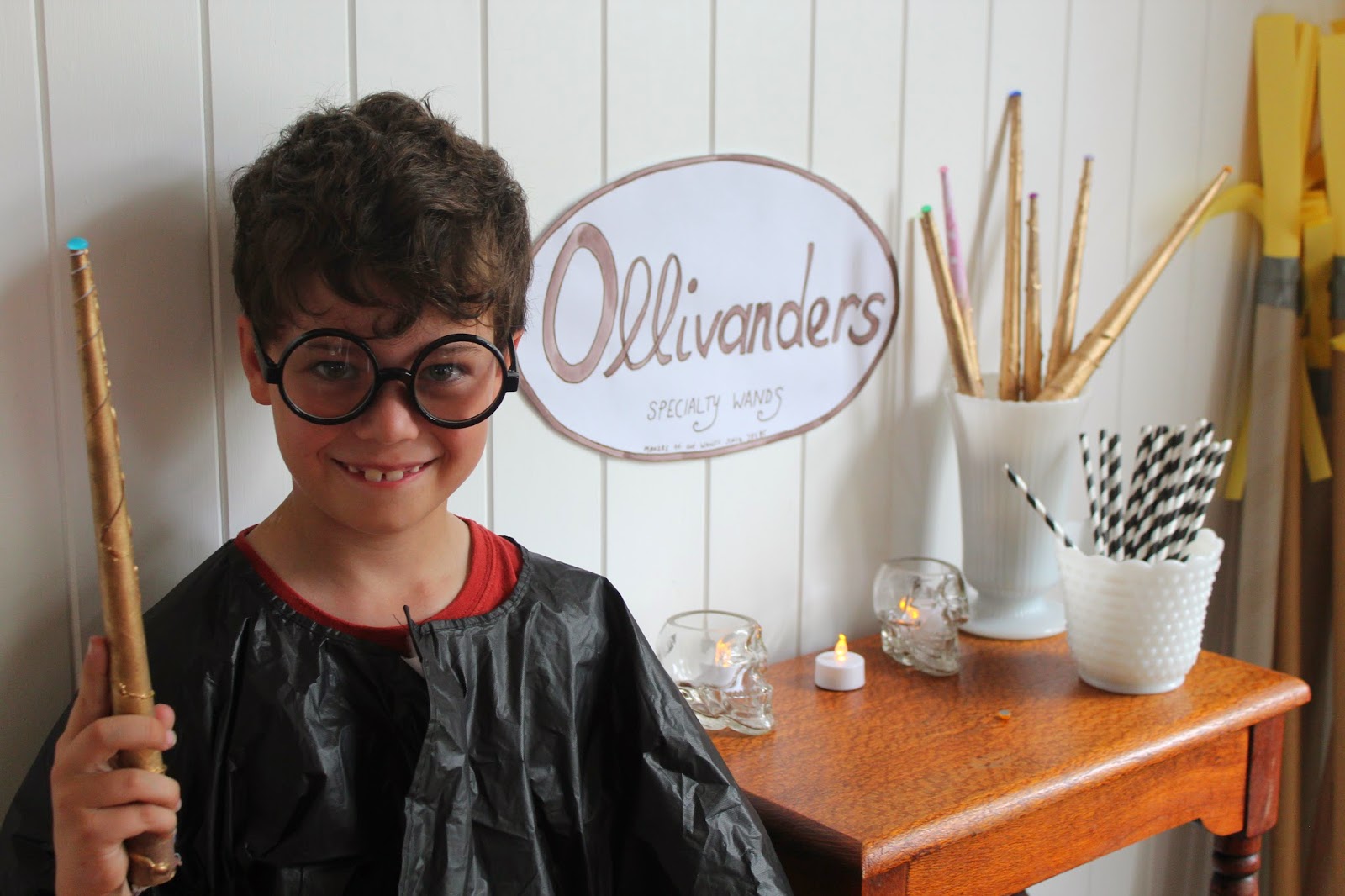 Back in March my boy turned eight. He had just read his way through all seven Harry Potter books over the Christmas holidays and most of his mates were reading too so this party theme was set. Like all our parties this one needed to be created mostly from what we had around the house and after stumbling across a few awesome HarryPotter party ideas on Pinterest we had a plan.

Invitations were sent out to his mates inviting them back to a new term at Hogwarts. He has one friend with red hair, one friend who is a girl, one who loves frogs, two who are pranksters and one who is happy to be the bad guy so welcome Ron, Hermione, Neville, Fred and George Weasley and Draco Malfoy. Little sister was keen to be Dobbie the house elf but refused to garb up in a pillowcase so came in her Christmas elf suit with embellishments. 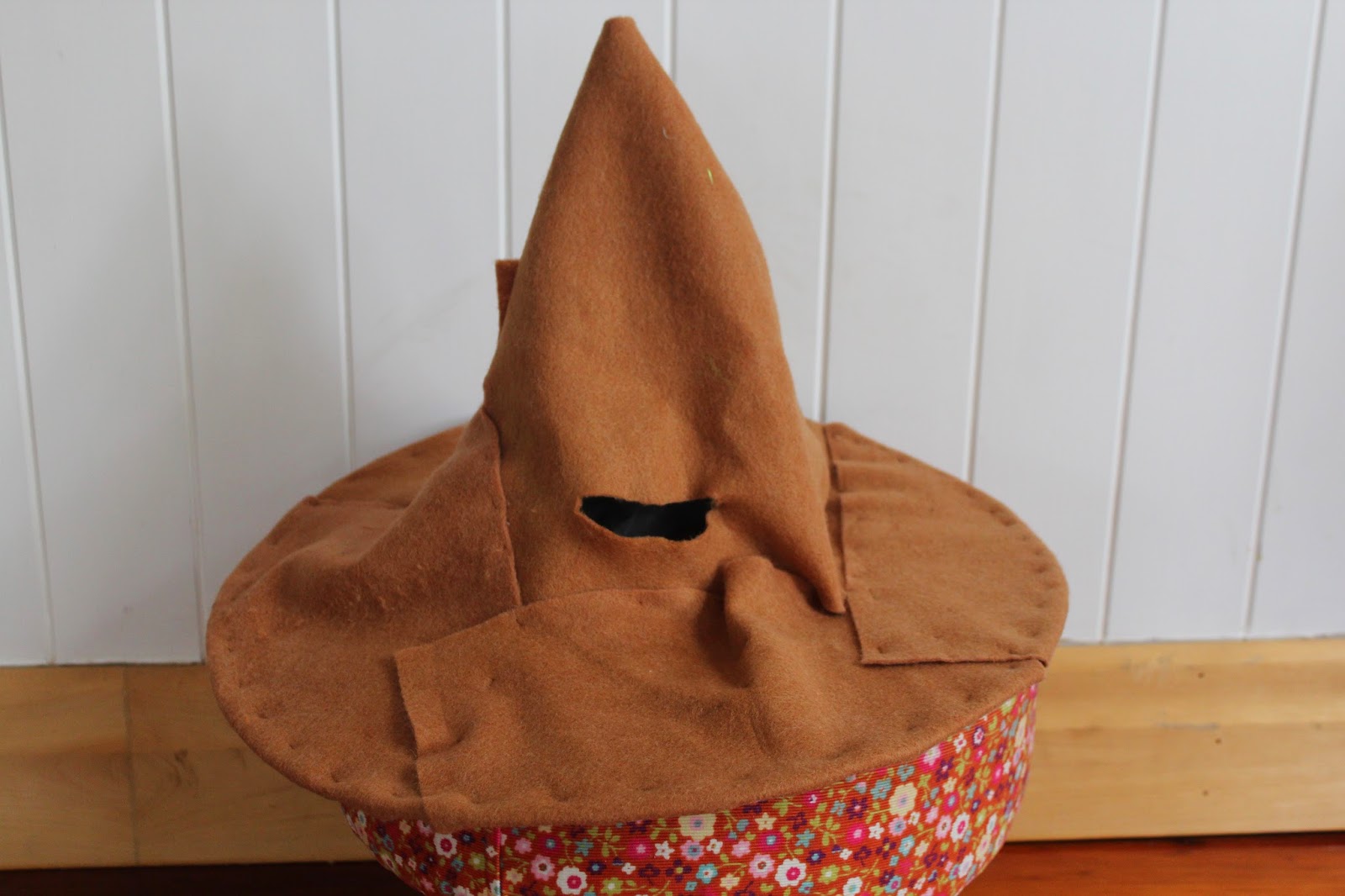 First up we had a sorting hat ceremony. I quickly sewed some felt onto a witches hat from our dress up box. We poked a mobile phone into the mouth hole and lo and behold as each hat passed from head to head it told everyone which house they would be in. Lots of Gryffindors obviously! 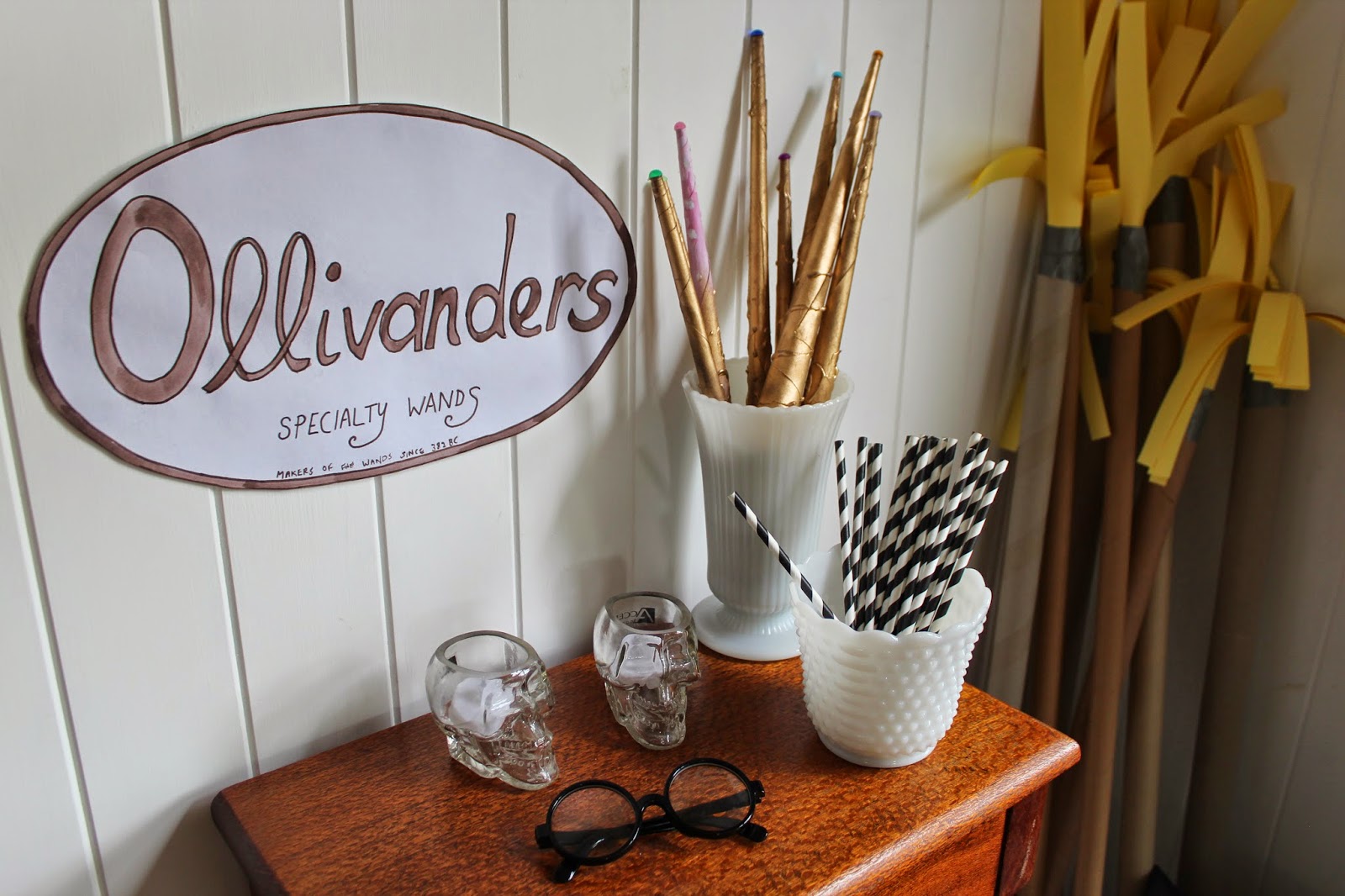 Then it was off to Ollivanders to choose a wand. We made the wands out of tightly rolled paper, spray painted and embellished with hot glue ( I found a tutorial somewhere on Youtube). Phoenix feathers optional. 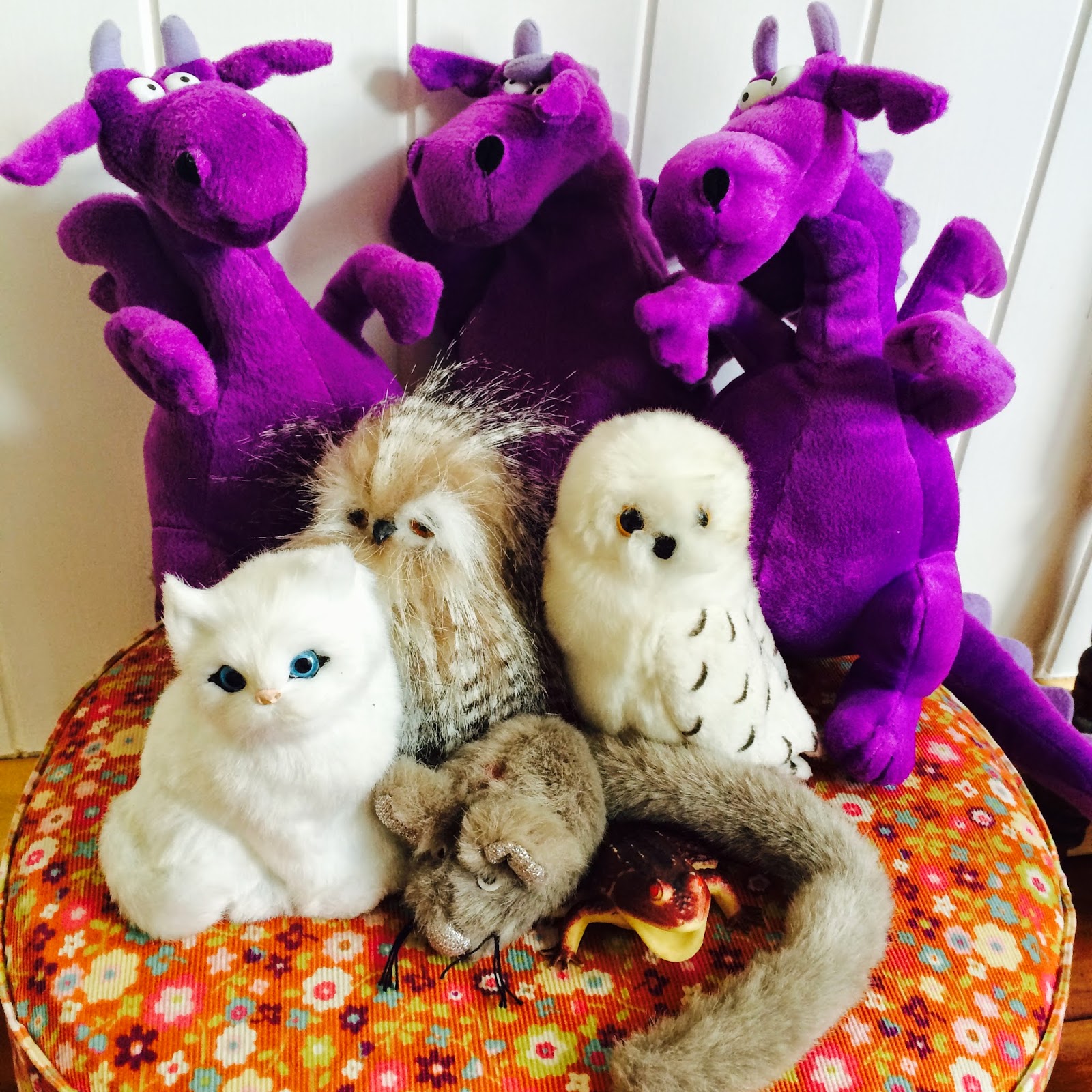 Then it was straight into our first class, Care of Magical creatures. I rounded up all appropriate creatures from the toy boxes and hid them around the garden. When all creatures were located we had a quiz that determined the security code for Gringotts bank. Once the code had been cracked each wizard received their stash of Galleons to spend later at Honeydukes.

The wizard who located Neville's toad also received the first Golden Snitch of the party. As packs of Ferrero Rochers come in five's, we only had this many so they were highly coveted and an incentive to win games. 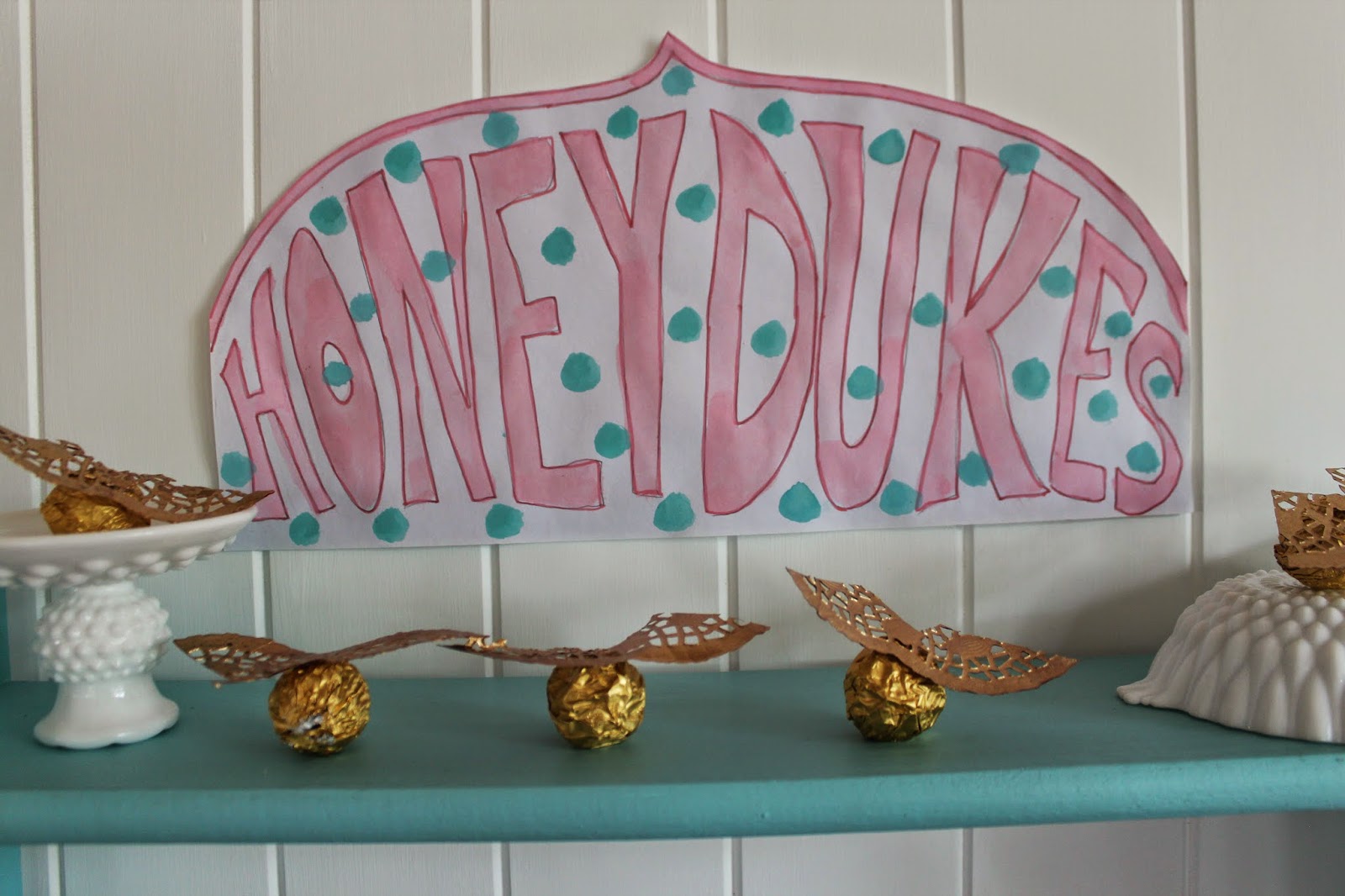 Next up was what turned out to be the absolute highlight of the entire party. Potions class. Basically lots of bottles full of vinegar with different food colourings and lots of gruesome names. Add that to bicarb of soda powder aka powdered unicorn horn and lots of sludgy, sloppy, foul slurries in various colours and a selection of beans and seeds and a mortar and pestle or two. My personal favourite was pearl tapioca cooked up with a dash of pink colouring which made spectacular pufferfish eyes. 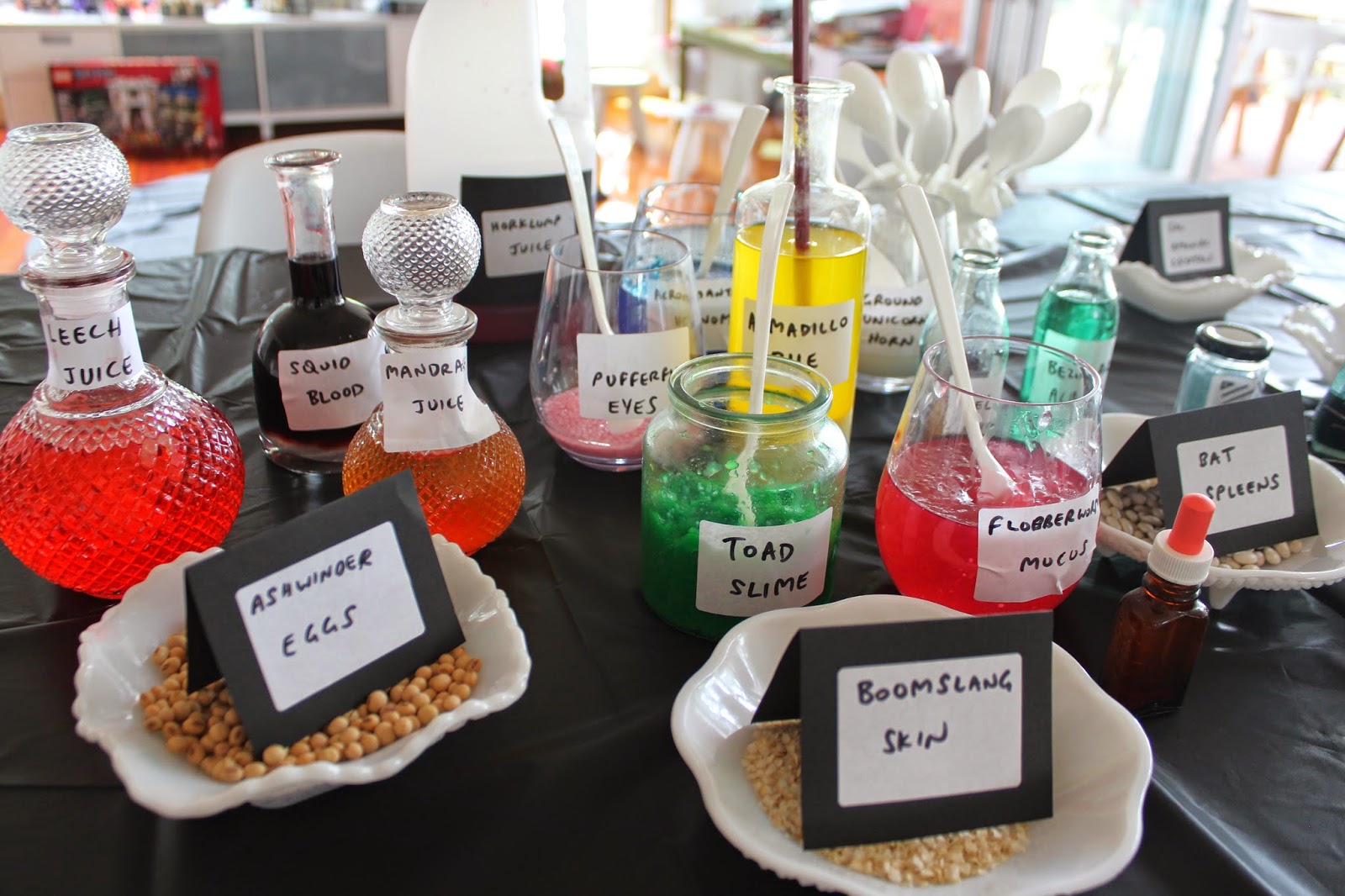 We had a few lessons in particular potions from Professor Snape (Legoman in a wig) and then we left them to it to concoct the most disgusting foul potion. Another golden snitch for the winner of the most foul and as everything was edible they all had to try their concoctions as well- this led to hysteria interspersed with gagging. 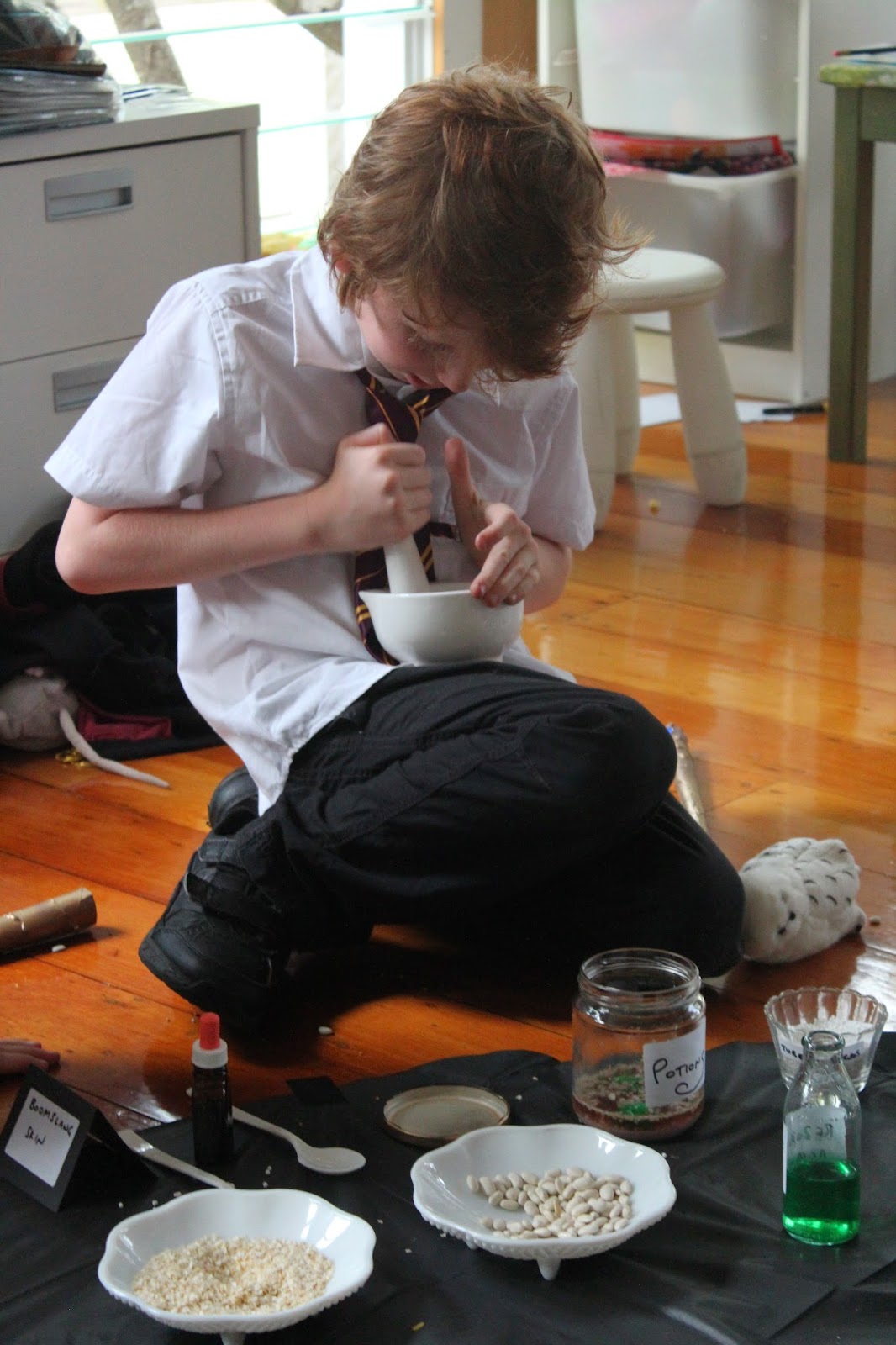 So for the next hour there was much grinding, 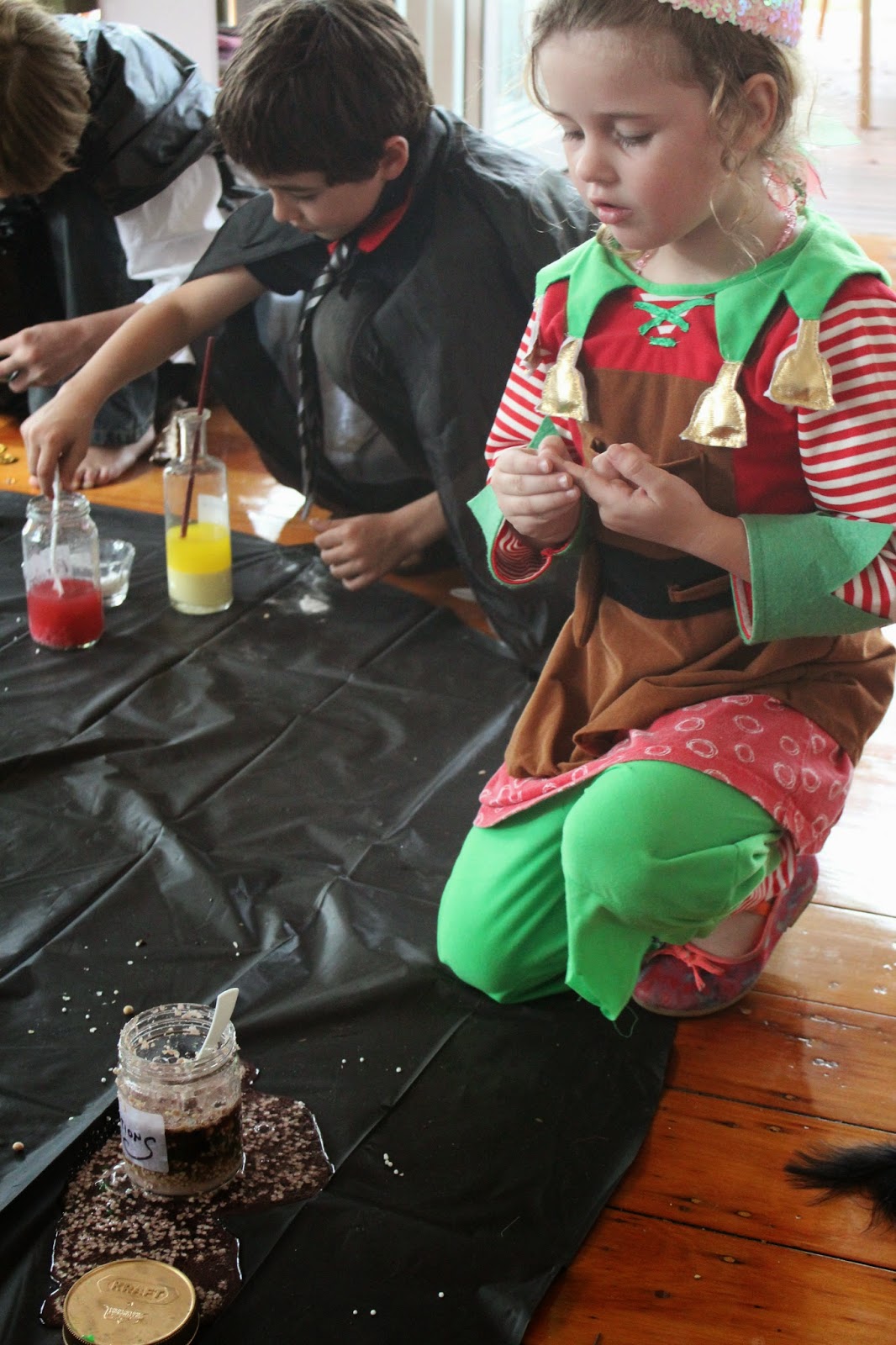 mixing and sloshing. I had stuck a massive black tarp down on the lounge room floor but of course it was nowhere near big enough. 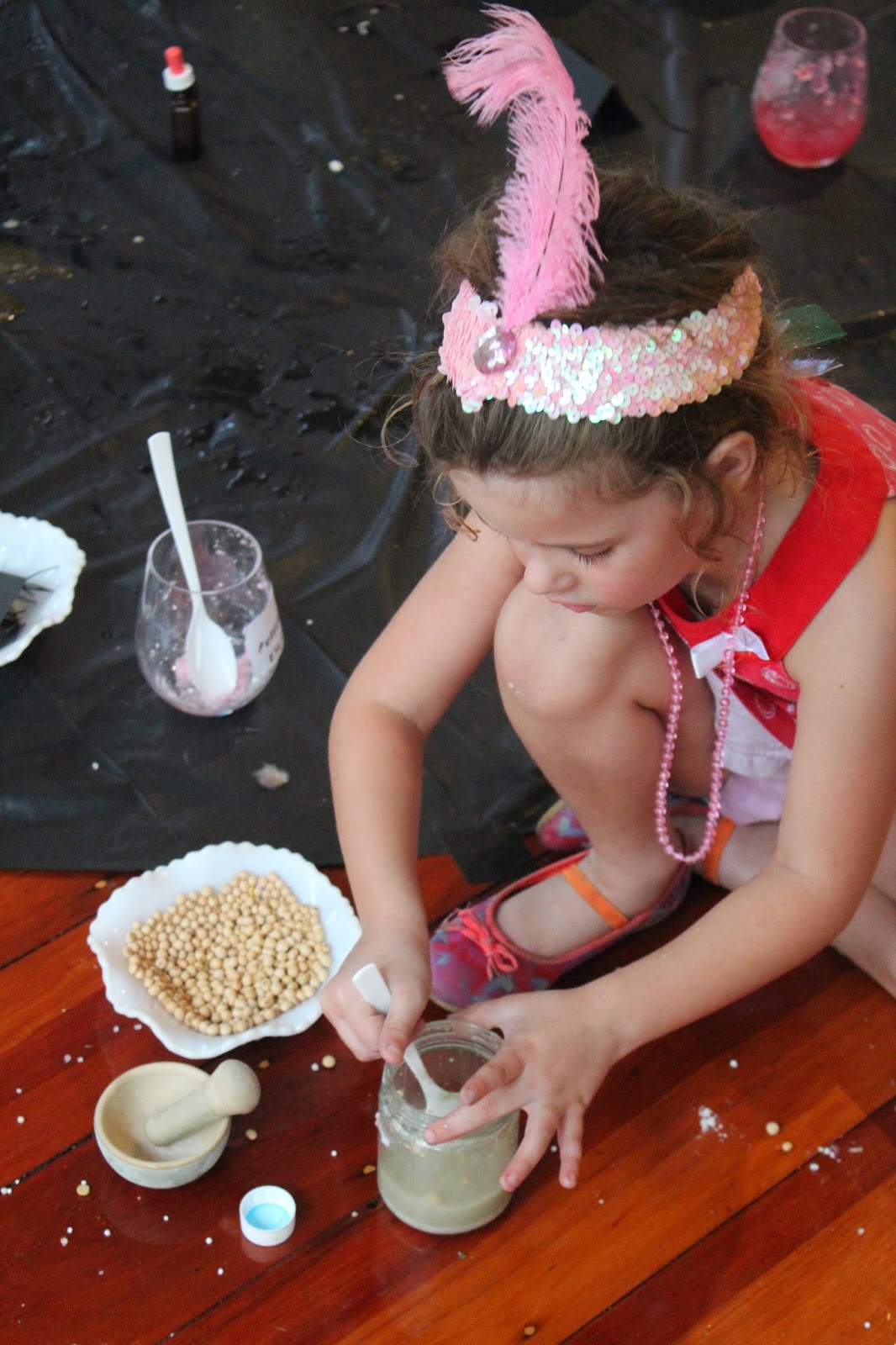 Lets not forget the tasting, 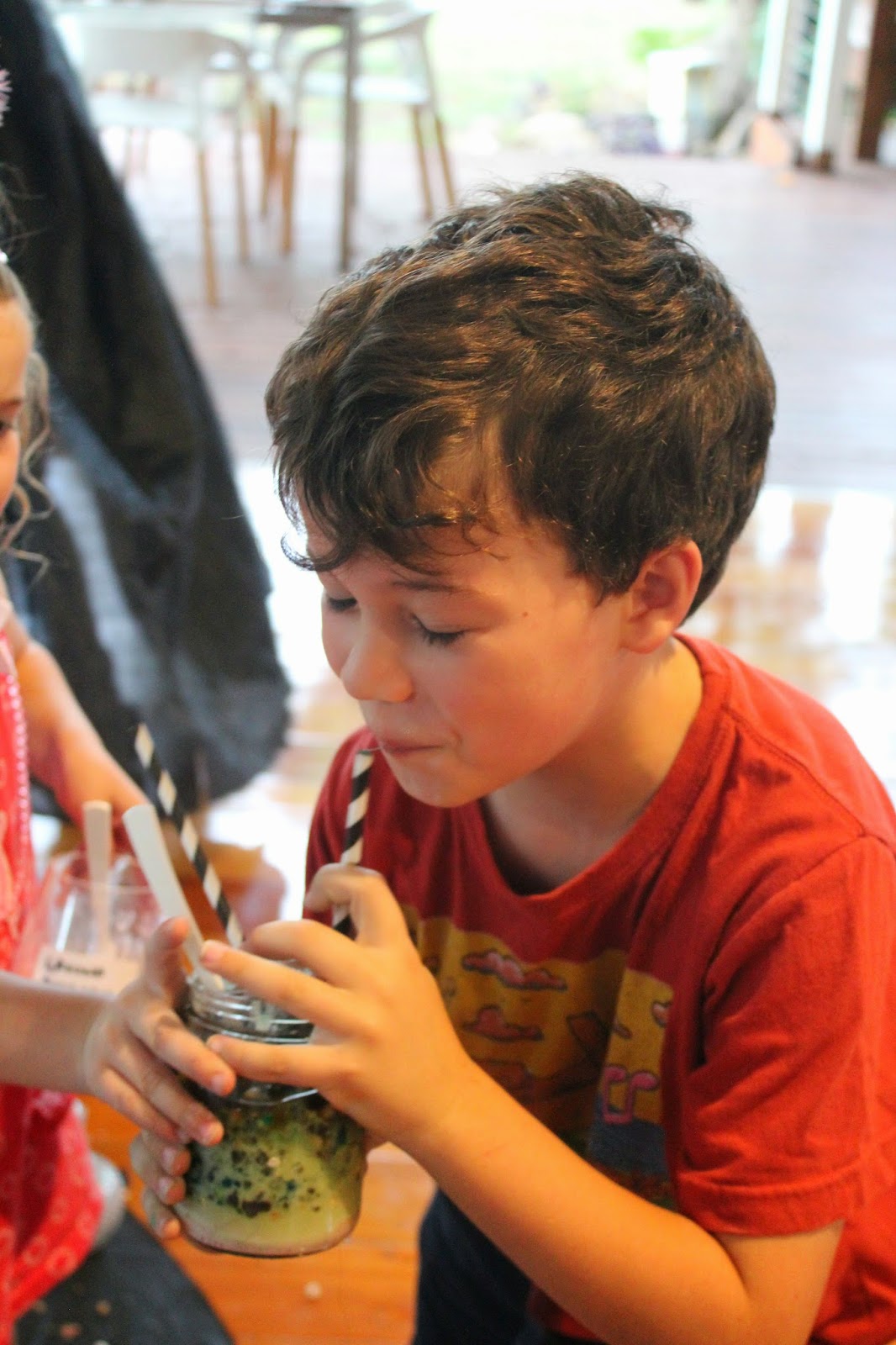 and the collaborative creating. They used up every last Ashwinder egg, rat tail, unicorn horn and pufferfish egg available. 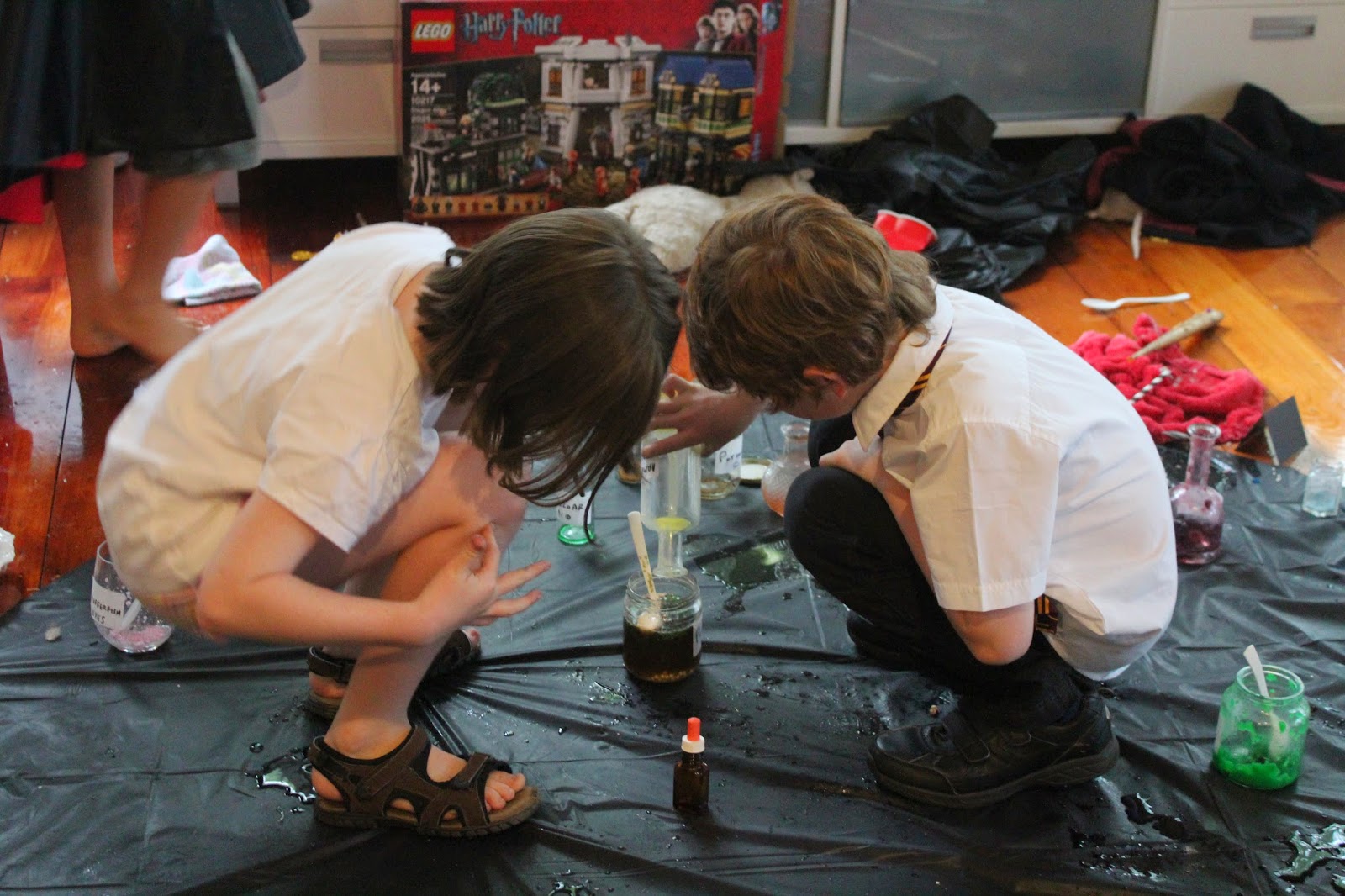 It was essentially every eight year old's idea of awesome ( that's Legoman's old Harry Potter set in the background, this is the first birthday in years where the birthday boy did not receive Lego).

The cleanup was also interesting. 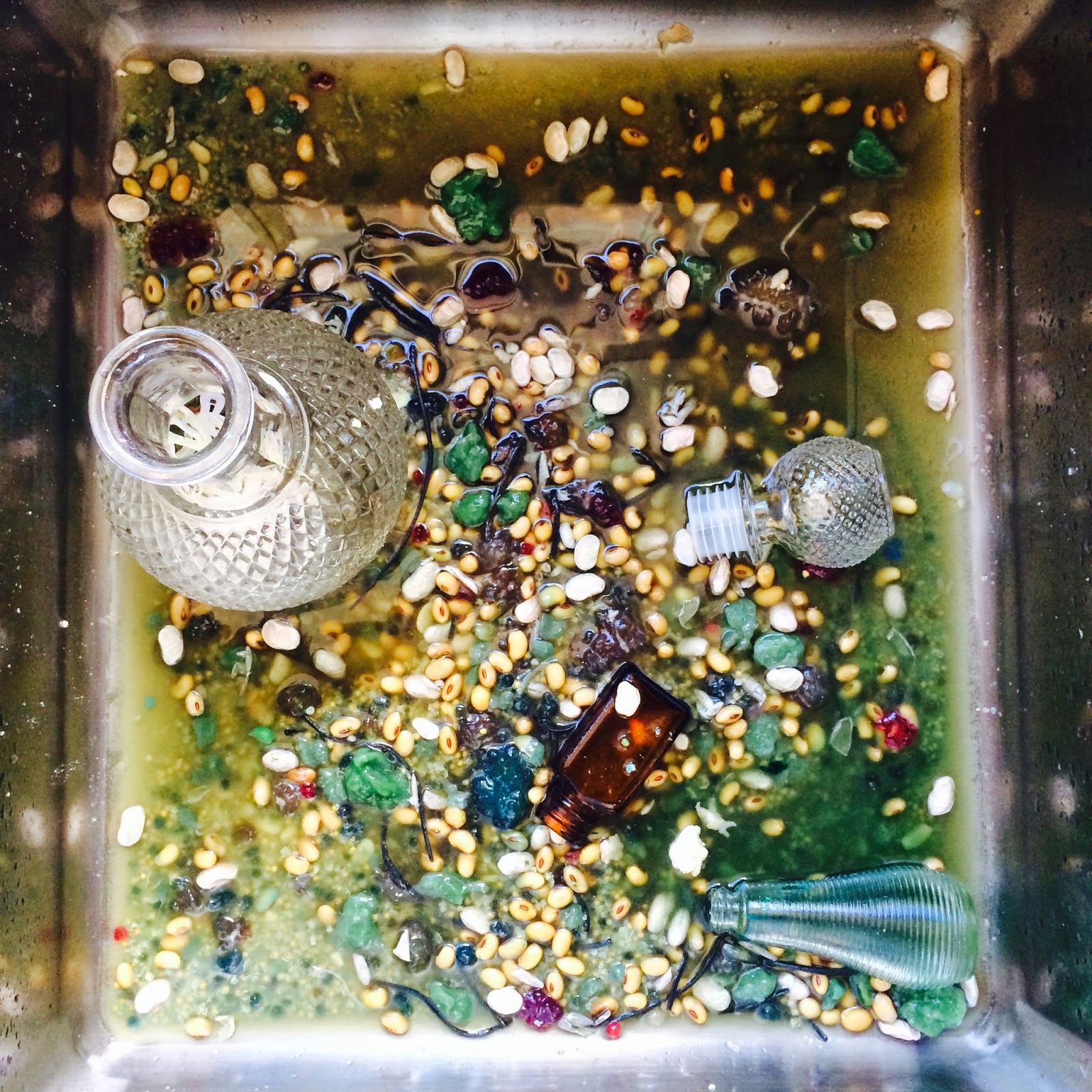 Then it was time for some Quidditch. I had nabbed the cardboard rolls from leftover fabric rolls at Spotlight, the staff were happy to let me take a few home and they made great broomsticks without concern of broken limbs if anyone got too enthusiastic. 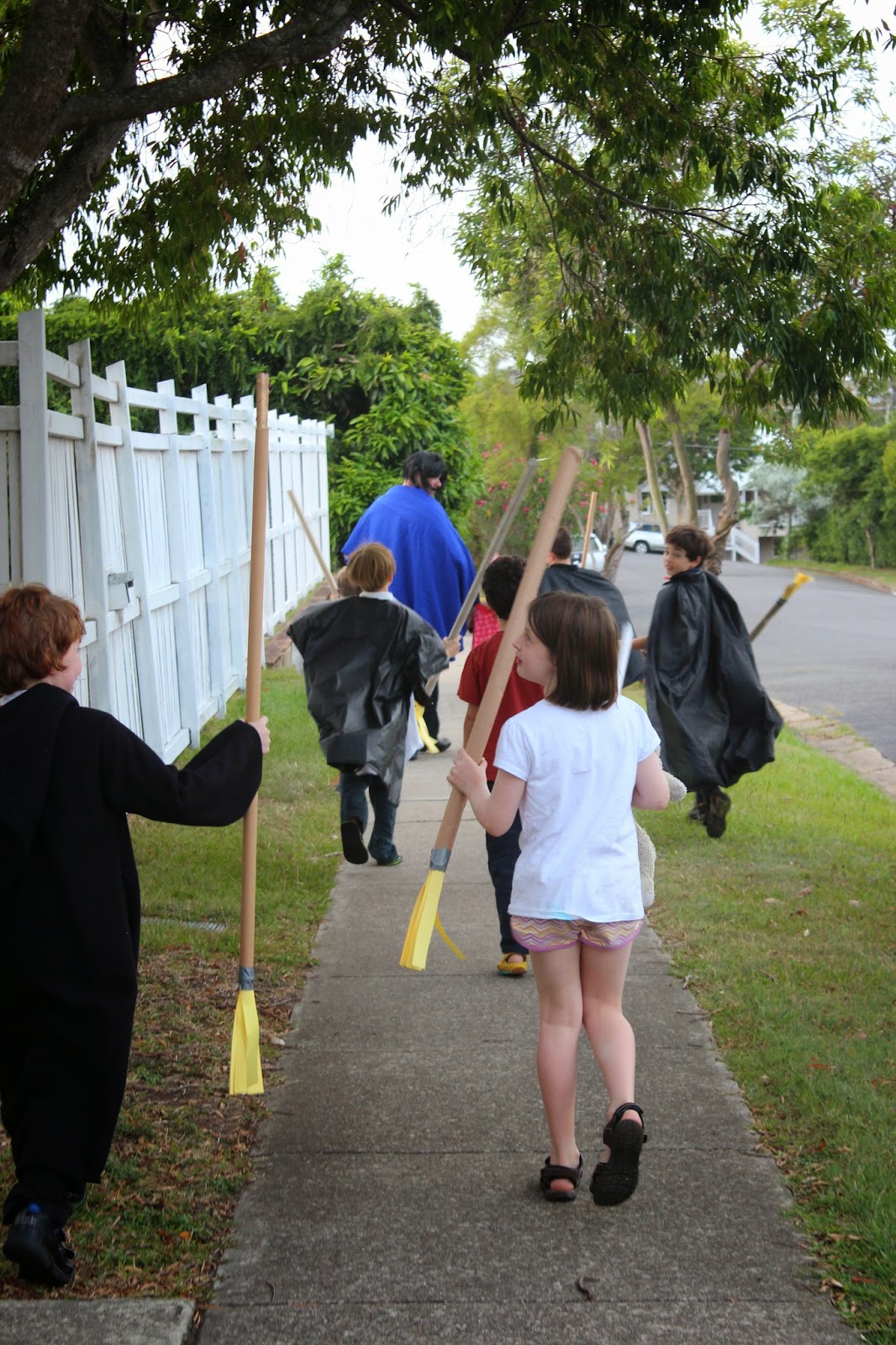 With seven kids it is the perfect number for Muggle Quidditch. Two beaters, two chasers, two blockers and one seeker. Poor Legoman had to run fast as he was the snitch. 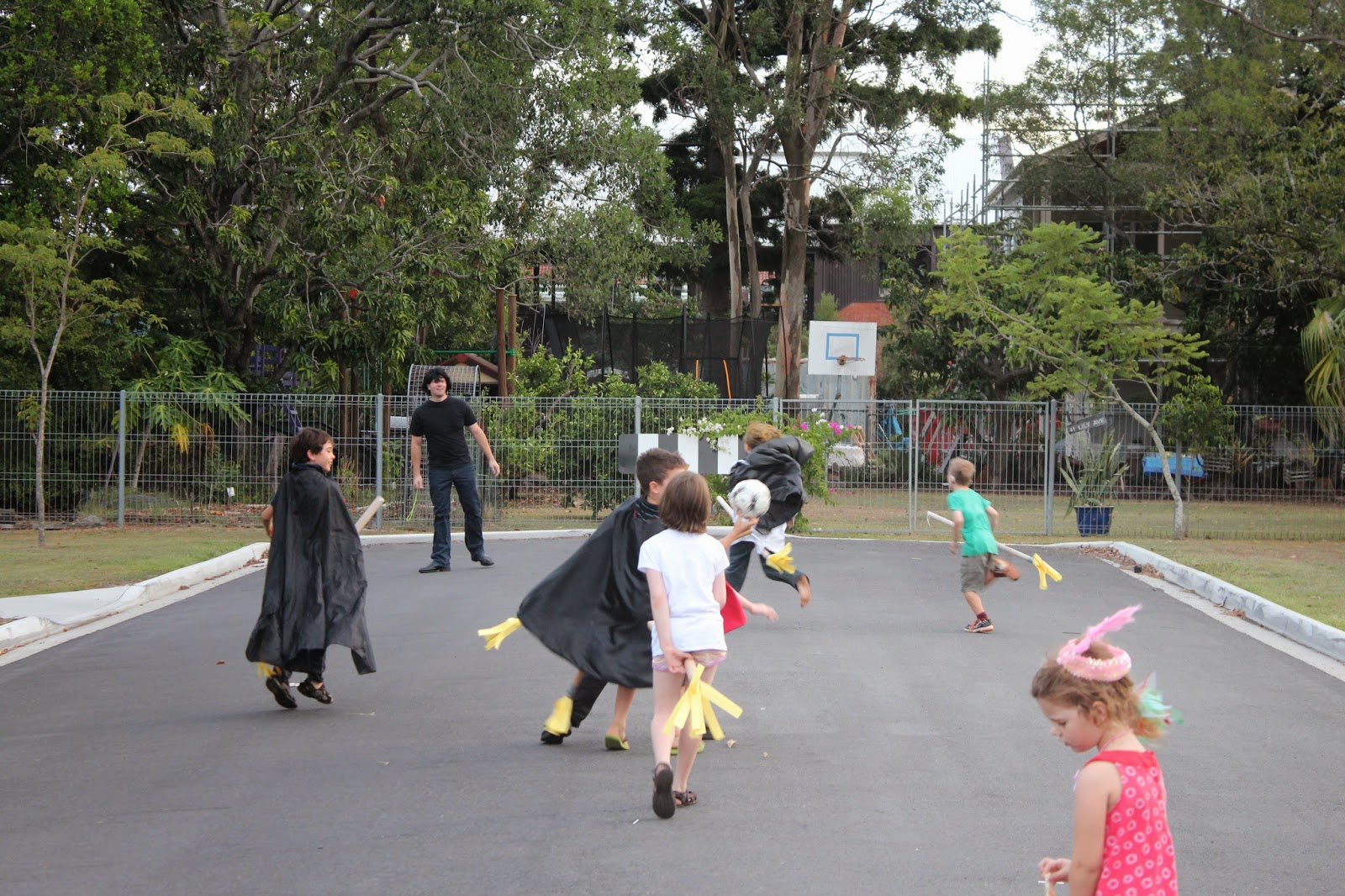 And then we staggered home to spend those hard earned galleons at Honeydukes. I had written a full list with prices for each item and the kids took it all very seriously as they calculated which treats they could afford. 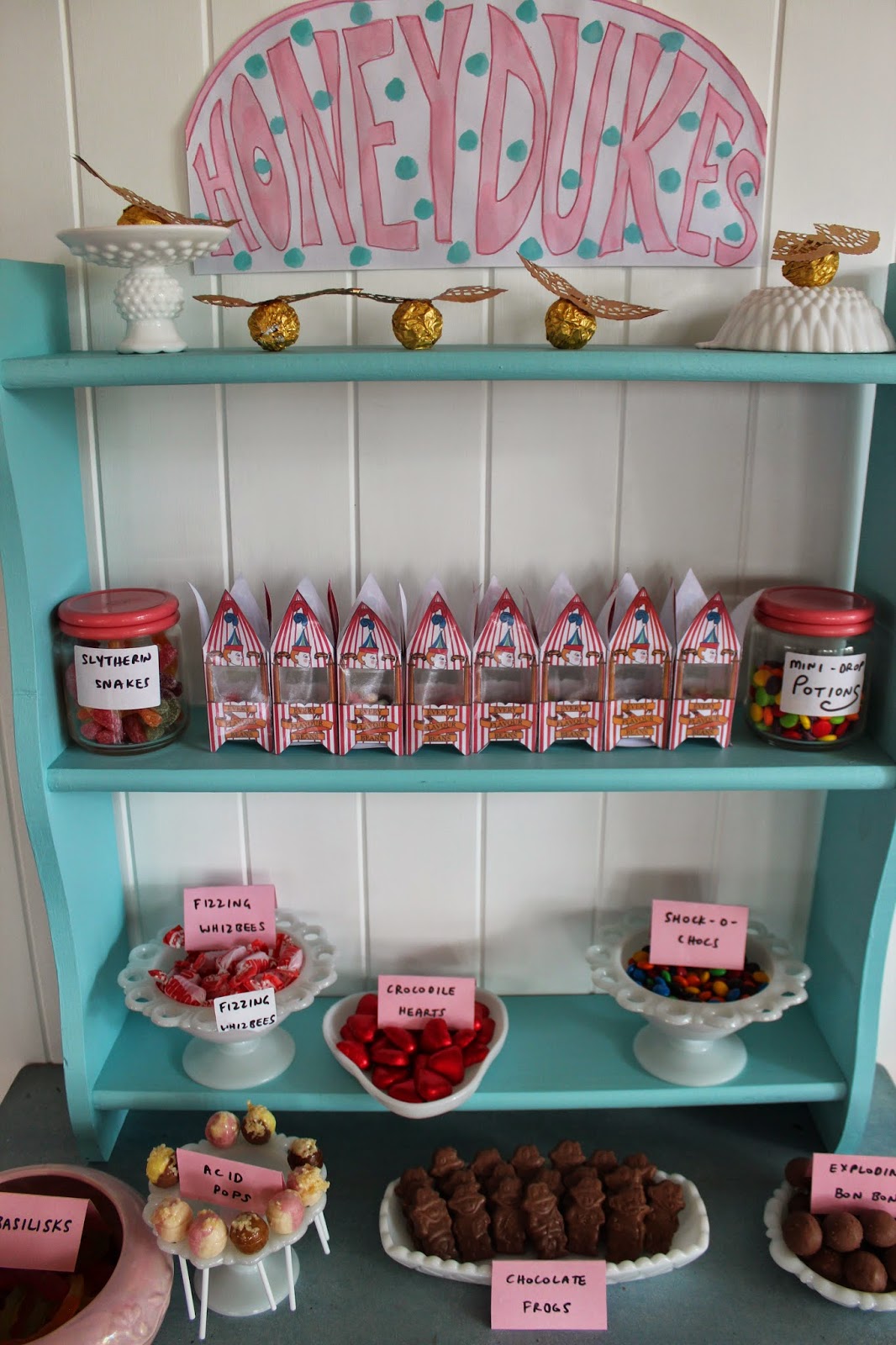 And only Legoman could cope with the tedious job of cutting out and assembling those Bertie Bots ever flavour beans packets that I found as a free printable. 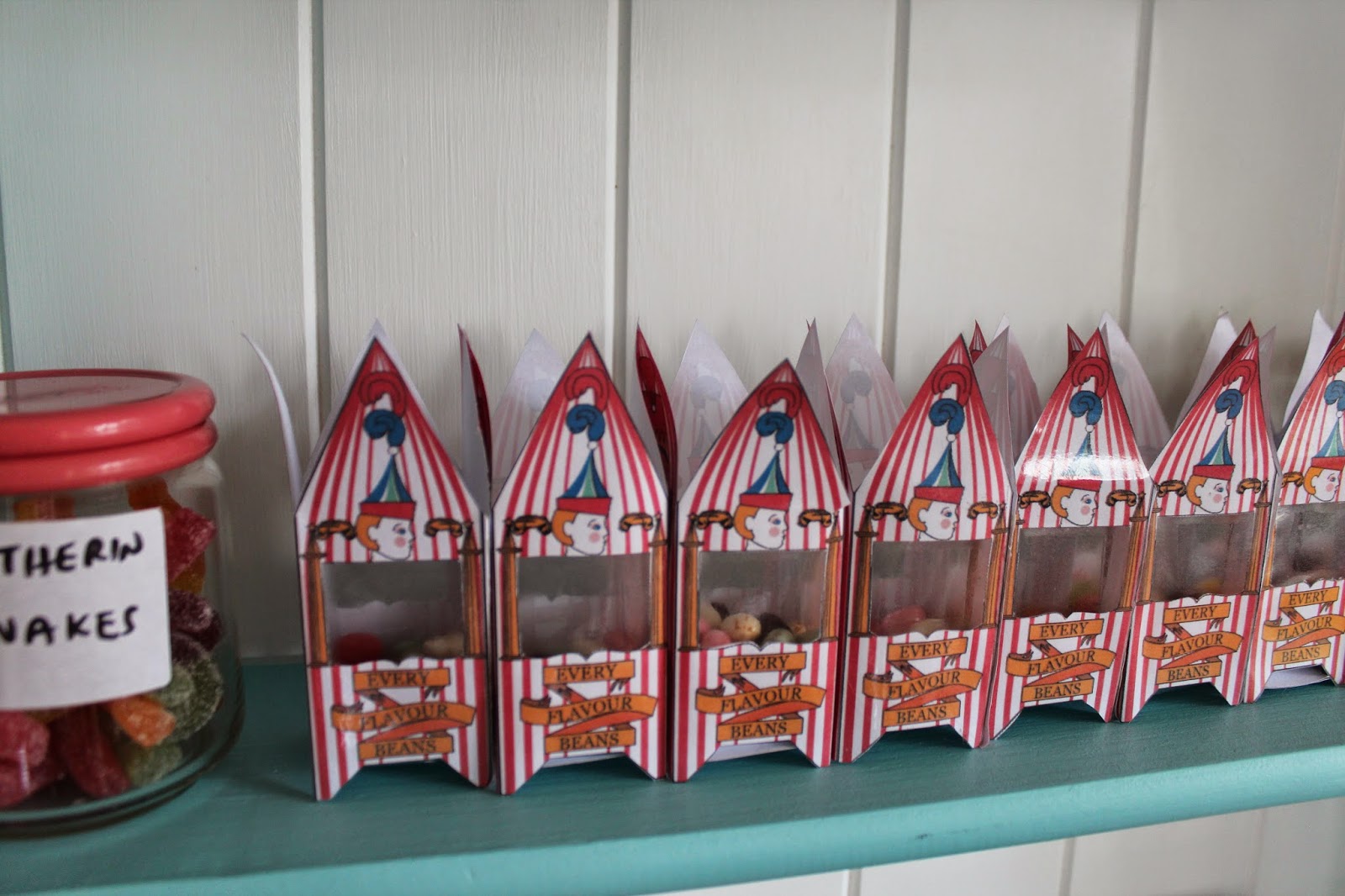 And then finally a slab of the fastest cake I have ever slapped together at the last possible minute. 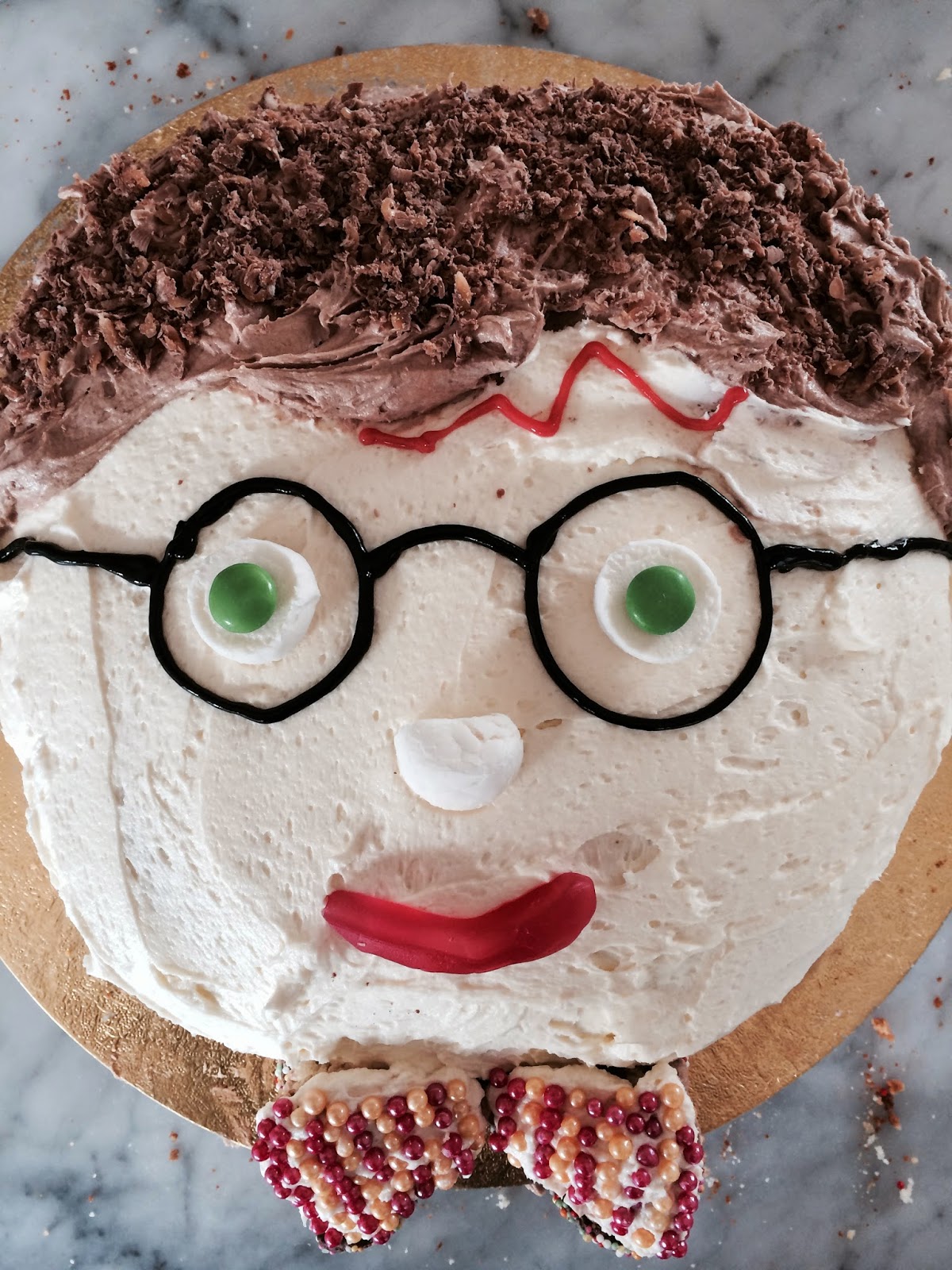 And that is how we do a Harry Potter party. Thank goodness I now have nine months to recover before the next one rolls around. I am wondering though if this may be then end of the road for parties for my boy, in which case it is good to go out with a bang. And this was all he wanted, this eight year old of mine. 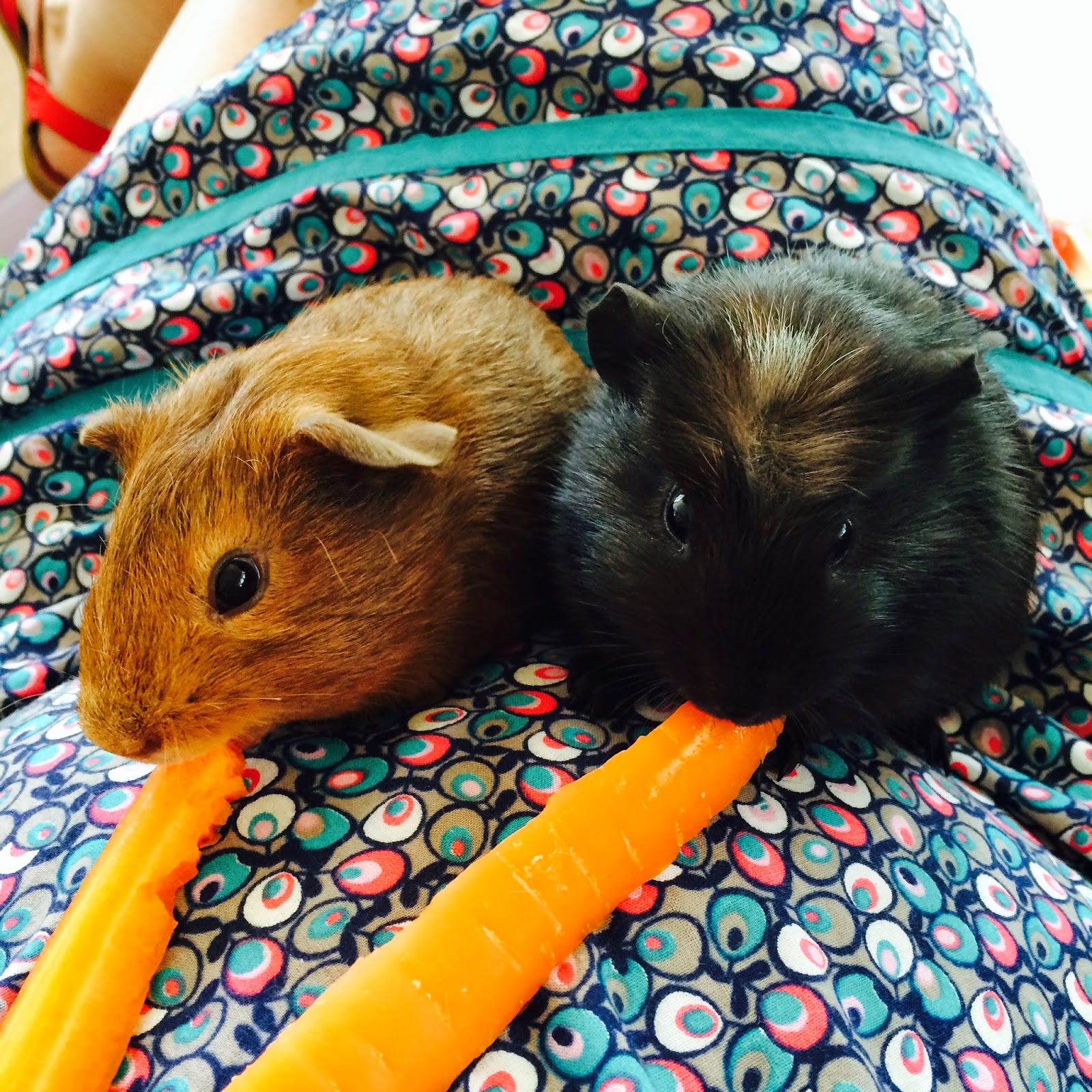 Cookie and Jet, welcome to the menagerie.
Posted by Bungalowgirl at 12:39 AM