Honey, I shrunk the bees 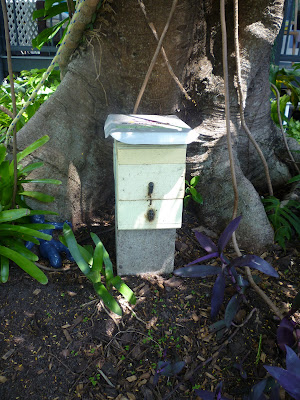 Thought you might have been wondering what this little yellow box was at the base of our poinciana tree from yesterdays post.  This is our beehive. But not just any bees, no, these are the infamous Australian native stingless bees ( yep I'd never heard of them either).

You see other than Lego which is Legomans life passion and only vice, his other genuine interest is bees. For several years there has been acquisition of bee books and grilling of honey sellers at markets. There were several stimulating debates on the subject  as I provided a voice of reason that with small children who have allergic tendencies,  traditional bees with the whole fancy outfit and smoke bizzo would not be a great combination.

So he did his research and then sold me on a hive of the native stingless variety and ordered them from here . And of course they were the highest priority on the weekend that we moved house, forget the truckfuls of possessions that required unpacking and sorting. Much contemplation went into the correct placement of the hive as it must not have too much or too little sun. Also once the hive is placed it can only be moved less than a metre or more than a kilometre otherwise the bees radar can become scrambled and they may not find their way back to the hive.

They are quite small- like a compact little black fly with no obvious buzz and obviously no sting. They do however produce honey- a small pot every month but it takes 9 months to get the first pot so we'll get back to you in April  as to how it tastes.

Like others in our family they too have some interesting quirks. They don't bother getting out of bed unless it is 18 degrees celsius- sounds like a supermodel kind of demand to me. In winter this means they are often not staggering out until around 9-10 am and are all tucked up in bed by 4 pm.

Recently we also had some interesting swarming around the entrance of the hive. We consulted our trusty bee book to discover this was part of a battle to the death as a rogue faction of bees from a different hive were trying to invade ours. Sure enough our neighbours observant 8 yo spotted all the dead bee bodies piled up in front of the hive. And here was I thinking they just rehearsing for an aerial display.........

This went on for a few weeks and was slightly annoying for the kids as the swing went through the swarm and then one day it was all sorted and life went on as normal. ( well perhaps not for the several thousand casualties) We did start with 5000 in the hive and we haven't been able to do a roll call to see if everyone was accounted for.

If you get up really close to the entrance pipe of the hive you can see them returning from their travels with little pannier bags on each side filled with different coloured pollen- mostly white, yellow and orange. Unfortunately I don't have the macro camera skills or equipment to show you but there is also a hive within a log at the Mt Cootha Botanical gardens as part of the kids nature trail.

And if you jump over to here you can get more info on the bee hives, chickens for hire or purchase and a range of really cool creature kits for kids as well. Trying to decide if Roboboy is too young for stick insects for his 5th birthday, might have to start with ladybirds.............
Posted by Bungalowgirl at 9:37 PM