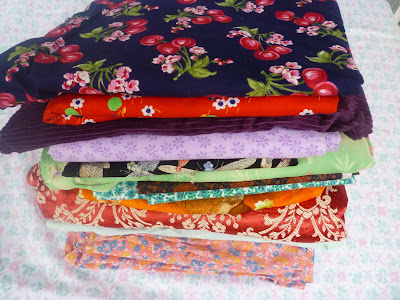 At the school fete we went to on the weekend I was a woman on a mission. With a plan. No matter what, our house was to stay in a Negative Stuff Balance. That is, as we had recently donated a TRAILER load of stuff to charity, under no circumstances was anywhere near that  amount of stuff coming back into the house.

I left the kids (stamped with all day ride passes) with Legoman and hit the hall right on opening. I did not even look at toys, glanced over the kids books ( bagged a few), had a brief ferret in the kids clothes (the mounds were so high even I was overwhelmed) but did snag some corduroy pants for Roboboy complete with leather cowboy pocket and edging. He was impressed as he shares my fond appreciation of all things corduroy but wants me to sew something over the cowboy. 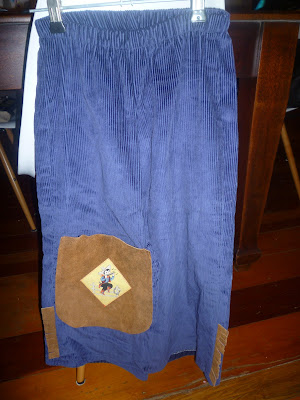 A super fast scan of bric a brac and proud to say NONE purchased.

And then I stumbled onto the manchester corner. And no one was even nearby. On the top of the pile a glorious Grover Purple chenille bed throw, minor fading in parts but still awesome. I'm not sure whether I should applique some patches over the faded bits or chop it up. I'm leaning towards patching if Roboboy is keen on it. There were actually two but the other one had alot of stains so I let it be. 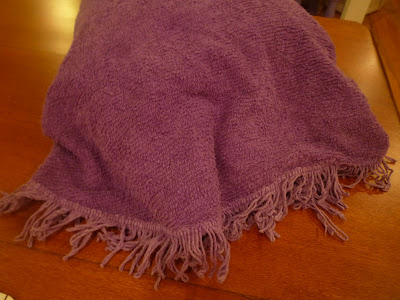 Hidden under the sheets and blankets were three boxes of fabric - all $1 per piece. The pile in the top photo was only about a quarter of the stash on offer but to maintain the negative stuff balance I was selective. I also found a pile of felt and beads all untouched so they had to come home too. 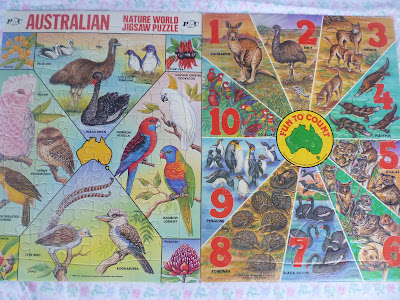 Two glorious Australian animal puzzles. Roboboy was straight onto these the minute we got home. I love Australiana and if it's educational as well it's a winner. I had just given away some Postman Pat  puzzles so Stuff Balance = Neutral for this one. At 4 oclock the fete was winding up and it was announced that a bag could be filled for $2. Despite this and the fact that that Legoman and the kids snuck back in with me, we only filled one small bag. Stuff Balance still overwhelmingly well short of  a trailer load. Now I just need to finish painting the curbside find and set up my sewing machine.
.
Posted by Bungalowgirl at 9:29 PM