Love a good Fete in May 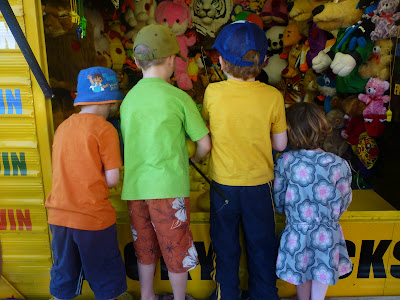 Nothing better on a gorgeous clear blue skied May day than hitting a local school fete. We have five  primary schools within ten minutes of us and as Roboboy and his old playgroup friends are spread around all five of them, there is a good chance we will run into some mates. This was the much begged for opportunity to fish for ducks and win a prize. Two best mates in green and yellow chose water pistols, Roboboy in orange, chose a stuffed toy lizard. I suspect that like us, that their highly visible T shirt colours were selected for ease of spotting in a crowd.   Liongirl (having not paid to catch ducks) won the man over with her smile alone and received a little stuffed duck toy.

I didn't see Roboboy for a good hour or so as he and his mates just did back to back turns on this. 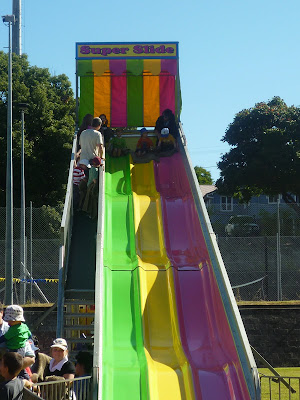 He is not a fan of things that spin/rotate/lift off the ground but super slides he has had a thing for and has been tackling these solo since about 4. The view from the top was amazing- level with the top of the main school building. Thankfully I had the excuse of Liongirl being too small to do this alone, so we did a few runs together- pink lane of course.

She was more than happy on her new favourite ride, the carousel. She has been on several of these recently and is a little obsessed. She was sitting on Legoman's lap tonight looking at his laptop and excitedly declared CAROUSEL, at the sight of a red retro coffee machine. Hmmm. 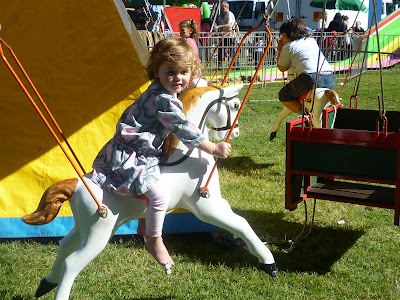 Our kids have never had Fairy Floss before so we caved into peer pressure. See this very happy face? 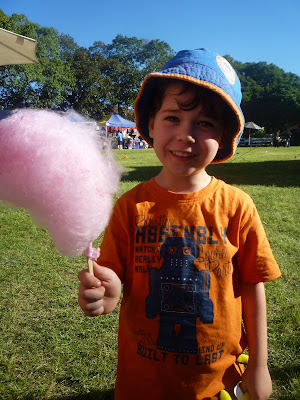 And then he was told he would be sharing with his sister..... 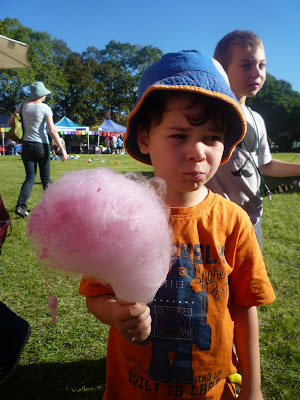 Figuring I didn't want to ruin his first and possibly only contact with  fairy floss (food colouring is not Roboboy's best friend) I relented and bought a teeny one for miss Liongirl. Sunshine all around. 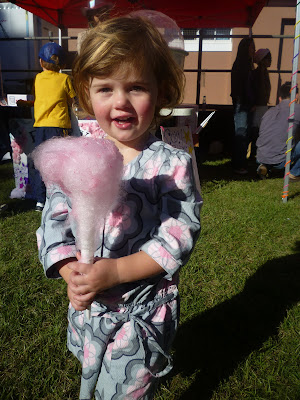 The highlight for me was sneaking off with a few other mothers to have a good ferret  through the enormous Trash N Treasure that filled the school hall. Two bags of fabric and books and crochet patterns later we all emerged into the glorious sunshine. And how had the dads been passing the time with our precious children? A game of alien laser skirmish involving alot of running around, aiming large gun like lasers at your mates with a head shot being the primary objective. Hmmm, so much for deliberately avoiding any exposure to guns for our five year olds. Very pleased later to see that despite his contact with shoot to kill our Roboboy still chose the lizard from the toy pile, over the toy gun. Although knowing him, that  lizard will be embellished with extra features much scarier than any gun. I'm thinking a detachable remote controlled tail, acid secreting glands and retractable claws. Too late tonight to photograph the fabric stash, just enough time to quietly collapse with a cup of tea after throwing on a few catch up loads of washing.
Posted by Bungalowgirl at 8:56 PM