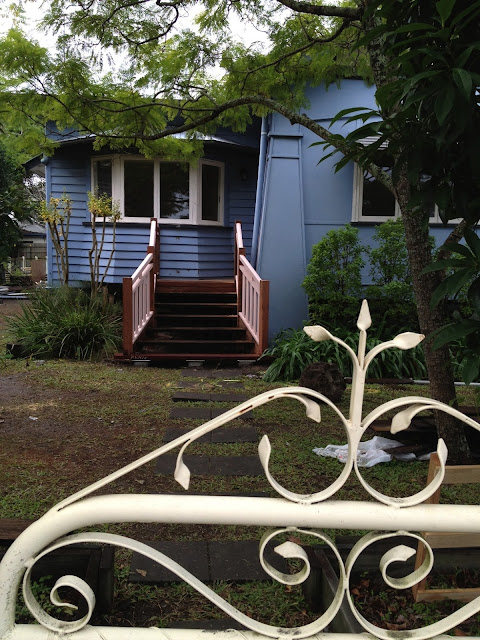 The new front stairs in are finally in and they are exactly as I imagined. Our old stairs were quite narrow and seemed tacked on and unsuited to the house. These however, are much more befitting of Betsy and her grand room proportions. Here is a close up. 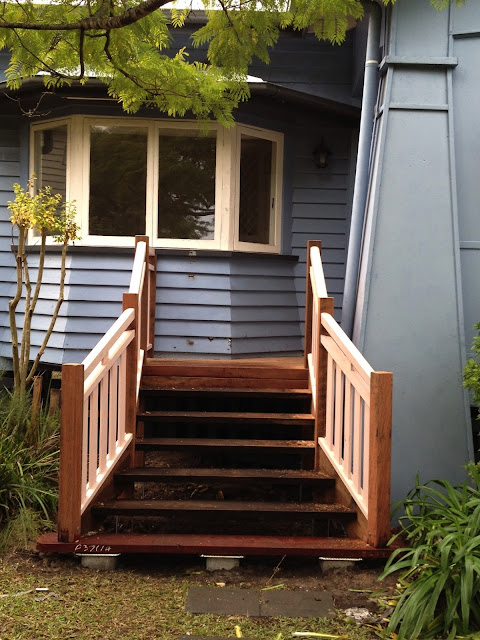 The builders had never built a set like this before. Apparently, with all the complex angles,  it took three times longer than expected. Thank goodness they were part of the fixed part of the contract.

Out the back, with a looming deadline for the deck scaffolding to be removed, we had to act quickly to get the fascia board painted on the deck roof. This would easily be five to six metres in the air and would be very tricky to reach with just a ladder. 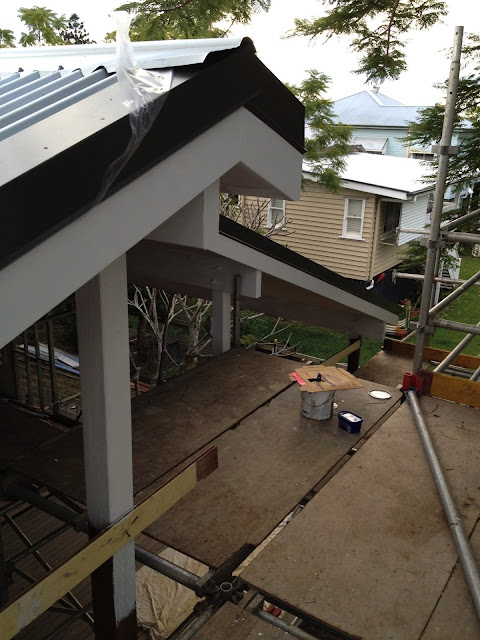 I chose Colourbond Woodland Grey for the gutters and the fascia is Dulux Vivid White. It is incredibly satisfying to see something painted to completion. 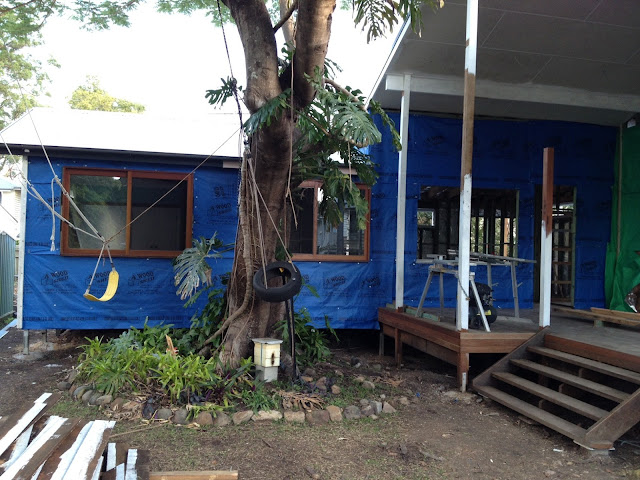 At the far end of the granny flat, the weatherboards are going up to complete the end wall. Soon there will be no remnants of the verandah that was here before. 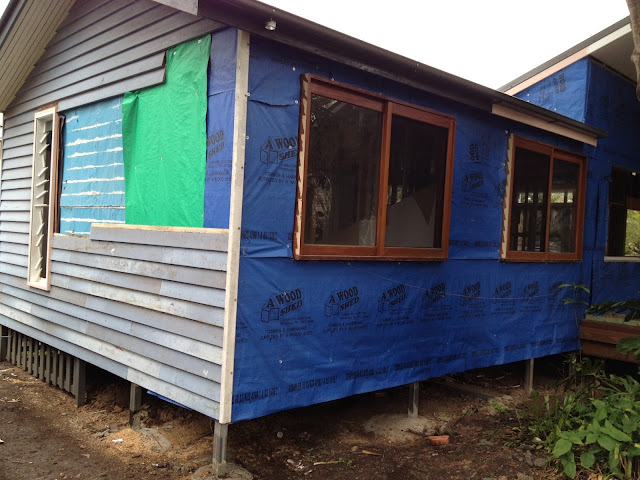 Window frames started to arrive and several have been installed. There are boxes and boxes of glass louvre blades lying around too. That's the pantry window leaning up against the wall. 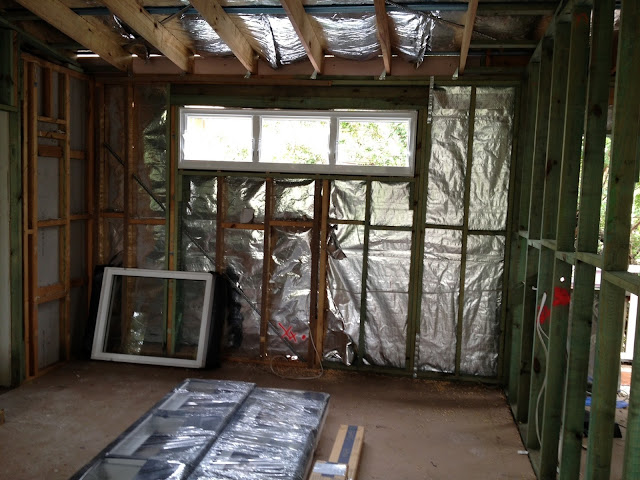 There have been significant behind the scenes dramas with the enormous kitchen window splash back. Due to some communication issues between the window company and the builder, the window ordered was too small. By the time this was realized early last week, it was too late to alter as we were informed that the glass had already been cut and the window was complete.

As I stewed over this less than ideal news I was contemplating whether I could live with the incorrect window or whether an entire new order would need to be placed, possibly at significant cost. By some miracle, five days later we discovered that the glass had actually not been cut and it would be a simple and cost free matter to enlarge the frame. Crisis averted. Here is the new and correct sized window waiting to be installed next week. 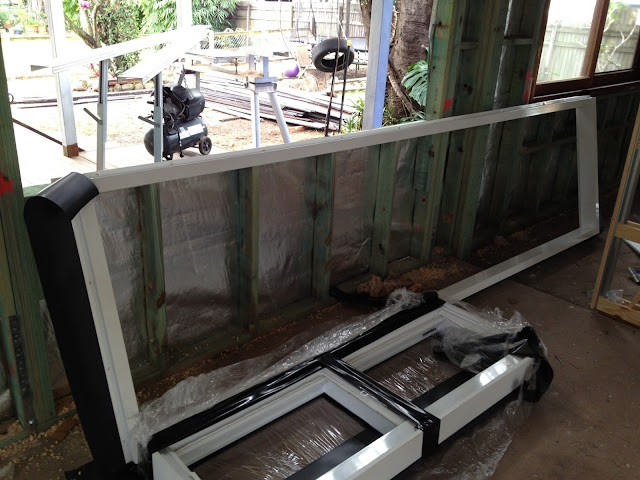 Meanwhile, the last minute laundry window addition  has turned out to be one decision that I am really happy about. This section of wall currently faces onto the driveway and street but will end up obscured from view when the carport roof is built. 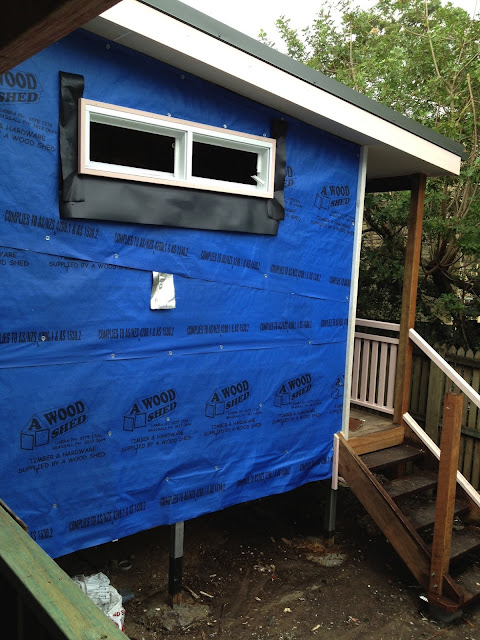 And some new interior work is visible too. The hallway down to the spare room/ playroom is open now and the frame is in ready for the new louvres here too. Coincidentally, this window is directly opposite the newly created hallway and should give us good cross flow. 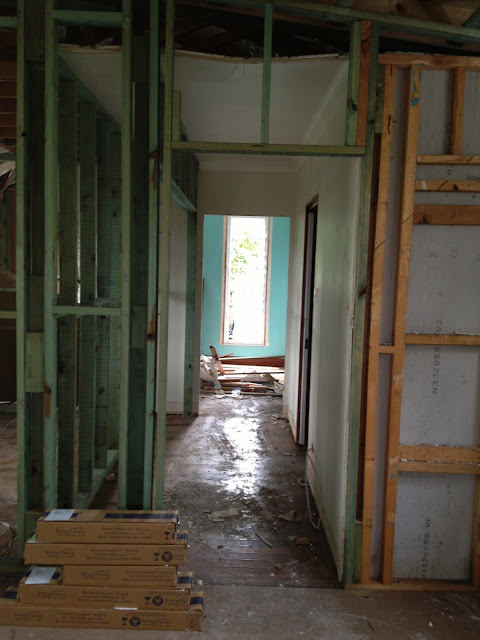 The pair of massive sliding windows salvaged from the demolition yard are in. 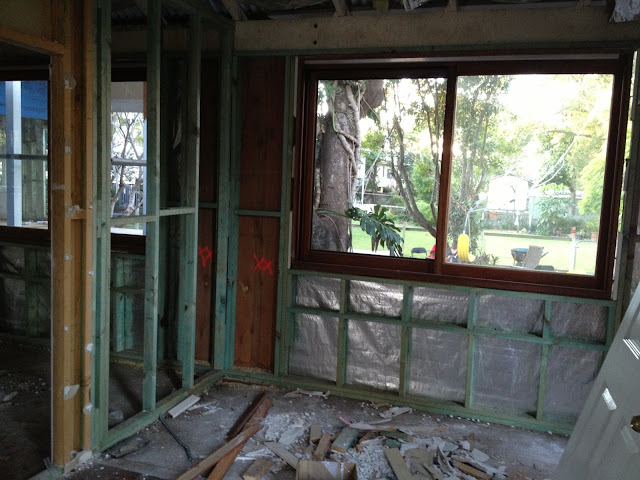 And the massive louvre frame for the lounge room is also in and the wall linings are happening. I think it is well and truly time for the old washing line to visit the skip. 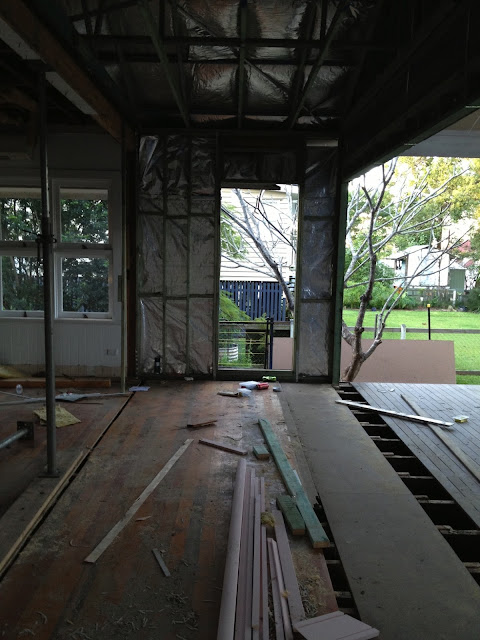 Anyway, we are off to make a start on painting that deck ceiling. Hopefully the weatherboards start to go up next week. Then I'll really have to knuckle down and make a final decision about the exterior house colour. I think I'm 95% there. 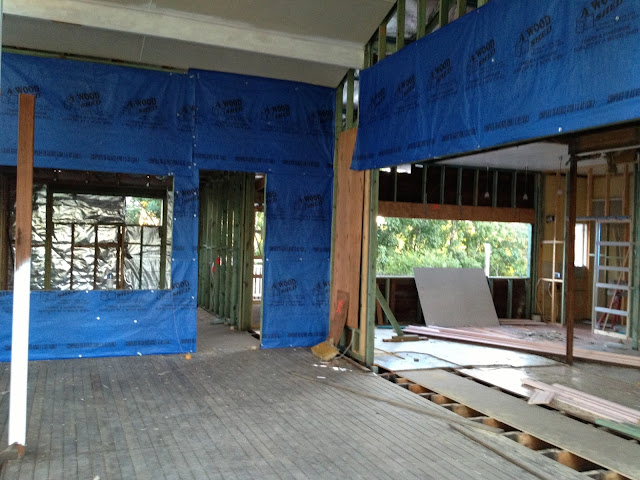 Posted by Bungalowgirl at 1:34 AM