Husbands with opinions (and other annoyances) 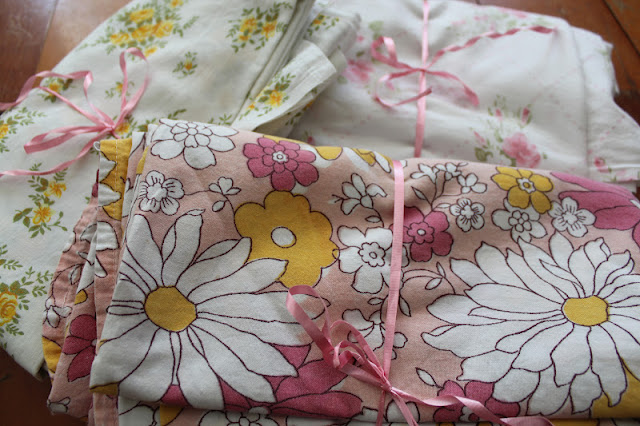 Well, it's been a while between posts over here at Betsy's and it's all because there are goings on and also not so much going on at the same time. You see we are culling and sorting and giving away and selling on ebay in every spare minute that we have over here, but photos of my boot full of bags destined for the oppie were not inspiring a blog post.

I do find that whenever I ruthlessly rifle through the kids stuff and give it away I am rewarded with op shop treasures. Hence the little trio of vintage sheets from my very local oppie that has never before produced sheets in the 2 years I have been visiting. All neatly folded and tagged and wrapped up with pink ribbon. 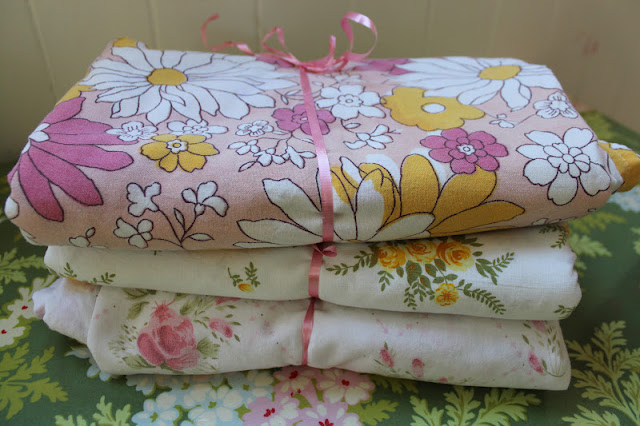 I even found the pink and yellow version of the purple and green floral that I  found months ago at the beach. 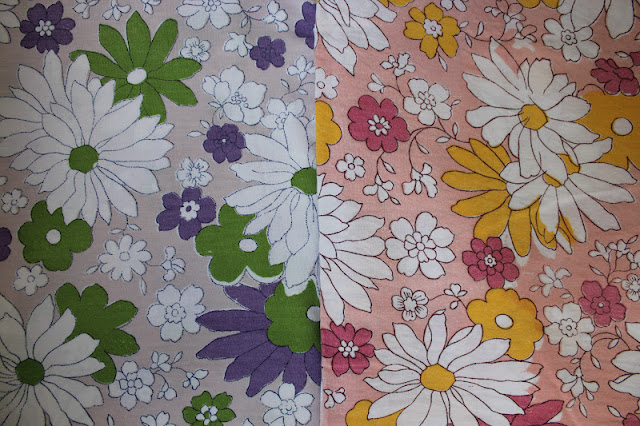 And the not much going on? Well that would be anything crafty, my overdue tax and our house plans. After taking nearly six months to actually agree on a floorplan, Legoman and I have kind of stalled on the details. Quite a few of the details in fact. The entire problem has arisen because Legoman has opinions on interior design. And is quite stubborn about it all. I am spending days fantasizing about him working on an oil rig whereby he would be away for months of the year while  sending back wads of cash for me to recklessly lavish on laundry splashbacks and undermount sinks. He would wipe his smelly, oily hands on his overalls and skype things like "Love, I'm not much into that design malarky, you just order whatever frosted glass pantry door takes your fancy".

The current list of items unable to be agreed upon is extensive and includes:

1. The freestanding stove- Eventually he will realize that I am not going to back down on this one just because he does not like the knobs

2. The kitchen bench thickness - who knew that was a whole debate topic in its own right and I am in  trouble with this one as he even has pictures stored in his ipad of the desired bench

3. The kitchen tap- I am actually prepared to give in on this one but plan to hold out to the last minute for leverage on other items

4. The entire vibe of the kitchen- he wants minimalist contemporary, I want a fusion of this plus vintage, hamptons,scandi,and farmhouse.  I plan to confound him with the sheer confusion of such a fusion and hope that he is willing to give this up for the tap that changes colour with hot and cold water.

5. The size and position of the TV- which then unfortunately has a flow on effect on the whole lounge room arrangement and window positioning. I now see that having only the tap as leverage is creating a problem

6. The laundry splashback- I can sense weakening on this front though, victory may be swift and absolute.

And you thought that Women's Olympic hurdle final was tense? That split second victory by Sally Pearson has nothing on the atmosphere over here at Betsy's.
I hadn't even included all the things that we don't agree on simply because neither of us can decide what to choose. That would include all the doors and windows, the back wall of the kitchen, storage and where the heck we are going to live when we go ahead with it all.

On a more positive note all this selling of unwanted stuff has generated $1600 towards the lovely freestanding stove that we can't agree on. And Legoman has designed the best walk in pantry a girl could ask for. And we have new building designer who uses a computer (instead of drawing everything by hand!) and the plans are due back in a week. We are hoping that having some 3D walkthrough images will solve some of these tricky decisions.

I think this was my first ranting post. Every girl needs a good rant every now and again I think.

Anyone else out there have husbands who like to meddle?
Or all you all lucky enough to have ones that say "Yes dear" while they take another call on their phone or start constructing that window seat you sketched on a serviette?