Kindness and a seaside escape 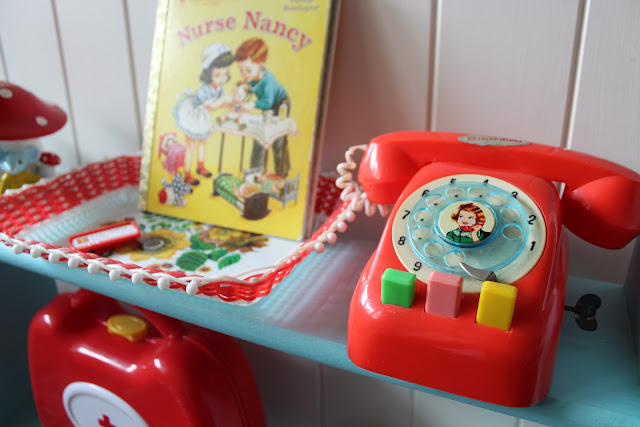 Sometimes the kindness of strangers will take your breath away. A few posts back when I shared the new Nurse Nancy shelf, I mentioned that miss Liongirl was lamenting the missing red phone. A little red phone just like this one. 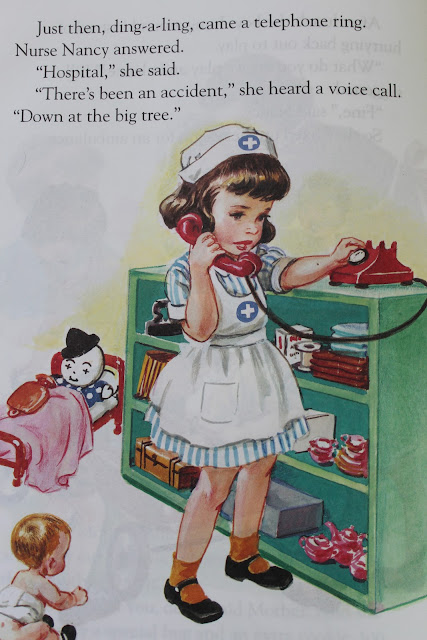 So, in the comments of that post I received a message from Maureen at Knitgirl 66 that she had a little red phone just like the one in the picture that she wanted to pass onto Liongirl. It had been hers as a child and she wanted to pass it on to a little girl who would enjoy it as much as she had. Liongirl was so excited, she was checking the letterbox four times a day, even on the weekend. When it arrived, we could not have imagined anything as lovely. It has a wind up key, then when you press the buttons it rings until it has unwound. 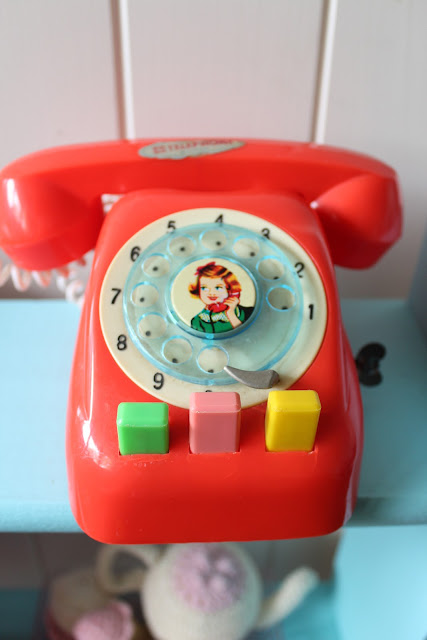 There have been lots of turns of answering with "Hospital" followed by various emergencies and ambulance requests. It will be thoroughly loved and enjoyed over here at Betsy's and I am still a little overwhelmed by the  kindness of this  gesture from someone I have never met. 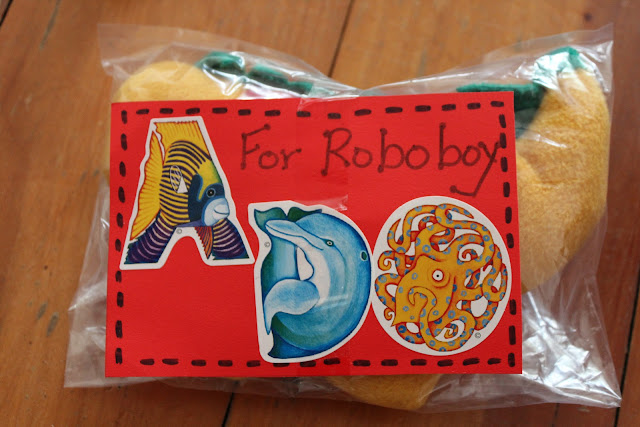 She even packed a little gift for Roboboy as well, carefully labelled so not to be snaffled up by the little sister. Maureen, you might like to know that the little lizard had a washer and toothbrush packed with him in a travel case and was taken away on holidays with us the day he arrived.

So once the phone was popped in its proper place on the top of the Nurse Nancy shelf, we were out the door and off on a little mini adventure. We had not been away these  holidays at all and when Legoman was sent away for work for a week, I decided to round up my mum and run off with the kids to the seaside for a few days.

While we had some ordinary (rainy and cool) weather we still managed to enjoy ourselves. We trotted off to Redcliffe which is only about 40 minutes away. 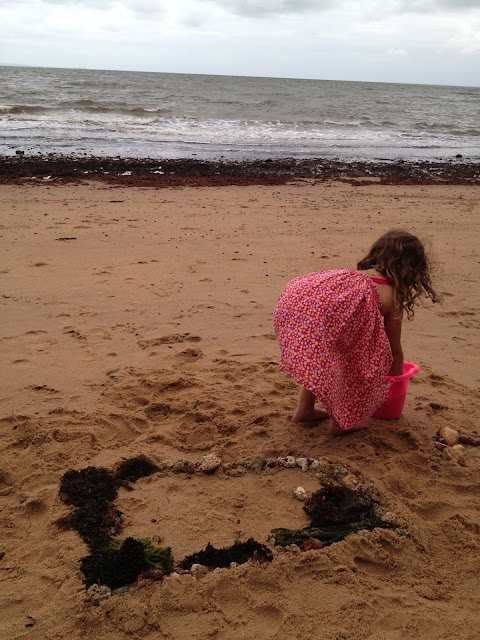 The beaches are not great for swimming but the flotsam and jetsam was absolutely the best. Never have we collected so much sea glass in such a small area, enough for a whole stretch of crazy paving in the mermaid garden the kids wanted to make. And the blue blubber jellyfish washed up on the beach were prized collectables too. We only picked up the ones without tentacles, even though they not really dangerous, there is a risk of an itchy contact rash. We had no problems, except that once Roboboy starts collecting he has to sweep the entire beach. 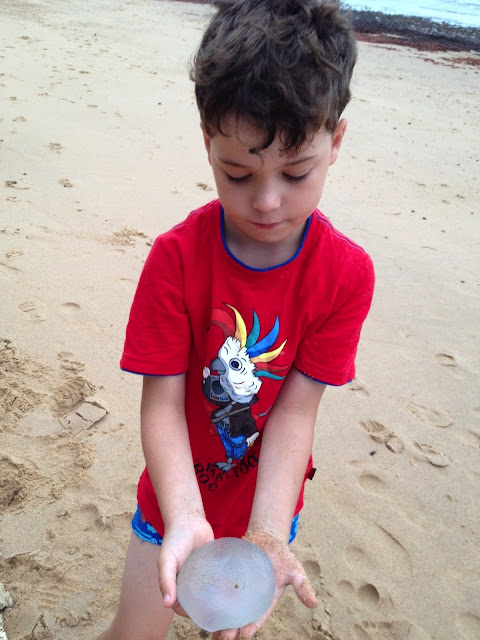 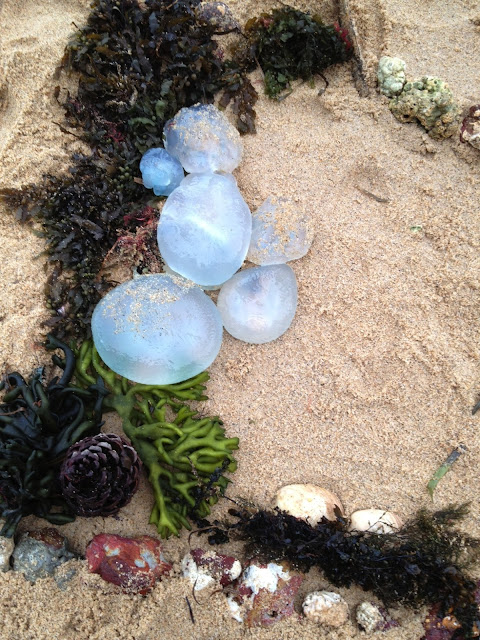 There was also an enormous assortment of seaweeds, shells, corals as well as the usual bits of bright coloured plastic we always end up collecting. See, that little yellow plastic lid is a frypan on the stove, behind that was the shower and in the entry are all those bits of sea glass in crazy paving style. What fun we had traipsing up and down the beach loading up our buckets with all these treasures before coming back to a shady spot to assemble it all. 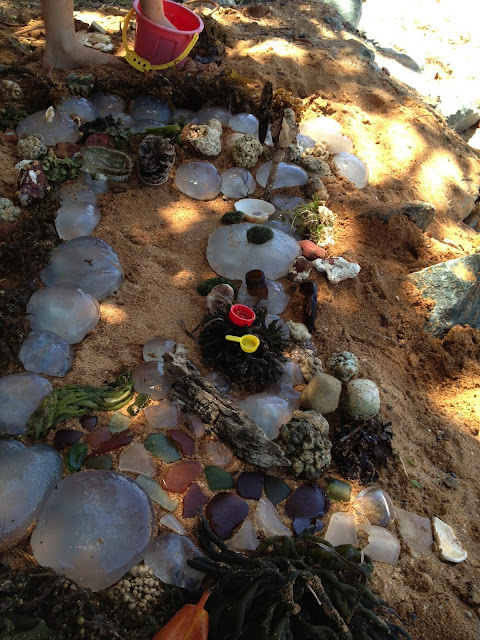 Now as all those jellies were a deterrent to ocean swimming, luckily  Settlement Cove Lagoon is just  a quick scooter ride away. (This pic is from the official Redcliffe site here). 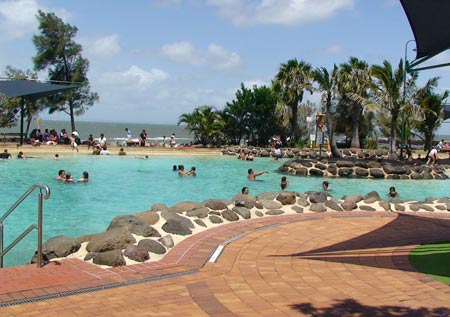 A huge public swimming pool, complete with an island much to Roboboy's delight, all right on the foreshore but with no risk of jellyfish stings. 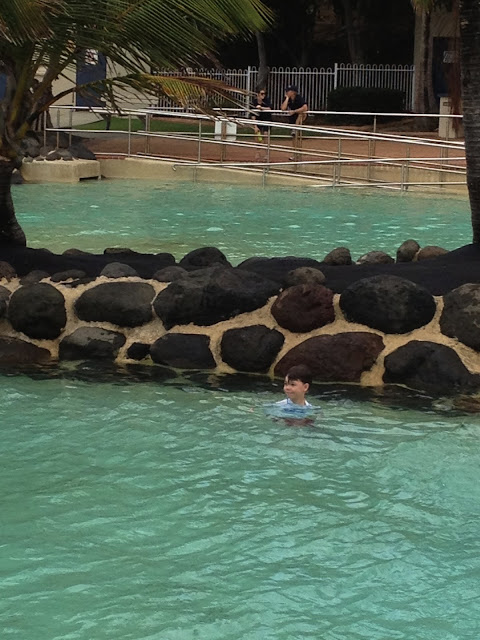 And conveniently close to a large serve of calamari and chips. 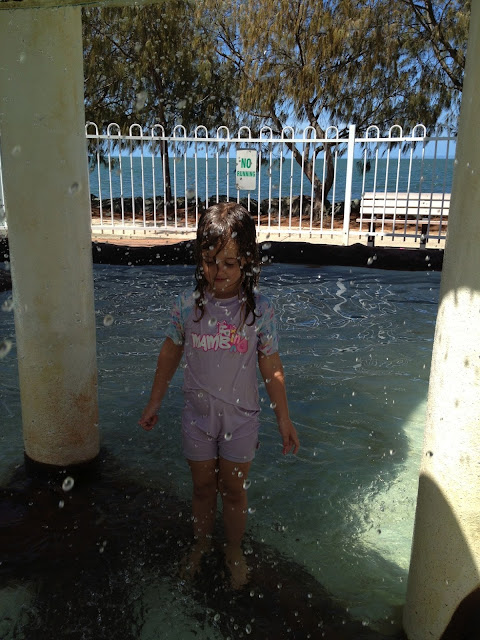 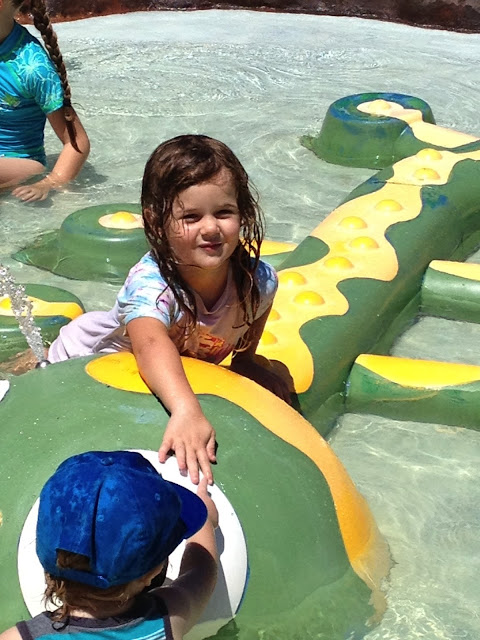 With both the kids on scooters were were able to explore a large area of the foreshore. Finding some red cliffs for Roboboy to scale (now he gets why it's called Redcliffe), 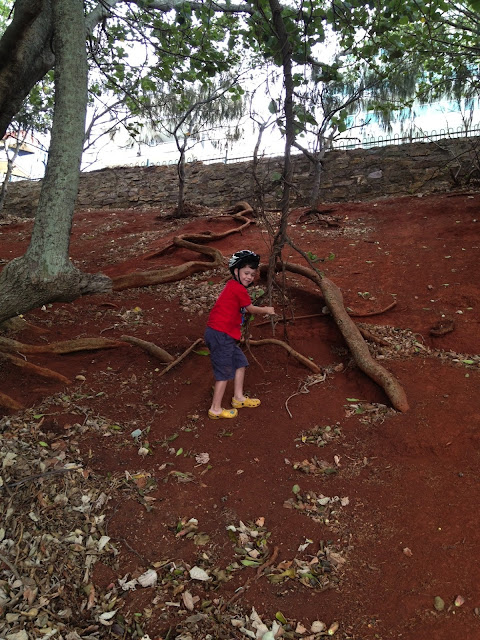 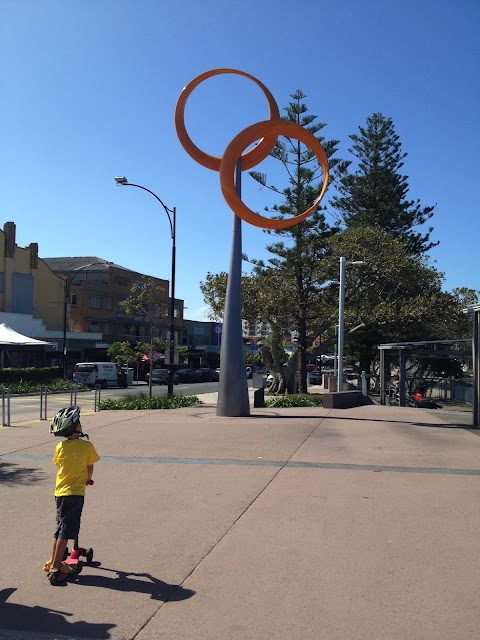 and upstairs art galleries with scenic vistas from their windows. 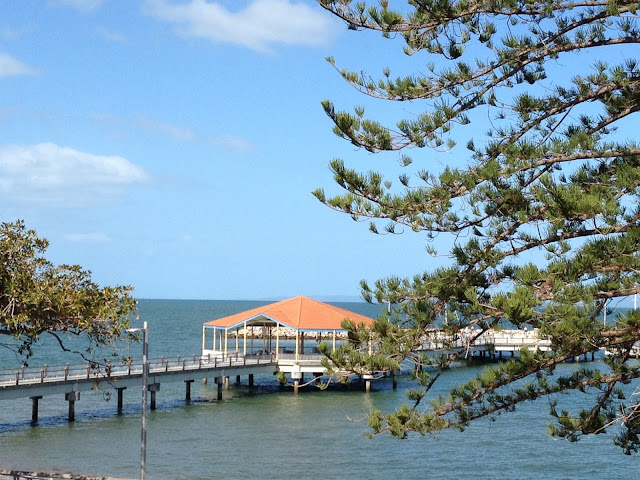 I was even able to peruse some op shops while mum stayed with the kids but the pickings were very lean, probably a good thing with all this decluttering. I did find this amazing turret  house though, (I have a thing for houses with turret rooms). 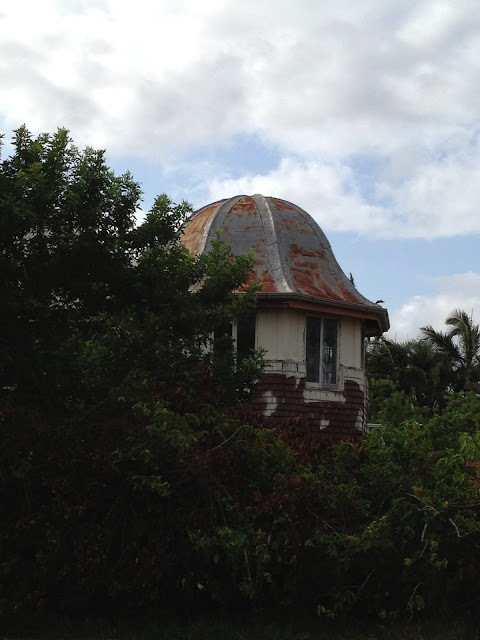 It was part of a massive rambling old house overlooking the water at Scarborough. The house had been turned into flats but was spectacular. I snuck into the front garden to take this one. The was only about one third of the frontage, it was incredible. 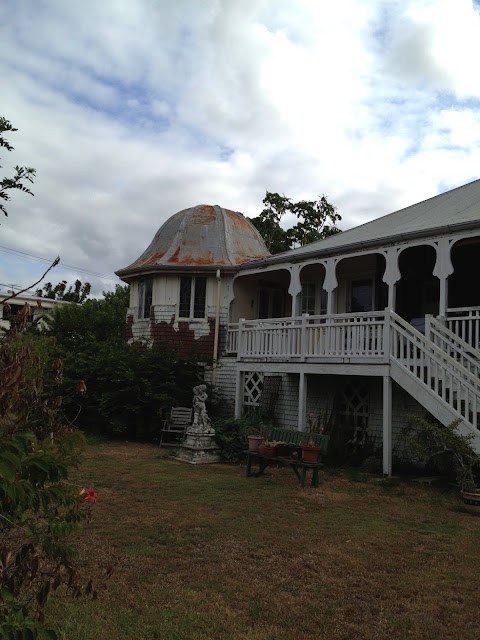 So, now we are arranging our massive sea glass collection and checking off all those last minute back to school  jobs we have to get done. While I think of it, can anyone tell me how I can add the reply function onto my comments? After receiving so many lovely comments and some that made me giggle (I can never think of iced vovo's the same again after comments on my last post) I would love to be able   to let you all know that I do not intentionally match my sandals to my bike, and I love all the bits and pieces you share about your own lives, so if I could reply to individual comments that would be the bees knees.
Posted by Bungalowgirl at 11:34 PM