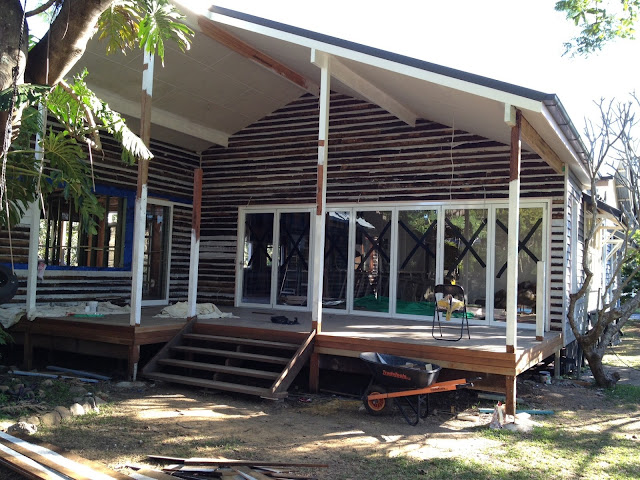 So this week has mainly involved the addition of lots and lots and lots of external weatherboards. Betsy, for the time being, appears to be unaware that horizontal stripes are not always flattering for a girl's figure. So, perhaps we can just keep that to ourselves until she gets a coat of paint. The other discovery for the week was some significant sagging in the old girl's, ahem, undercarriage.

We always knew the floors were wonky as any games involving marbles ended up with them all rolling in one direction towards the bathroom. Well it turns out the slope was significant enough to cause problems with our new kitchen and so Betsy underwent a day of stump levelling to the tune of about $1000. Yes, that's right. While I certainly can't afford them, it appears that Betsy has traded her sensible flats for some Manolo Blahniks. 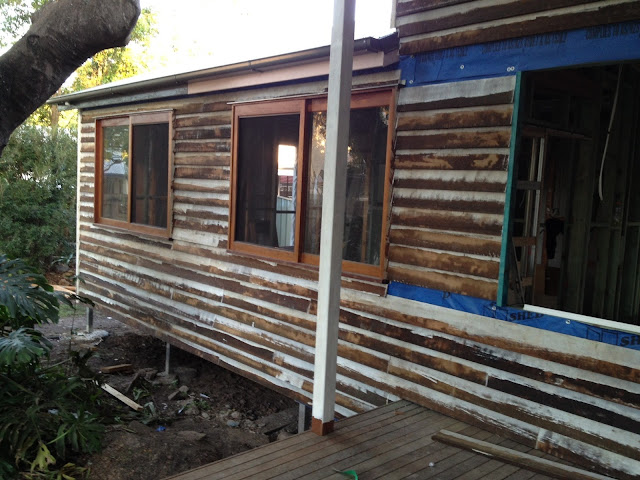 Now, back to the planned renovation and not the (somewhat) unexpected bits costing extra money. The laundry wall has been finished too. 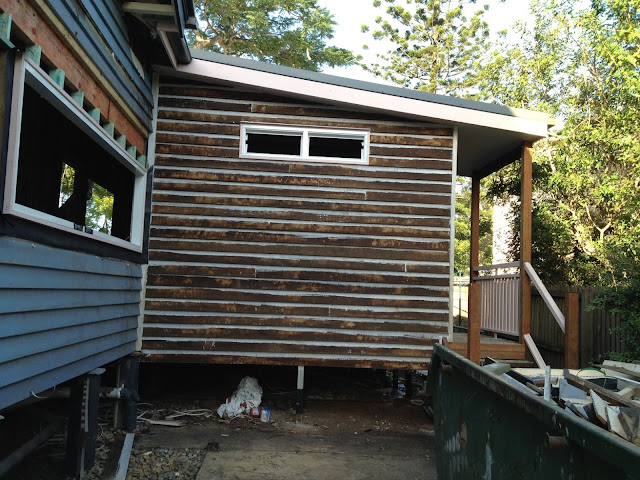 The kitchen window is in. 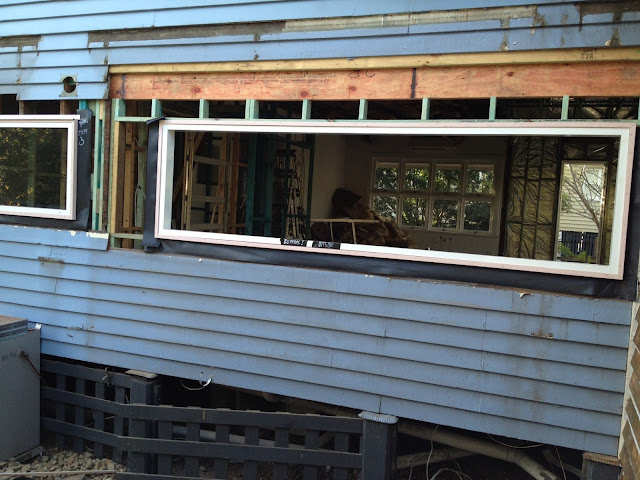 The external slider  from the family room to the deck has also been installed. This door appears to have caused drama with both design and installation but now that it is in will work well in a tricky corner and slides beautifully. 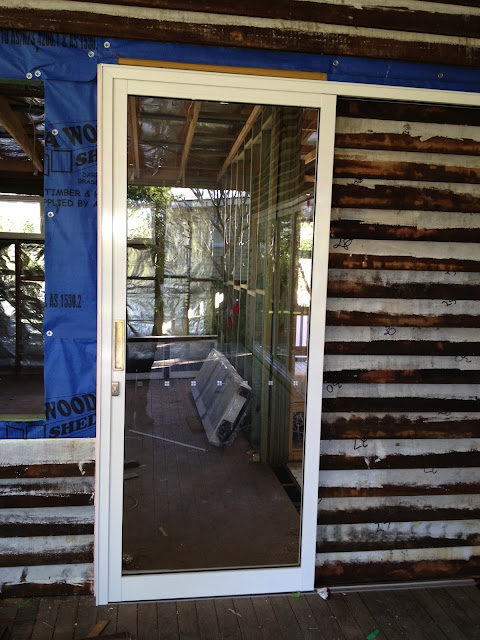 Like the bifold doors it is 2400 high and with a similar profile. This corner is where our BBQ will live so we did not want a door that folded back onto this area. Now we are just waiting on the family room window and the back door to arrive and Betsy will be at  lock up stage. 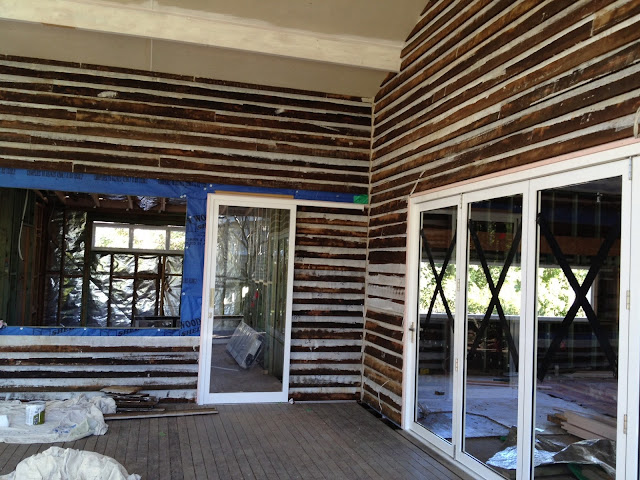 Meanwhile, the electricians spent two days this week inside stringing electrical cable. Not really much to photograph but I can assure you many hours were spent prior to their visit nutting out the details of the electrical and lighting plan. There was also some progress with the framing up in the kitchen and we had the final onsite kitchen  check measure and now work will commence on all the kitchen cabinetry. 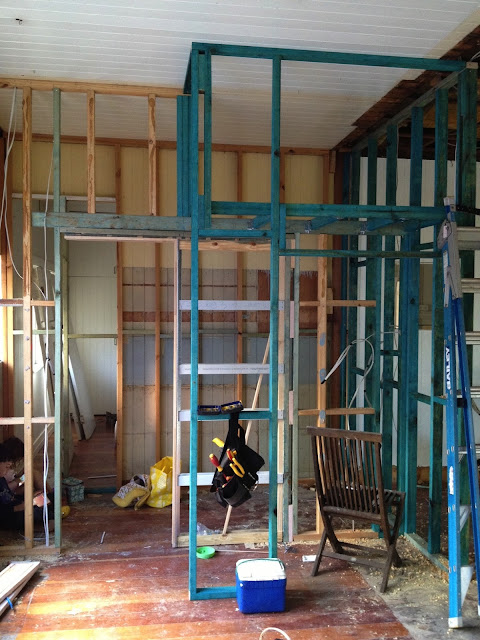 All the new blue posts are framing up where the fridge will go. To the left of the fridge space is a small section of wall concealing a space for the microwave and some shelving. Here are my kitchen plans if this is making no sense.  We were not keen on overhead cupboards and instead the large blue framed cavity that goes up to the ceiling will be accessible from inside the pantry and will be used to store eskies and picnic hampers. 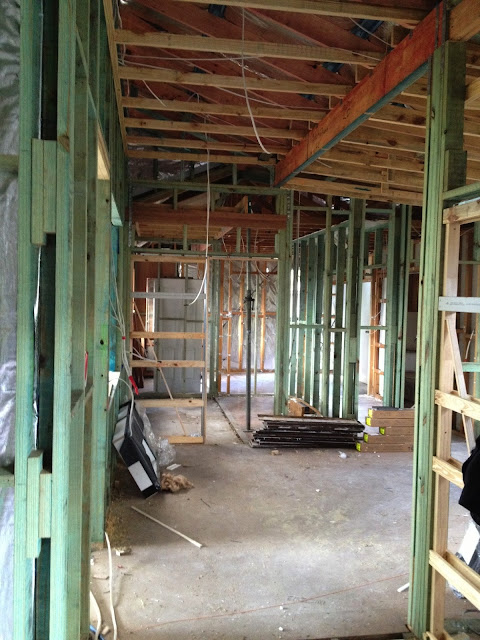 In the opposite direction we have new ceiling beams up in the family room. This room was intended to have a flat ceiling at 2.6m  high. The original part of the house has 3 m ceilings and the granny flat was 2.6 m so we always new there would be a dropped section somewhere where they joined. Our builder suggested we keep the left side of this space at 3 m (where we had the height do so) and then consider a  raked ceiling to the right of the beam. I'm not a massive fan of a raked (angled) ceiling but think in this space it might just work so we will go ahead. The slider into my sewing room has also been reversed now as well.

So, I think as soon as the remaining door and windows are in we will have some wall linings going up next week which will be a huge change visually. Meanwhile, we are off to paint some weatherboards and hopefully choose the exterior colour.

Posted by Bungalowgirl at 9:20 AM