It's the most wonderful day of the year 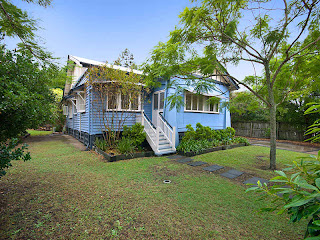 The day has arrived for the Little Blue Bungalow to make her debut as the star of her own blog. Me, well I'm just along for the ride really. Let me tell you the delightful story of how we became friends.
We found her, in all her blueness, in May 2010 and had no idea that she was what we were looking for. We were organized, we had  a list of requirements for our next house and California bungalow was not one of them and neither was powder blue.
She did however, despite her shocking blue frock, contain everything else on the list. This was an extensive list and as she and I became acquainted  I was ticking off the requirements in my head.

1. large preferably flat block of land
2. lots of established trees
3. at least 3 bedrooms
4. wide central hallway and large rooms
5. vj interior and high ceilings
6. liveable
7. in one of only 4 suburbs close to where we currently lived

She had all of these neatly packaged as a low set California Bungalow instead of the high set Queenslander with wrap around verandahs that I thought we wanted. She also in her favour, had beautiful ornate plaster ceilings, a long flat kid friendly driveway, and she was around the corner from our old house which would allow us to stay in the suburb we loved.
And best of all she had great bones but was looking quite tired, dull and in great need of someone to admire her and make her glow again. And someone who could see past the shocking blue frock which she had  been thoughtlessly dressed in over a decade ago.
So, after three long months of waiting and driving past every day to check that she really was ours, she welcomed us to join her in August last year. And we don't miss our old house at all. Well, maybe just the kitchen, but I don't want to hurt her feelings so lets just keep that between us shall we.

Over the last five months she and I have been contemplating a blog to share our plans to bring out the best in each other. She is more than happy to support me with my three 2011 resolutions of  creativity, gratitude and organization. At this point she feels I also have to confess they are actually all 2010 resolutions that still require extensive committment so we are hanging onto them for another year and now we are a team it should make it alot easier.
She in return is quite excited about a makeover as frankly the powder blue frock is not her at all. Having got to know her a little over the last few months I agree it is really not her best colour and there has been a recent flurry of activity looking at colour swatches together. She is also very keen to change her name at the same time as the frock as she feels quite misunderstood. We have not yet discovered her real name but she is currently best known as Betsy. And we all know that a Betsy in a blue frock would be at best brash, slightly stocky with sensible shoes and flesh coloured tights and probably working in a diner.
So if you love queenslander houses with a story, california bungalows , renovations and makeovers, creative endeavours and all things garden related then come along for a stroll with us anytime.
Posted by Bungalowgirl at 11:33 PM