Time for some hard work

Well finally there were no excuses anymore, it was time for some hard work. No rain  - check, no compulsory days of celebration and festivities- check. No new natural disasters - check.

We have had the small issue of about 40 square metres of overgrown garden bed that we decided should be dug out to increase the usable space of our yard. We have been trying to get to it for 6 months but some other issue has always come up- mainly the almost constant rain and resultant mud.

We have also had the added stress of my mother ( who is known for spontaneous rants on all sorts of topics) proclaiming that the feng shui of all that dirt in the north east corner was a big problem ( can't remember what kind of problem) and that it must be dug out before mid February or we would have to leave it there until next year....... WHAT THE?

So we decided it would be much easier to just remove all the dirt rather than debate the details of this statement any further. This is what we were dealing with 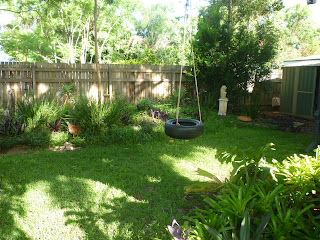 Behind the tyre swing is a prairie of weeds interspersed with a few scrappy Deites, Rhoeos and a solitary Yucca atop about 20 cm of elevated dirt bordered by broken pieces of concrete. We need to level it out to fit our trampoline which has been currently living on top of the sandpit rendering it completely inaccessible.

So we got into it early and the girls were right by our sides helping, well maybe less helping more general involvement . I have come to the conclusion that chickens either have no peripheral vision or very small brains as  a mattock swinging millimetres from their heads does not deter them at all. Several times I was close to decapitating them both and or turning them into uni toed chickens.

See how close the mattock tip is to Dora's head and all she is thinking is "where's the wormy, I know if I just scratch and peck a little more.....ooooh beetles, there would have to be beetles...." By the way I do actually have a head and face under that hair, just happened to have pigtails today which has rendered me a very fluffy cousin IT. 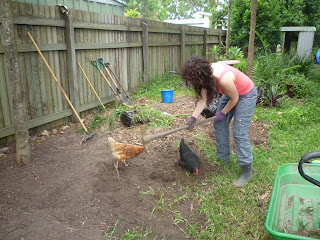 Well it was a veritable feast in there- worms galore, beetles and a lizard that both girls fought over like the last handbag at a Myer Stocktake sale- they got half each in the end! I did have to keep pausing to ensure no accidental decapitations and I got the distinct feeling that the girls thought Legoman and I were just out there working to procure them lunch and there was no higher agenda than that. 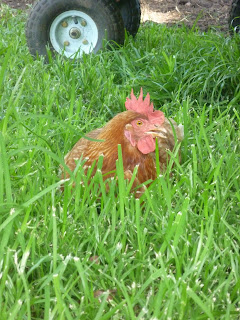 Dora ate so much she them promptly collapsed on the lawn for a lie down. Sooty, if she had those same urges simply chose to eat through it.﻿ 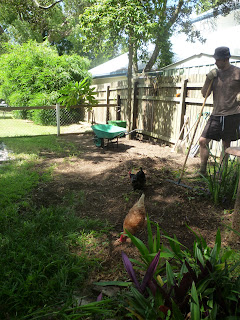 Finally late afternoon it was down tools and over to the neighbours for a swim. We had levelled about 1/3 and almost made enough room to move the trampoline. Now all I need to do is not focus on exactly what the girls ate today and how it will end up in their eggs tomorrow.
Posted by Bungalowgirl at 9:53 PM