Too school for cool 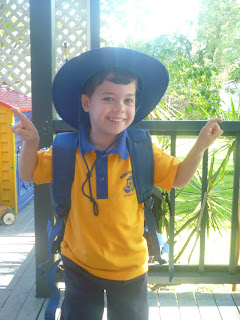 Well it was with much excitement and a little trepidation that Betsy and I said farewell to our Roboboy who was off to his first day of school. This is him singing himself along to that line from I think a Pink song about being " too school for cool"- hence the funky arm movements.

As far as first day at school attitude, he was awesome- was right at home in about 2 minutes and answering every question the teacher asked. I was impressed that he quickly picked up the bit about putting your hand up first but suspect he then spent the morning saying " Pick me, pick me...."

Roboboy refers to himself as a robot- often pausing to turn up or down invisible dials on his tummy that control things like power, boosters and volume- we wish we had a remote for that one. His paediatrician describes him as "Quirky" and I could probably run with that if I only saw him for 3 hours a year and wasn't directly responsible for anything he did.

On the flipside he is the only 4 year old I have met who can find a way to use "gravity" and "momentum" in everyday conversation. We love our Roboboy and hope he loves school. 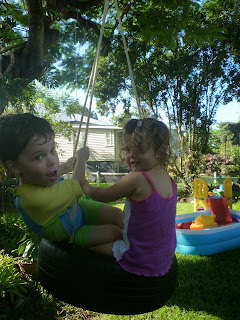 Ever wanted one of these ? I have for ever. The kids got one for Christmas, Besty provided the huge poinciana tree and Legoman braved the 20 foot ladder to hang it up. The swinging arc is massive and it can safely swing three kids at once. No better way to come home and relax after your first day at school and Liongirl loves it too.

Why Liongirl? Well she is fearless, has a curly mane and one of her 2 year old mates mispronounced her name with a lion on the end instead of a line and it's kind of stuck.

The best part of today was making a new friend at school, not Roboboy, ME! Nothing like a complete stranger with a child the same age, a cup of tea and a sharing of minds. Sometimes friends arise completely out of the blue in the most unexpected way. Makes a sunny day even sunnier.
Posted by Bungalowgirl at 9:53 PM