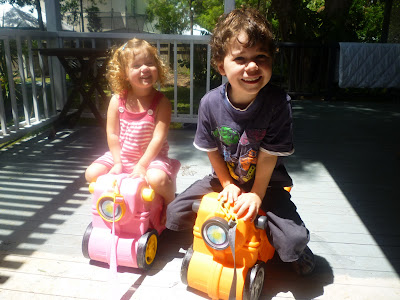 Just in case either of them ever doubt that they are related we have photographic proof that suggests otherwise. These extra cheesy smiles are the result of a shopping expedition with Feng Shui Nonna this morning. Ever thought while travelling how great it would be to have a ride on suitcase? With a strap so that if you get tired others will just pull you along? Roboboy was hyperventilating at the sight of his Octonauts orange case and I think Liongirl's 6th word was pink  so excitement all round. Apparently they both rode them through Target and all the way to the checkout where they rang up at a very impressive $16.

Despite the fact that we are not travelling to Grandad's farm until April, Roboboy was straight off to neatly fold and store all his undies. Adamant that this will not cause him any problems getting ready for school tomorrow. 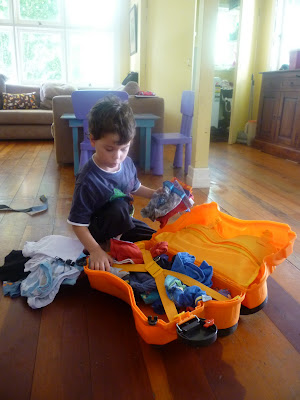 ﻿While they were out purchasing travel accessories I was frantically try clean up my house for the impending 5th birthday party next weekend. Had a little moment the other day when I arrived home from school drop off  to discover that Legoman had waltzed off to work leaving the back door completely open.
Stopped in the doorway to survey the carnage of a break in and thieves having flung items willy nilly around the living room. On closer inspection I realized that the thieves had in fact left the laptops and big screen telly and focused their efforts on strewing duplo across the floor amidst a rash of rice grains and corn kernels under the dining table,  a trail of clean washing leading to the ottoman and little molehills of dirty washing popping up all over the room.
It was with slight horror and disgust it dawned on me that no we had not been burgled, we were just living in a tip.  My brain immediately jumped ahead to the personal mortification involved as I explained to the young police officer that all that what appeared to be the result of a robbery was actually a typical day for Betsy lately.
So, it was straight to the craft table/creation station. Forgot to take  a before shot but believe me when I say it could have been entered  straight into the  crime scene evidence log. I find that when things get overwhelmingly messy the kids just won't go near them and the minute they are sorted and organized they are back in there creating away. 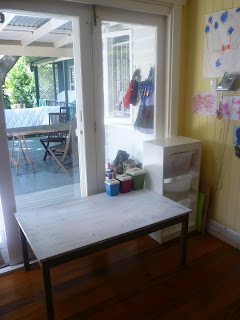 Bliss. All feltpens checked for ink flow. All spare lids/chunks of dried out playdoh/dried out pens/dessicated glue sticks binned. All essential items assorted into containers. Jam smeared  on window possibly spelling ﻿the words " my brother is so mean" windexed into oblivion. And within minutes of arriving home....... 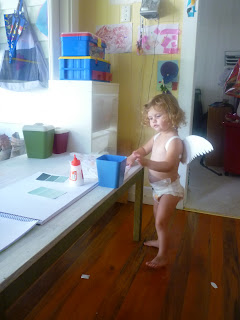 Yes angel wings are essential when gluing  paint selection charts into one's scrapbook. I bought this coffee table on ebay for  $20 and do have plans for it that vacillate between repainting and recovering in a funky vinyl. And would you believe at the end of all this everything was put away in it's spot. Now just another 6 rooms to go.......

Posted by Bungalowgirl at 9:58 PM