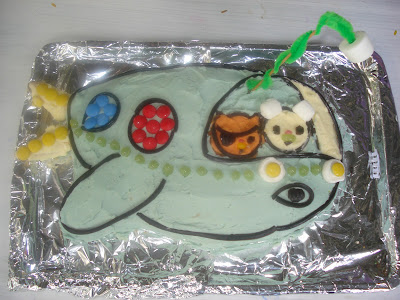 Sound the Octo- alert, one GUP A coming into dock at the Octopod, piloted by  Captain Barnacles and his trusty Navigator Kwasi. Yeah, ok I might have watched  couple of shows in order to design the cake. There was also a full set of all the characters faces as cupcakes and each child got to choose one for their goody bag. 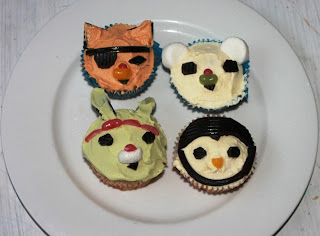 One little boy was so overwhelmed by choice he deliberated for about 3 full minutes. I had to check if he wasn't just being too polite to say" bugger off lady I don't want any of them" but no, it was just a REALLY hard choice. It was lovely to see the excitement generated by this bunch of 5 year old boys who are all so into the same show and in awe of their favourite characters coming to life in cake form.

Overall I have to say that the party was a huge success. We had taken a risk and invited 4 of his new prep friends as well as 2 old friends. And we decided to be accomodating and invite all the younger siblings as well because we knew that in all likelihood one or both parents would be coming as well. So that meant 7 five year old boys, 8 toddlers aged from 1-3 and 14 parents. And these were parents that mostly we only have briefly met at school drop off and pick up, slightly daunting for someone with a pathologically messy house. But we had already decided to do something to make our lives easier, because remember Roboboy is Quirky.

At school he tries really hard and mostly comes off as good Quirky - think Johnny Depp- slightly eccentric in a cool, married to a french model kind of way. At home, all that effort to appear normal has completely worn him out and we get a lot more bad quirky - picture any movie with an exorcism and you've got the gist. And as much as he loves the idea of a birthday party, when he's in the middle of one he pretty much doesn't know what to do with himself. At best he could  hide in his room and demand us to send everyone home, at worst he would be chanelling Charlie Sheen ie losing the plot and ranting in a delusional and narcissistic fashion. So, we bit the bullet and ordered one of these: 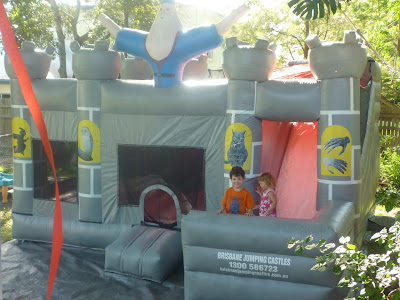 My goodness what an absolute winner. Room inside for up to 12 kids at a time with a ladder ramp that goes up to a  slide down (just to the right of the kids) The party went from 2-6 pm. And do you know what? Even when it started bucketing down rain at 4pm that castle just got better and better. Because then it turns into a bubbling spa with WATERSLIDE. We did not see any children until they all crept inside drenched at 5.30 pm to eat snags in bread and collapse in front of a few Octonauts  re-runs on the telly.

And all the parents got to kick back on the deck, eat copious nibblies, have a few beers and meet some new friends. Not to mention, going straight home with knackered well fed children who would collapse straight into bed. And although Roboboy did make his friends line up in an orderly fashion to look at his new lego set and completely freaked out when a gang of toddlers got into his room and hijacked his fleet of garbage trucks, mostly he and was just like any other 5 year old boy having a great time with some new friends. And for that we are eternally grateful.
Posted by Bungalowgirl at 8:59 PM