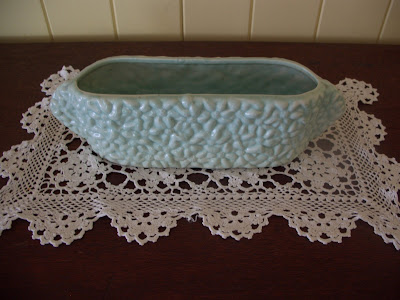 Legoman and I had a rare treat today. Feng shui Nonna looked after both the kids so we could have a few hours to ourselves. We had intended to sort out our office but instead ( procrastinators that we are) we snuck off for a prowl around the Woolloongabba Antique Centre or WAC as it is more affectionately known.

Many years ago we would spend many a weekend wandering through the Paddington Antique Centre and the WAC is the same concept on a much bigger jam packed scale. It is one of those places that if you were accidentally locked in for the night the fun would begin. You could try on all those scrumptious frou frou vintage dresses/hats/gloves, kick back in the rows of cinema seats with an old Enid Blyton and just take your time examining the myriad of deliciousness all around.

We had gone back to longingly look at a huge silky oak table that we had seen months ago and was now on sale. Unfortunately it was still way too expensive for us but thankfully was probably also just a bit too big to comfortably fit back with Betsy. I did manage to find this lovely vase (Legoman would debate that descriptor as it is not exactly his cup of tea) but he humoured me as a man does who is trying to convince his wife that he should be able to waste his bonus on personalised plates. I really just love the colour and the flowery texture and knew I had just the spot for it. 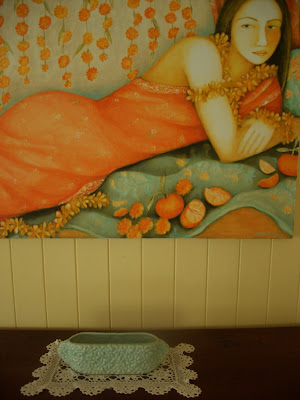 Being the purists of the colour blue that Betsy and I are, we feel that it is probably a light Cyan colour but we are open to correction from higher authorities. It is a "Diana" vase made in Australia. As I am completely clueness about branding of items this meant nothing to me. A quick curiosity search on ebay revealed an entire series of similar vases and a replica of mine was titled "PosyPansy vase". Further down the list similar vases in other colours were titled "Trough vases". Strangely the image of snorting piglets was not as appealing as petite bunches of flowers. It was also nice to see that the price I had paid was modestly better than ebay.

I took a peek at Sandy's area from Paint me white . Her section looks beautiful and her prices are really reasonable. She has several beautiful fabric covered stools that have motivated me to dig out mine and make it over. We also snuck over to Add Vintage  across the road as well. While most Mid Century furniture is not quite Betsy's style it is nice to admire the architectural element to all those buffets,credenzas and crockery. I have to say after sitting in  a Casala chair they score high marks for comfort,stackability and all round good looks. I could imagine a set of those on Betsy's back deck, perhaps when we have a roof to protect them.

After such a lovely morning, we were pleasantly surprised to be able to inspect another silky oak dining table that we had found on ebay. This one was much more within our budget and came home with us this afternoon. As I have been looking for one just like this for about 3 years, I am more than a little excited about it all. Now just to find some chairs that do the gorgeous honey coloured timber justice...... will share some photos tomorrow.
Posted by Bungalowgirl at 10:07 PM