No table, how about a buffet 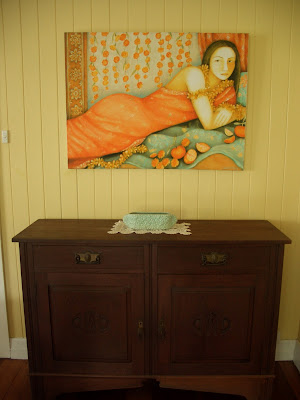 Unable to do justice to my new table due to old non complimentary chairs, I thought I would share another piece of silky oak gloriousness with you all. If you were  getting the idea that there is a  bit of a silky oak thing going on over here at Betsy's  you would be on the right track. It all started with a dresser bought unrestored 11 years ago just after we bought our old house. Since then we have intermittently added to the collection along the way, replacing other wooden furniture as we find the right silky oak pieces.

This buffet was an ebay find about 6 months ago and has been languishing in the office awaiting restoration. With the arrival of the dining table it has been pulled out of hiding in order to best display the new posy pansy vase. I love the art nouveau style carvings on the door. I don't like a lot of fuss and bother with wooden furniture, no glossy mahogany or elaborate carvings and frills and furbelows for me thankyou very much. But a little art nouveau detailing is quite delicious.

It took about 4 years of waiting for a simple mirror free buffet with some detailing to appear on ebay but as mentioned previously, once I have a vision I am tenacious. This one was living in a decrepit old house with a big sister buffet much larger and more elaborate in size as well as a dining setting and several smaller pieces all in silky oak. They had been in the same family for at least 90 years but none of the children wanted the dark silky oak furniture for their contemporary homes.

For those who don't know silky oak, it is usually a rich dark amber honey colour with a very fine lacelike grain running through it and no visible knots. It comes from the largest tree in the Grevillea family and the wood is also known as lacewood due to the distinctive grain. Not to be confused with Tasmanian oak which is much lighter and with a larger grain and commonly used to build more contemporary furniture. It is also quite lovely but to me is the poorer cousin in colour and richness.
Eventually we will restore this one, her interior has had a very slap dash white makeover and a new coat of shellac would bring out her lustre but right now I think she and the posypansy vase are already bringing out the best in each other.

Several people posted comments about the painting so I thought it was time for a mini art tutorial. 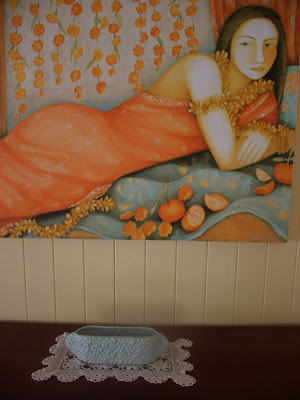 We call her "The Beautiful Lady"  but the official title was "Indian wedding" and she is by an Australian artist named Genola de Jong. She does beautiful paintings of women as well as lovely still life paintings involving interesting flowers and fruits. Have a peek here if you want to see some more of her work. She doesn't seem to have any recent work but she was quite prolific back  nearly a decade.

Her style to me is a little reminiscent of the famous impressionist Paul Gauguin during his Tahiti phase. To see a lovely tribute to this phase of his work have a look here (image is from same source). 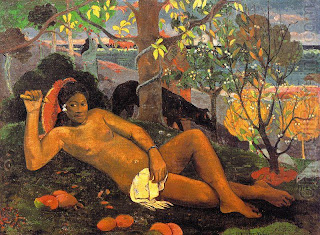 For art to enter our house Legoman and I have to agree completely that we both love it. We actually celebrate our wedding anniversary by buying a piece of art and have something from every year we have been married. The premise being that while we enjoy the art  we also hope to ward off the perils of divorce by both being unwilling to divide the art collection.  We don't buy for the artists name or brand or hype or investment potential, we very simply buy things that we love, and usually it is all about the colour for me.

Most have been inexpensive, two have required considerable thought (it helps to average them out over the 50 years of anticipated marriage) and last years came from an op shop as the purchase of Betsy did not leave much left in the kitty.  The Beautiful lady was slightly more his favourite than mine (I think I was not entirely sure about the orange) but I love the cyan blue and all the detail in the fruits and flowers and fabric.

The other unexpected bonus is that both my children as infants would point to that gorgeous Tahitian princess and say " Mama" . Personally, given that I have curly hair, never wear orange and neither child has ever witnessed me in any sort of reclining  position let alone draped in flowers and  fruits, I think it's a bit of a stretch. Perhaps, it's just the curved expanse of child bearing hips. Either way, she is here to stay.
Posted by Bungalowgirl at 9:05 PM