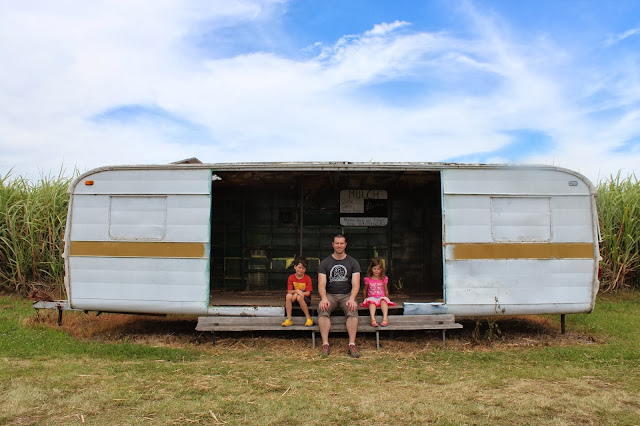 If there is a long gap between posts and a complete lack of Christmas around this blog it is because just before Christmas we went on a little wander, to a lovely beachside town called Wooli. About four hours south of Brisbane, it is further than we would usually go to find the beach, but I can say it was completely worth that late night drive where we got lost because I fell asleep at a critical point in the navigation.

The town itself is tiny and built on a thin strip of land between the ocean and the river.  The scenery was spectacular. 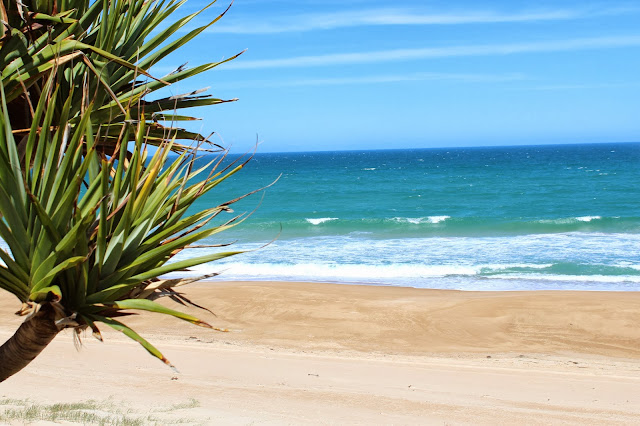 We spent most of our time on the river side. 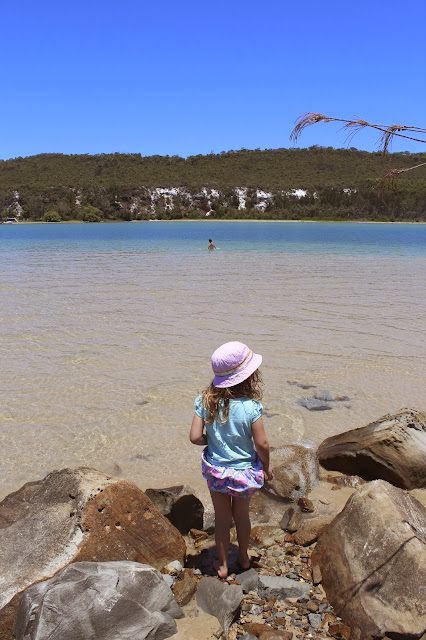 When the tide went out the sand felt like squishy marshmallow. 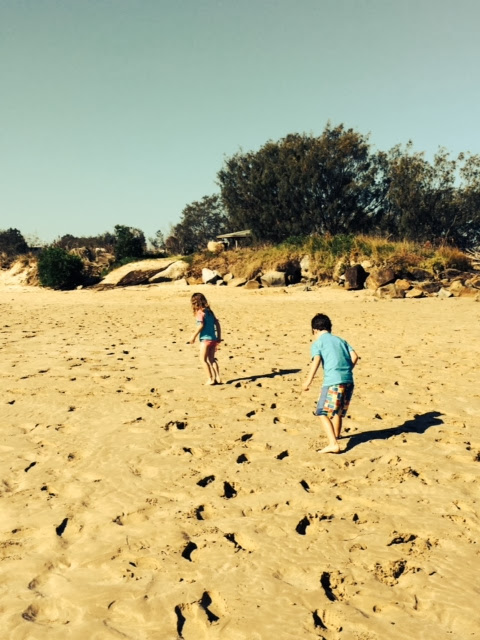 And there were masses of huge hermit crabs to collect and build a hotel for of course. This is what they look like when they are mostly inside the shell. 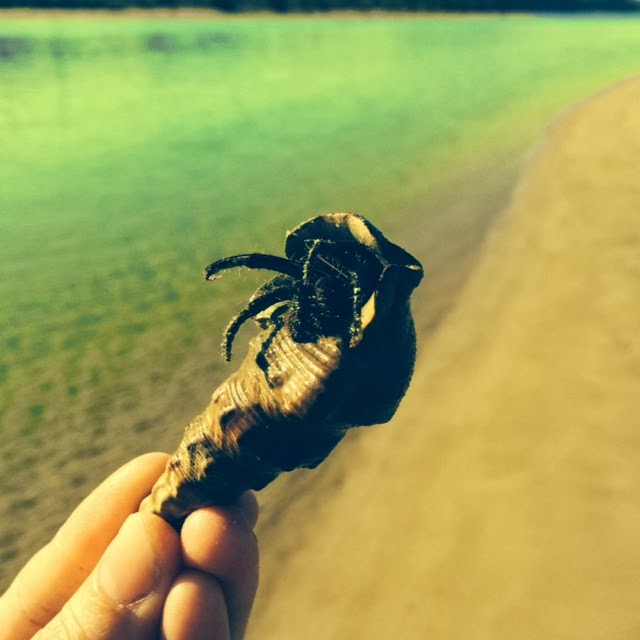 And mostly out of the shell. Yikes, that was not me holding by the way. 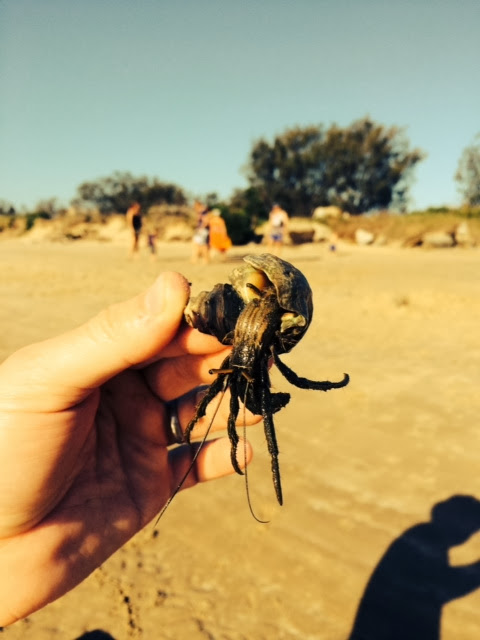 We spent hours and hours in the golden late afternoon sun just fossicking around. The kids were in heaven. The rest of the time we were in here. 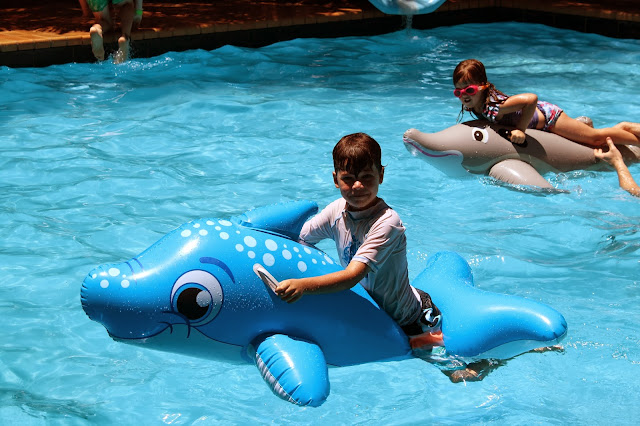 Doing crazy things like riding the dolphins down the waterslide. 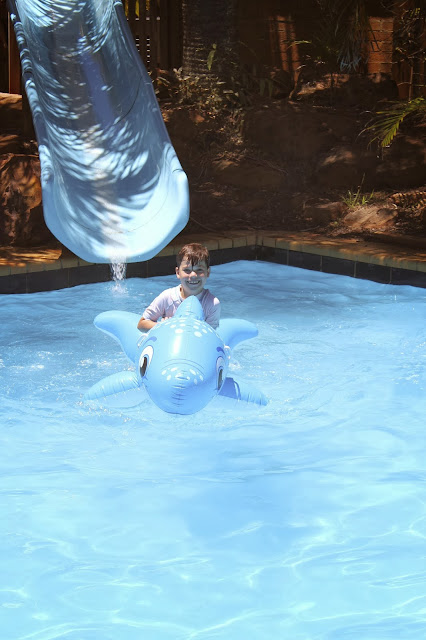 We attempted mini golf but the competition and scorekeeping was way too much for one of us. 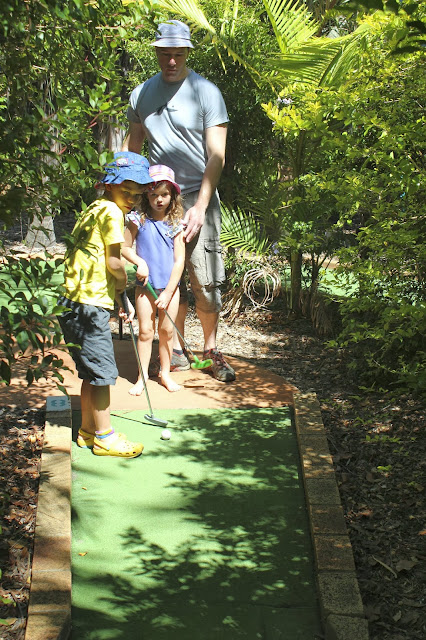 So we stuck with riding our bikes around and around the caravan park. And on the last day, the kids even went around the loop by themselves. 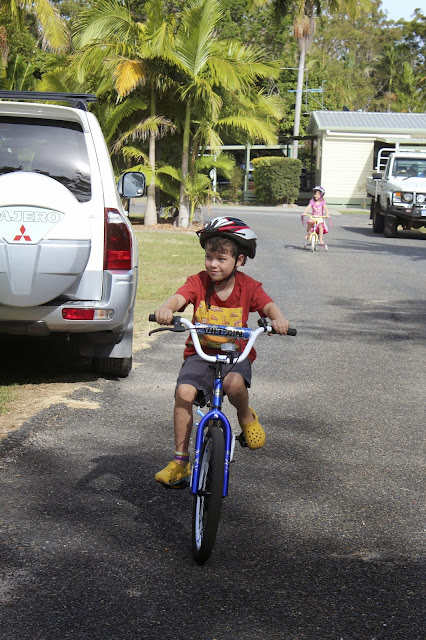 And then there were all the fibro shacks. One lunchtime, I strolled the tiny streets that make up this tiny town and sampled and hour of Wooli time. It was hot, still and barely a soul was stirring. 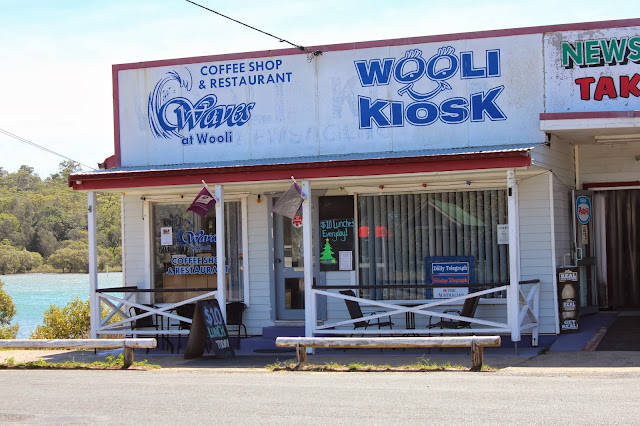 With one shop, a fish co-op and a tiny caravan park wedged between the two main streets, this is a small sleepy town. Most of the houses are fibro shacks and virtually all these shacks are either beach front or riverfront. It was basically fibro shack nirvana. They came in every colour imaginable. There was even purple but I couldn't get a pic due to a big ugly 4WD parked in the way. 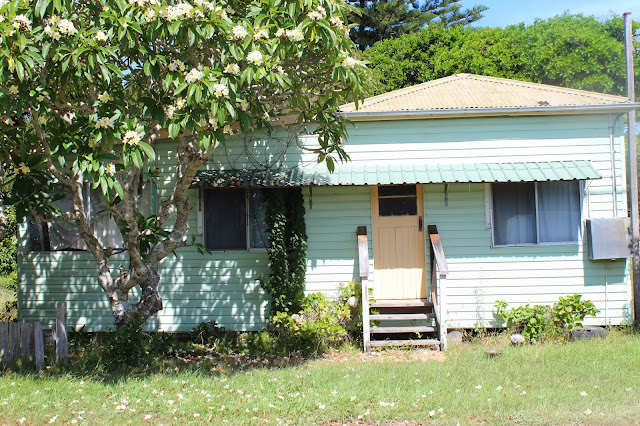 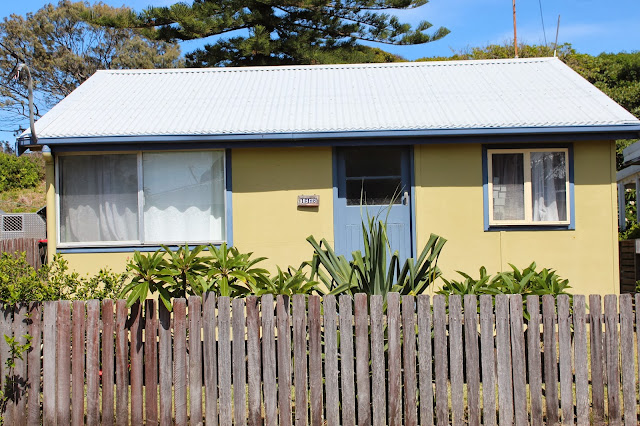 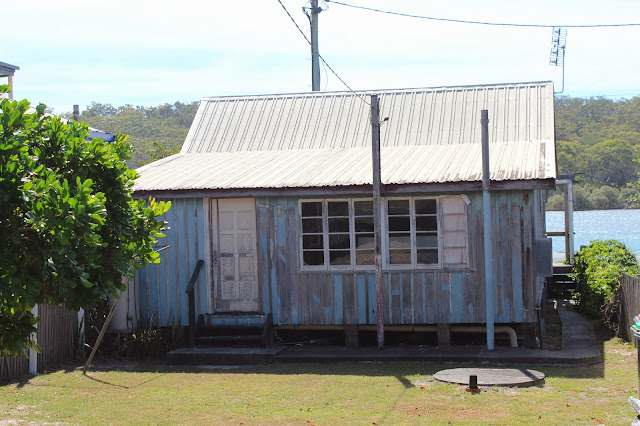 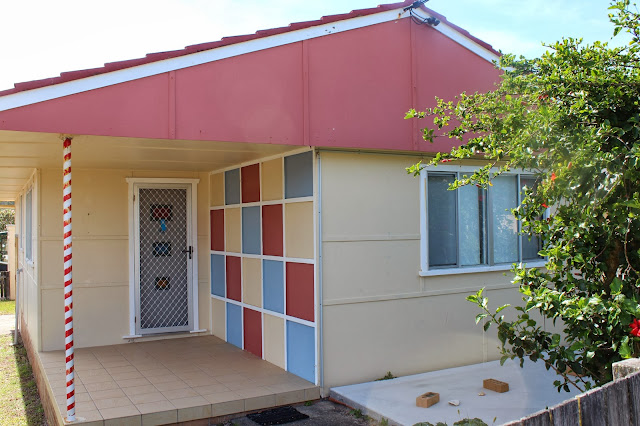 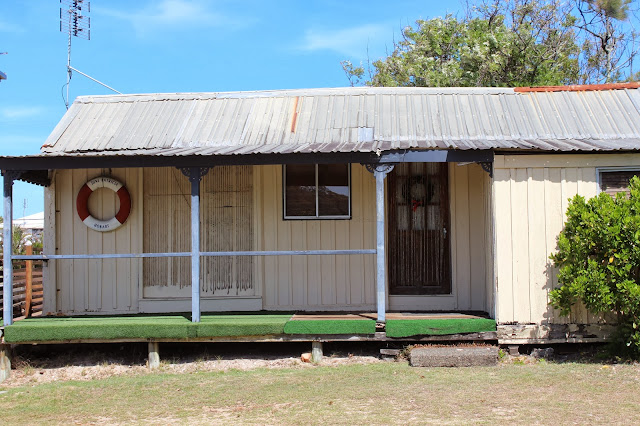 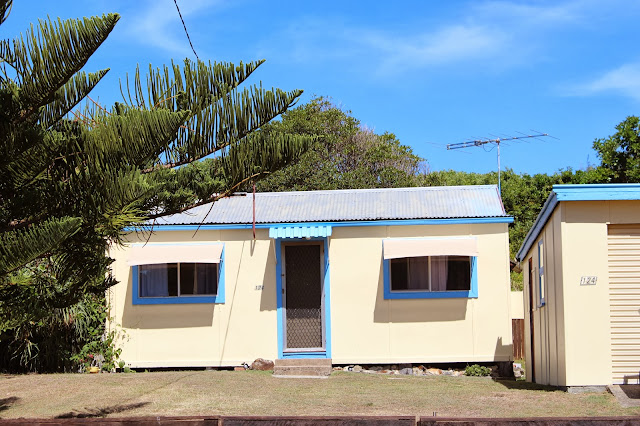 We were amazed that nearly half of the town's shacks are for sale. 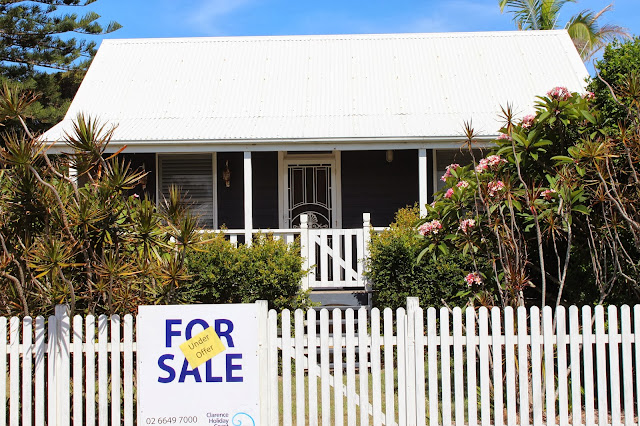 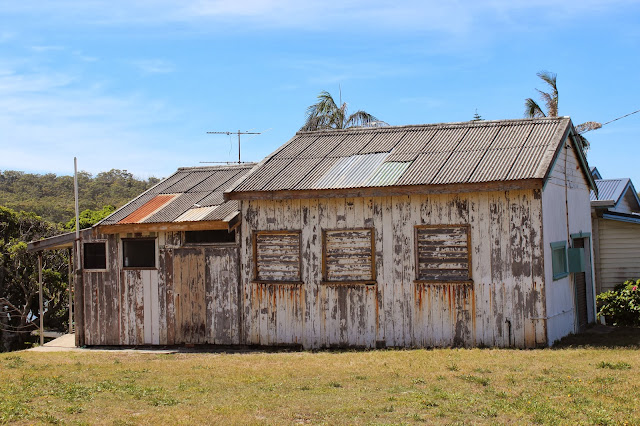 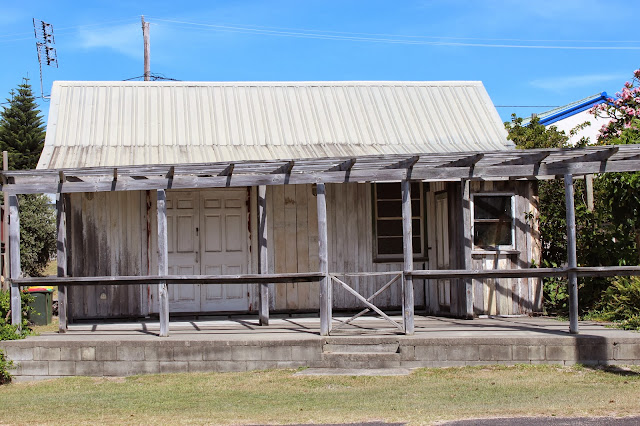 This one was my favourite, frangipani trees always win me over. 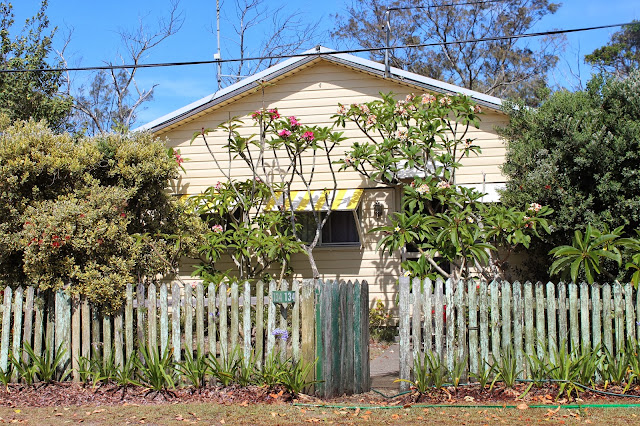 And I can even be quite partial to a good shed, of which there were many. 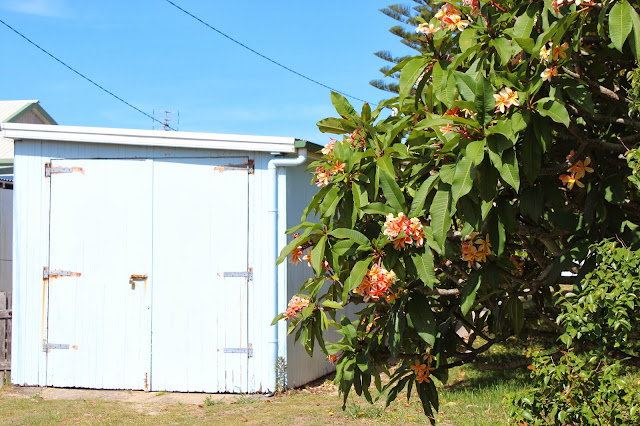 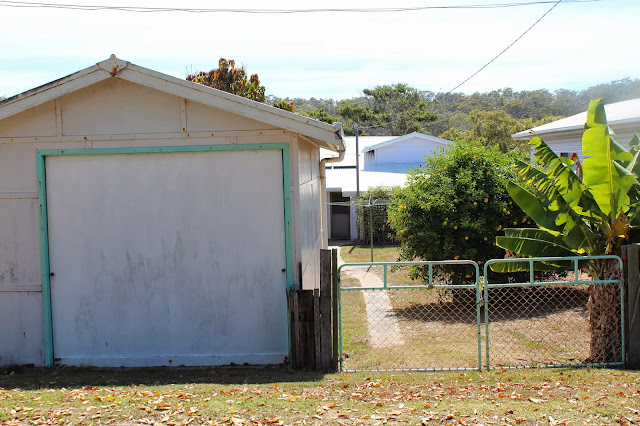 Anyway, shack ogling aside, the highlight of the trip was stumbling onto a taste of small town Christmas magic, the Aussie way. The caravan park we were staying in was also the starting point for Santa's annual sojourn down the river for Christmas carols held at the tip of the peninsula. We were all hyperventilating with excitement over spotting those six white boomers ( or kangaroos for those who have not heard this very Aussie Christmas carol). 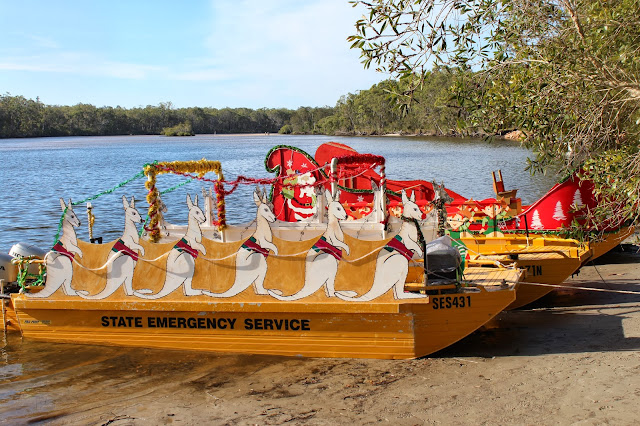 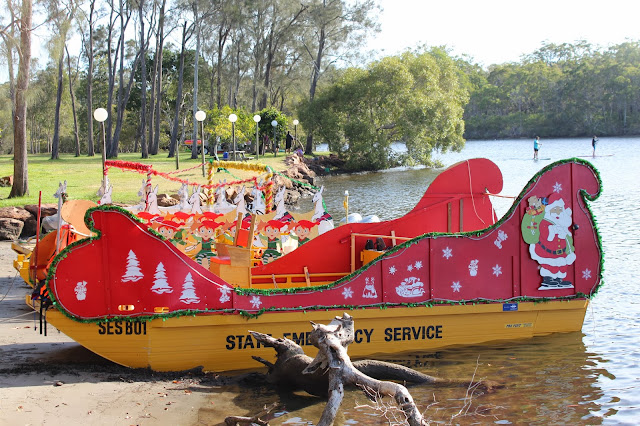 The jolly fellow handed out sweets to all the kids before climbing on board. 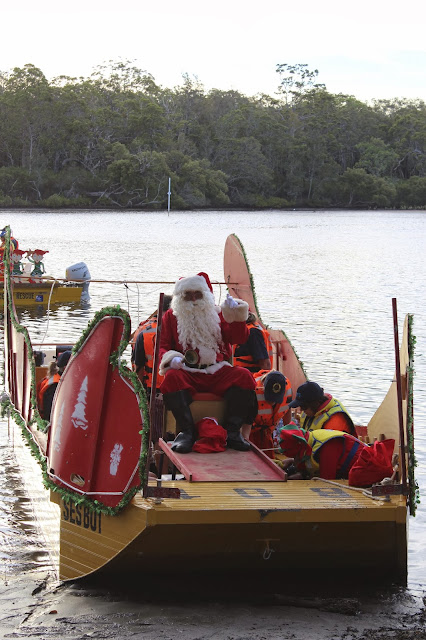 Roboboy and I had decided to race Santa the 5 k's into town on our bikes. About half way, as we fly along the path running next to the river, we hear fragments of Christmas carols floating across the mangroves. It was magical, with the dusky light, the quiet streets with just the sounds of our pedals and strains of Rudolph over the lap of the water to guide us along. We did not see a single other soul the whole journey. 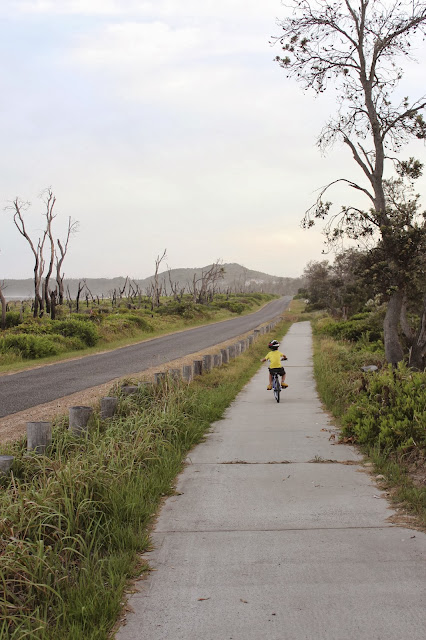 We arrived at the mouth of the river, to a pale sky and most of the town singing Christmas carols and waving glowsticks. 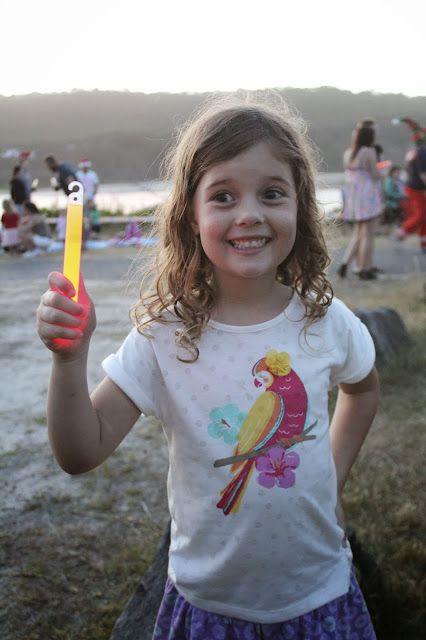 Soon, the SES marine rescue elves escorted Santa in to the shore and up the sands where he handed out more treats to the children. 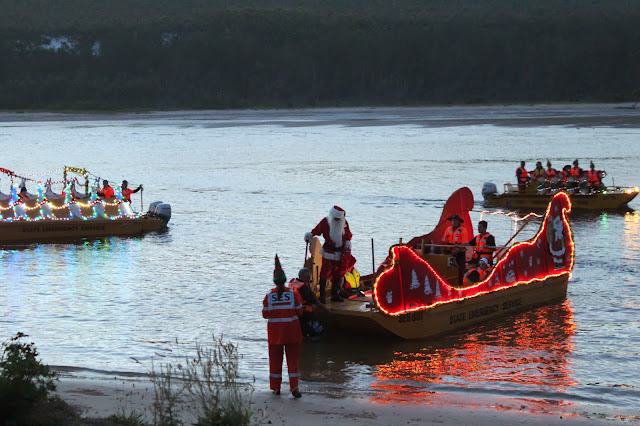 It was pure Christmas magic and we are so grateful to have been in just the right place at just the right time. Wooli, we loved you and we can't wait to come back.


(I'm presuming it's not just me who has fibro shack love, do fess up if you feel the same).

I forgot to add this before - if you want to look at some shacks to rent pop over here where many of local Wooli shacks are listed.

We stayed at the Solitary Islands Resort in a cabin opposite the pool and a massive jumping pillow as at this stage the  kids find these much more appealing than a beachfront shack. The resort is about 5k from the centre of town but there is a bike path all the way (which is almost entirely flat) and very little traffic.
Posted by Bungalowgirl at 11:04 PM