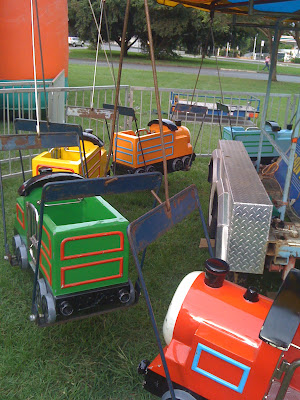 Well, it's all been happening over here at Betsy's today. But I'll start with the fun first. One of our local suburbs hosted a Fun Fair today for all the local families who were flood affected back in January. We arrived late after Liongirl's nap partly as we thought it may have been cancelled due to the morning rain.

Well how wrong were we. It was all on for young and old and within the first 5 minutes we had stumbled across 3 other families from Roboboy's prep class as well as hoardes of neighbours and old friends from kindy and playgroup.

The best part were the FREE  go- as- many-times- as- you- like  rides galore. A huge multi-lane slide- you know the sort, 3 racing lanes , 3 flights of stairs to the top, and a hessian bag to make it super fast. We could have easily left Roboboy there ALL afternoon. 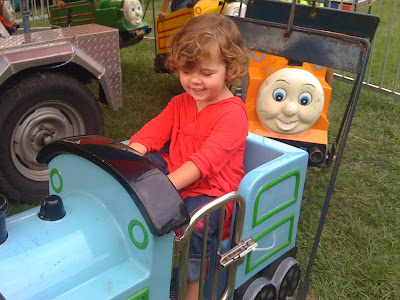 Miss Liongirl's favourite was the Merry-go-Round complete with smily Thomas trains and a turn that went on for what seemed like an eternity. Liongirl and her best friend Fifi realized quickly that they could ramp up the fun by rocking their trains from side to side while spinning and making toot-toot noises. I had terrifying glimpses of a bit over a  decade in the future where they are crowd surfing the mosh pit at a Splendour in the Grass.

We left when it was too dark to see our muddy feet and came straight home with exhausted happy children. Bliss.

Did you notice anything different about Miss Liongirl? 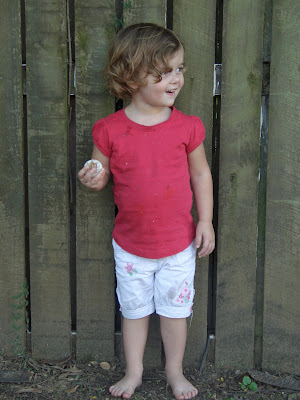 This is her showing off her new do. First hair cut and all- age 2y4m. Apologies for the very grubby clothes but that is what happens when you bribe a toddler to sit still with Pfefferneusse gingerbread biscuits. She scoffed down 4 by the way and barely took pause to breathe. She's still clutching the 4th in her grubby little paw.  She sat on my lap in a completely well behaved fashion, her only request being that she wanted to be "curly" like me. Too easy. Roboboy on the other hand is a whole other story, trips to the barber being so traumatic for both of us that my hairdresser gave me detailed instructions so I can cut his hair myself.


Ok enough about the fun. Let's talk about all the hard work going on around here. It  really all revolves around the mould. Or removal of mould to be precise. With the recent lego invasion it became clear to me that the proposed sharing of the granny flat for sewing and lego was not going to work. I had already cleared a lego cargo train off my sewing table last month and before I could blink it was covered with Star Wars sets.

So, I have admitted defeat and decided to retreat to the fourth bedroom for my own creative space. This room opens on to our lounge room and has previously been used as a depository for stuff that needs sorting. We have plans for it to become our new kitchen but as that's a little way off, it's now all mine. There will of course be signage preventing the entering of anything vaguely resembling a lego brick.

The only problem was that we had never properly cleaned it since we moved in. As it is south facing and never used,  it had built up a serious mould issue.It had been used as a bedroom by the previous family and also had really thick mould covered curtains which we binned the minute we moved in.  The ceiling was covered as was every single one of the 8 windows. After a quick demolition stint by Legoman removing curtain rails and flyscreens, it was all mine to tackle.  So for the last day and a half, armed with 3 bottles of Selleys Mould kill, I dealt with every disgusting inch of that room.

Here is a before shot of the room, some of the stuff had already been moved, sheets had been draped. 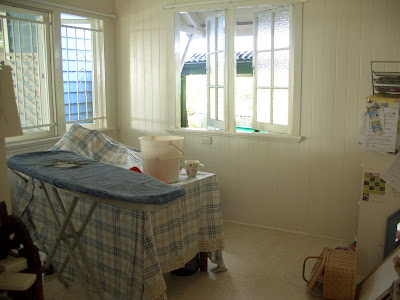 A close up of the ceilings to share the horror. The window frames were all similar and that crazed glass needed a toothbrush to clean it out of all the grooves. Such joy all around really. You can see in the bottom right panels  below the fan  is  where I have started. 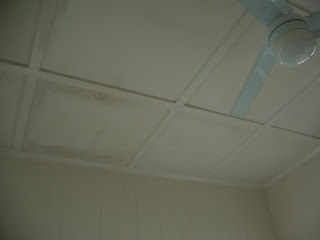 It was quite an eye opening experience with several points noted for future reference. Most all to do with the fact that I have a reckless and cavalier attitude to any sort of cleaning/preparation/renovating.

1. Yes, you can actually get a trigger finger blister from using a mould killing spray

2. It is sensible to cover everything with dropsheets as that fine aerosolized mist is really capable of bleaching anything it touches. 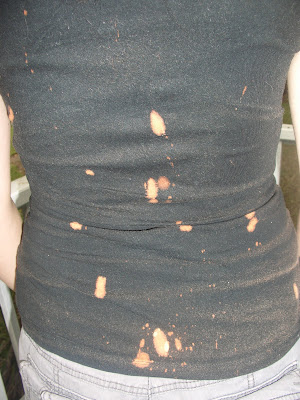 4. If you put a full bucket of soapy water atop a very tall ladder and then proceed to drag that ladder around the room, eventually you will shake that bucket off and tip it everywhere. Probably about 30 seconds after you were just thinking how clever you were to have not spilt that bucket. Be warned if that torrent of spilling water splashes the internet connection box, other members of the family could be cranky when they lose their internet connection. I would suggest then looking really busy with dry towels until it all seems to start working again, then breathe out.

5. If you choose to not wear safety goggles, don't look up while you are spraying.

6. Being 6 feet up a ladder you will discover wondrous things like- there are winter/summer buttons on fans, fans with built in lights ARE just as ugly up close  and that you have fairy moss growing like a little round cushion in the gutter just outside the window. 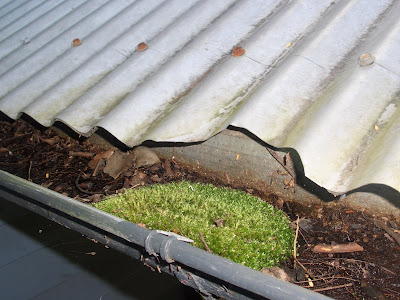 But eventually, after all these wondrous discoveries, you will reign victorious over the mould. And the fumes will cause you to squander the remaining brain cells you have formatting a post all about the mould. 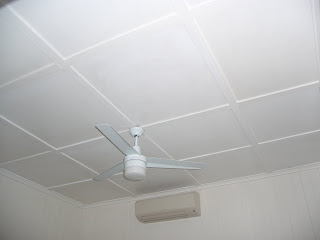 And you can start dreaming about looking out these VERY clean windows while you sew. After all you did meticulously clean eight of them. 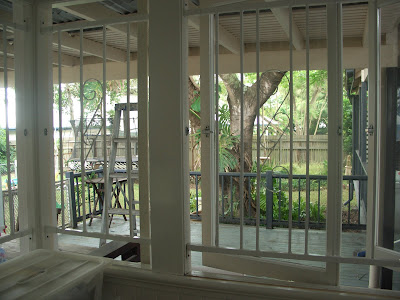 More photos of my new creative space coming soon. As soon as I come down off the bleachy high that is. I know that mould is not the usual inspiration for a post but this was a big task and it is one of the first things I have done to this house that I have actually completed in its full entirety.
Posted by Bungalowgirl at 10:31 PM