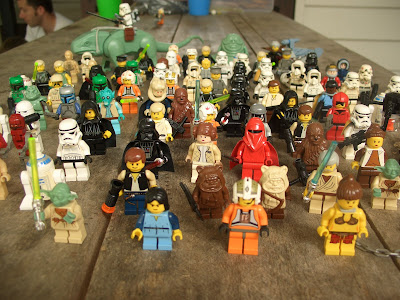 I will start by saying that I was feeling pretty pleased with myself that Legoman appeared to have changed his mind about wasting money on personalized plates. And then a 40 year old ex professional Canadian snowboarder, with an about to expire visa, turned up at our house with a boot full of lego. Actually 31 sets of Star Wars lego to be precise. With an impressive 90 minifigures to boot. If you have boys in the house, cover the screen now. And no, not all the sets would fit in the shot. 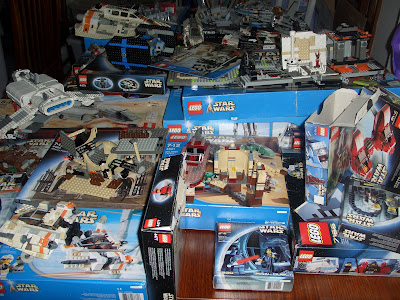 Surprisingly, his ex wife had not been enamoured with the lego collection, and strangely he had been unable to find another Aussie girl to marry and provide a long term stay here. This was despite looking remarkably like Robbie Williams (before he went all paunchy), and had I mentioned that he was a Canadian Ex Professional Snowboarder. When I archly suggested that perhaps the nerds fantasy collection of lego may have been holding him back, Legoman looked at me like I was a crazy woman. Oh and I hadn't even mentioned the full set of Star Wars Pez dispensers still in their packaging that he just threw into the pile of lego.

So it's been all action over at Betsy's. Half the boys in our street have been recruited to disassemble and scrub dusty lego sets with soapy water and toothbrushes. Then while waiting for the pieces to dry there was the compulsory discussion about whether General Grievous is the coolest minifigure, where is the missing piece to attach Princess Leia in her chains to Jaba the Hutt and the discovery on ebay that one particular set of Star Wars minifigures is listed on ebay for $9000 . I am now wondering if our set of minifigures could be funding a bathroom renovation.

Legoman reassures me that this collection was a complete bargain as he only spent about a third of what it is probably worth, it was significantly less than he wanted to spend on personalized plates and as he has duplicates of about half the sets he plans to on sell all these to pay for the ones he did not have. And before I got too excited, that his set of minifigures would only fund a new basin.  Now the only real issue is that this new collection has completely taken over our granny flat where I was about to start sewing and there are little bowls of washed and drying bricks all over the house. Sometimes I just want to break out the vacuum cleaner......

So Liongirl and I just hung out and pottered around the house together completely uninterrupted. 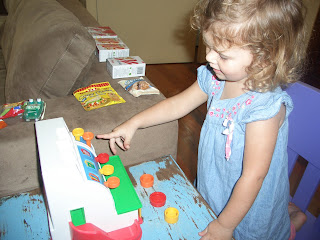 The recent copy of Real Living magazine came with a free goody bag. You know the sort where you get teeny samples of sponges and washing liquid and boxes of breakfast cereal. Well, they were immediately nabbed and lined up on the back of the lounge for miss Liongirl's shop. Each item would be loaded into the trolley, money would change hands, change would be given and once the whole shop and been purchased it would all be sent back via a delivery for the shop to be restocked. Amazing that doing this at least 6 times in a row did not lose it's appeal. 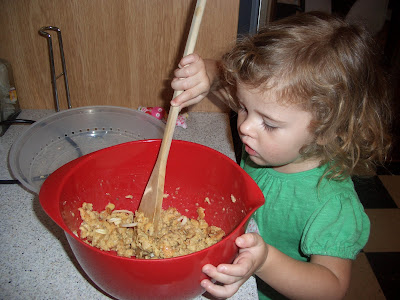 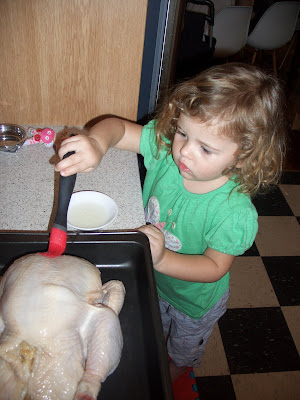 Time to make the stuffing and use the brush to oil the chicken. Every centimetre thoroughly and diligently covered.
Then it was straight back to her own box of lego to build a house , pink of course, with a white pony.
Posted by Bungalowgirl at 8:35 PM