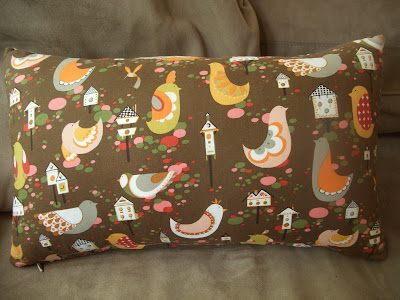 This was my birthday present to myself. I am incredibly difficult to buy for and I did not have complete confidence that Legoman would come up with the goods so to speak. In hindsight this was unfounded as he did well but said present will not actually be in my possession until tomorrow so the lack of confidence cushion is completely justifiable.

I love everything about this cushion. Love the colours which are from  the more tasteful corner of a  70's colour palette. Love the birds and birdhouses which are very whimsical. Love the fact that choosing the cushion involved a prolonged spell in a real actual homewares shop sans children. I haven't actually been inside a homewares store for about 3 years due to the logistical nightmare involved. Too many things that are white, breakable, non edible but appear chewable and the fact that the planned surgery for my 6 extra octopus arms and eyes in the back of my head  is considered cosmetic and unfortunately not funded by medicare.

So I lingered, so long in fact that I'm sure the owner was suspicious I was stuffing goods into my bag to nick them. It was frankly a little overwhelming to have all the time I wanted. Rather than doing that quick scan for a gift, choosing in light speed and beating a hasty retreat, I could look at everything and poke around all the bits and bobs these sort of stores have in baskets and packed into shelves. Birthday nirvana. Made possible by my mother who will hence forth be known as Feng Shui Nonna- she is the one constantly dispensing unsolicited feng shui advice on Betsy and all her flaws eg that massive pile of dirt that had to go by mid February.

So, like all precious things, the cushion is now a favourite with the kids who are constantly incorporating it into all their loungeroom cubbies, sneaking it into prams and even one reckless attempt by Liongirl to stuff it into her booster seat at the dining table! I am trying not to get too attached as I have concerns about staggering out into the lounge one early morning and finding all those birds being hand coloured with felt pens........

On a more positive note, Roboboy appears to have made a friend at school. Actually he claims there are two friends but I only have proof that one is reciprocated. Like most boys he generally refuses to give up the goods on the details of the day but seems to consistently be talking about the same two lads all the time.
As I have mentioned before Roboboy is definitely quirky - that's on a good day. On a bad day, lets just say he is COMPLICATED. And that means that making friends is not a given. He had one mate in kindy last year and was lucky enough to be a long term friend of the most popular girl in class which I'm sure massively boosted his social standing.

I was very curious to see what kind of boy he would be drawn to make friends with. Interestingly he has sussed out another boy who also has the stamp of quirkiness. But his main friend appears to be his complimentary opposite- very social, very physically adept and really friendly. They tease each other and his mate (lets call him Monkeyboy as he can shimmy up a street sign faster than you can blink)  loves nothing more that hoisting Roboboy up and carrying him around and this also appears to be a mutually positive experience.

So then today I had a long chat with Monkeyboy's mother. I have discovered that his family do not own a car at all ( we have one and a scooter and I thought that was tricky), that he is vegetarian of his own choosing and that his mum wants 7 children ( having already produced 3 boys of which MB is the oldest). I am hoping that having environmentally sustainable leanings and a love of large numbers of children allows them to overlook our carniverous status and Roboboy and his complicatedness. Now I just have to give them enough notice so that they can walk from the next suburb to get to Roboboy's birthday party in a few weeks time!
Posted by Bungalowgirl at 11:10 PM