Ever wanted a feature laundry?

I realized I had dangled the carrot of our "feature laundry" and then didn't get back to sharing the goods so to speak. Now we all know about a gorgeous feature wall ( either a standout colour or wallpaper), water feature (think Jamie Durie) but not everyone is so truly fortunate to have a laundry as a feature.

One of Betsy's previous owners obviously were not quite sure where to put the laundry, I kind of imagine the discussion going something like this..........

Honey, where are we going to put the laundry?

Hmm, well there is no downstairs, the granny flat means going outside and the lack of deck roof means I'll probably get wet......Oh yes and I've already carved up the kitchen to make another bedroom so the obvious place for it would have to be in the LOUNGE ROOM. Oh, yes and lets put it in the northeast corner so it gets the BEST LIGHT and has that gorgeous view of the FRANGIPANI TREE. 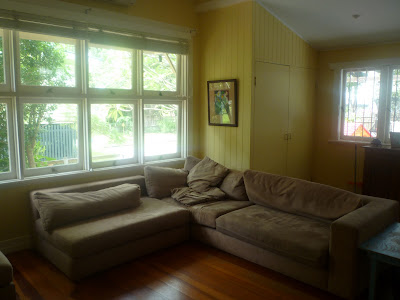 See that big custard yellow cupboard in the corner behind the lounge, well mostly it actually looks like this : 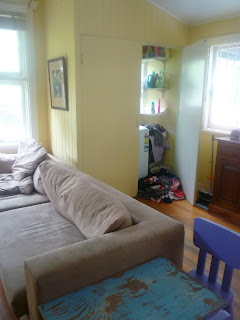 Dirty washing on view for all to see, a pile of discarded and likely musty clothes that can sometimes form a trail all the way down to hall to the bathroom. Nothing like being able to see Legoman's smalls while eating breakfast......

In an attempt to be positive about the feature laundry I have drawn up a list of the benefits of such an item :
1. no excuse about having to go outside or downstairs to do a load any time of day
2. Roboboy has been trained to take his pyjamas straight there from his bath
3. The dulcet tones of an ecowash are always in the background to make a girl feel productive
4. If you have the dryer on as well the kids have to concentrate REALLY hard to be able to hear their ABC kids which means less energy for ratty behaviour
At this rate I'm sure in no time I'll be upselling it as a most wanted design feature............

Actually it's already part of the grand plan to overhaul the kitchen and reclaim our loungeroom, there are definitely plans in the pipeline. Don't laugh but it could be going into the potential ensuite instead! More about that later as that is just another of Betsy's little design quirks.

By the way, the only reason there are no kid accessories overtaking the lounge was the quick tidy up done for the sake of visiting relatives from interstate. I am going through a transition phase of trying to get rid of some of the kiddy clutter and replace with things I actually like but suspect this could take  a little while so consider it a work in progress. I do have plans for some homemade cushion covers though, perhaps some eclectic colourful floral designs......as long as they are complimentary to taupe of course. 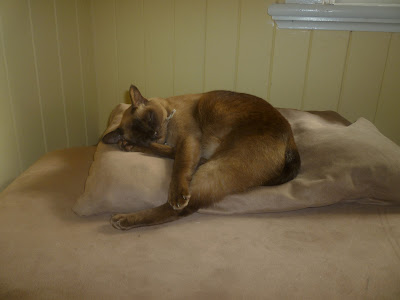 Posted by Bungalowgirl at 9:22 PM