Grateful for sharing a good wedding 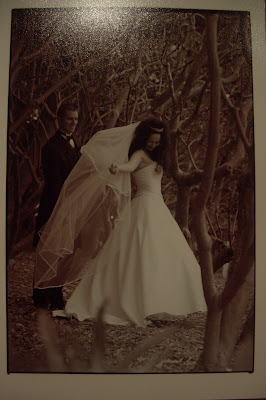 ﻿
﻿I love a good wedding. In fact any wedding really. The frock, the flowers, the statement of positive intention.  The fact that Wills and Kate have chosen to share their wedding with me and several other billion people has had me reminiscing about the best parts of  my own wedding back at the start of the millenium in the year 2000.
Our wedding was in New Farm Park, in November, under a cascading shower of Jacaranda flowers. The above photo was within an avenue of Frangipani trees, the flowers dotting the ground like fallen stars. To me it looked like a fairy wonderland. For a girl who loves trees, this was a magical place for a wedding. 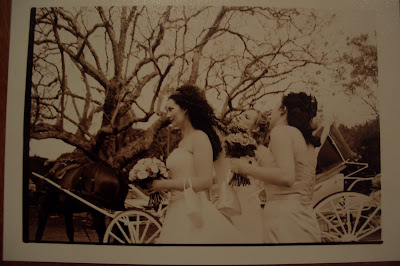 I arrived by horse and carriage- how wonderful to be able to breathe in the perfume of hundreds of roses and wave to strangers as you trot past. The carriage driver (with his 3 missing teeth) even offered to step in if the groom got cold feet. My 13 year old sister, my two oldest and best friends and one newer friend were my bridesmaids. My 11 year old brother joked for weeks before the wedding about deliberately dropping the rings, then actually did drop them and was mortified. 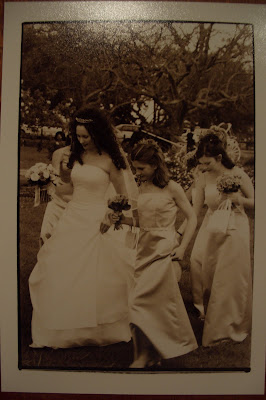 It had rained the entire week before the wedding so the park was a quagmire. Here we are squelching our way across the park watching carefully so we didn't get bogged. It fined up in time for the wedding but a massive storm brewed over our heads. Fortuitously, the storm only hit just as we made it to the reception and the light was spectacular for photos. We had thunder and lightning which is apparently fortuitous for children and check check, yep, we ended up with two of those.
The most amazing part was that the best roll of film, which contained the top photo and several others of my favourites, was lost somewhere in the park and subjected to the full brunt of the storm. I was devastated and the photographer went back the next day, ferreted through the park and managed to find it. The film had some water damage which added some authentic white spots to our sepia photographs. Sometimes, luck can just be quite extraordinary.
Also, instead of an aisle, I walked under the most beautful rose arbour in the entire world. It was removed not long after my wedding and the roses moved to another part of the park but the arbour has been  forever captured in my photos. (I did also manage to capture a large assortment leaves and twigs within the tulle of my skirt which seemed to have a secondary function of a giant street sweeper)  And the best part, not only did I get to marry the boy of my dreams, every time we go back to that park for a picnic or a play, my heart goes straight back to that magical day.
Congratulations Duchess Catherine of Cambridge, I bet that every time you kiss on a balcony you will be straight back to this magical day. Joining in with Maxabella loves to share the wedding magic around. Apologies for the photo quality, this wedding was way before digital media and our scanner isn't working.
Posted by Bungalowgirl at 10:56 PM