Vintage clobber and friends with chainsaws 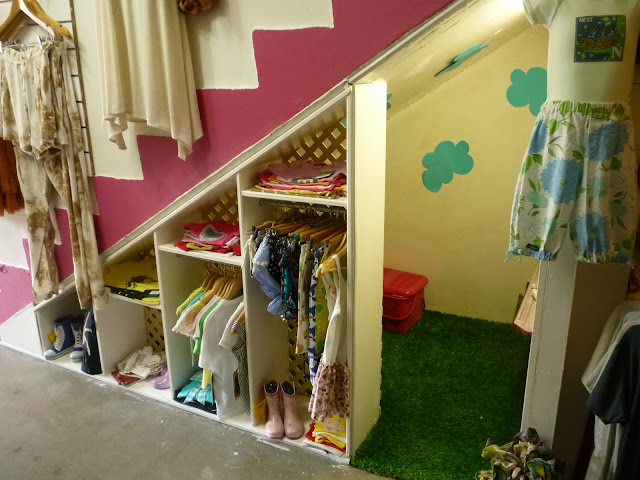 It was a weekend of epic proportions over here at Betsy's. The momentous occasion involved both children going for their first sleepover together at Nonna's. Not being the sort of people who would waste such an opportunity we packed in as much as we could. We had dinner at a Thai restaurant, saw a movie, slept in until 8 am (the first 8 continuous hours of sleep had for about 5 years) and then went out for brunch at our favourite West End cafe.
Then there was even time for a little prowl around the West End shops. The above photo is from a cute little shop called 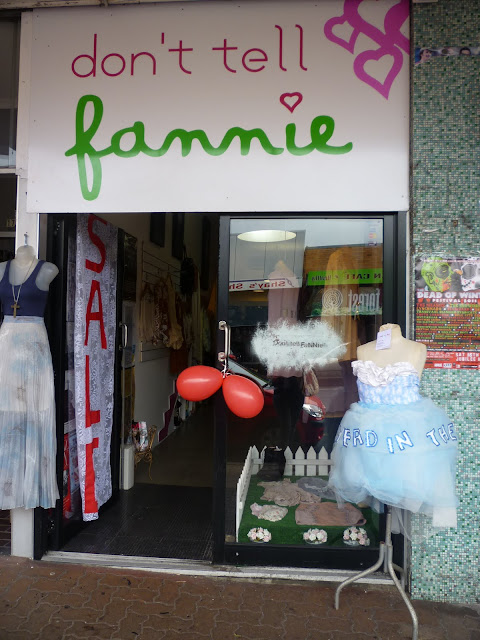 and they had some wonderful local designers as well as the cute little under the stairs arrangement of vintage inspired kids clothes and a toy room and blackboard.

A few doors down was a haven of vintage goodies called Bang Doll Vintage. 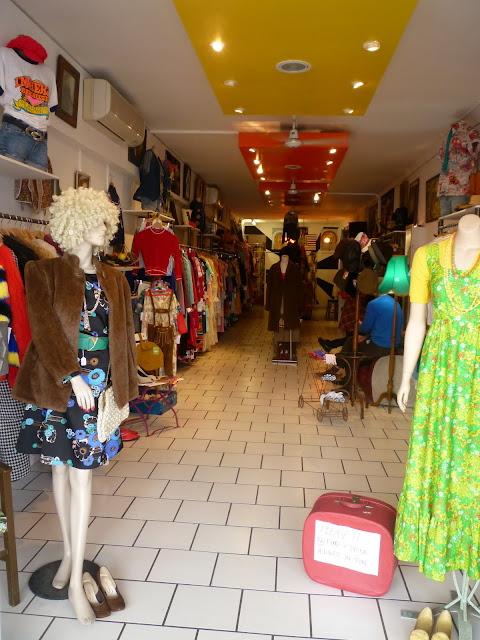 It was a visual feast of colour with outfits for the whole family. Fancy some lederhosen for your 7 yo son, yep they had those as well (on the left behind that lovely mustard coloured bag) . I was also quite inspired by the vintage apron collection and  a gorgeous red velvet brocade lounge that the owner  proudly told me he rescued  mere minutes before an encounter with a bulldozer at the tip. 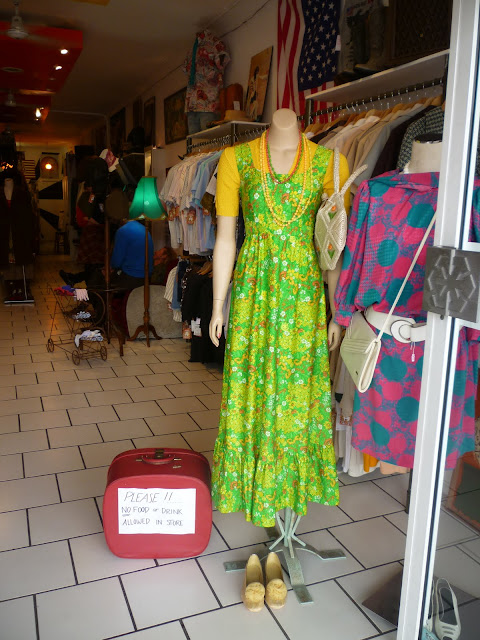 I was quite enamoured with the green and yellow ensemble. Legoman was relieved that it appeared to be a tiny size 6. Yellow and lime green are really not my colours but gosh such a glorious sight to feast the eyes on.

We wanted to pop into Nook which is the cutest little shop of hand made bits and bobs but unfortunately they were shut. The shop cat was most welcoming however and was more than happy to come and smooch us. 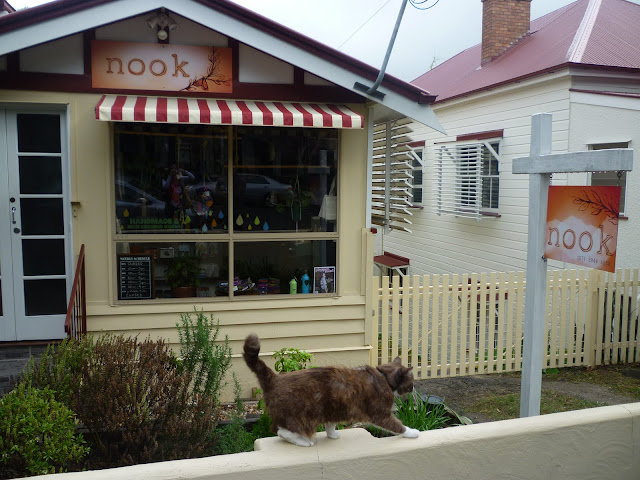 Other than breakfast we displayed superb shopping restraint. Probably because later that day we planned to head off to an art gallery to look at an exhibition of one of our favourite artists. More on that soon.....

Back home, children all delivered it was time for some friends with chainsaws. One of our friends who follows the blog offered to send her hubby over with his chainsaw expertise to help Legoman with that massive branch. There was much pontificating over weights, angles and anticipated trajectories before one  large branch swung down on the end of a rope. Another small tree was felled before they became nervous and moved onto warming the barbie instead. As I was anticipating many more felled branches than actually occurred the photos are frankly almost as unimpressive as the actual branch felling but watching the good man with the machine was pure artistry. 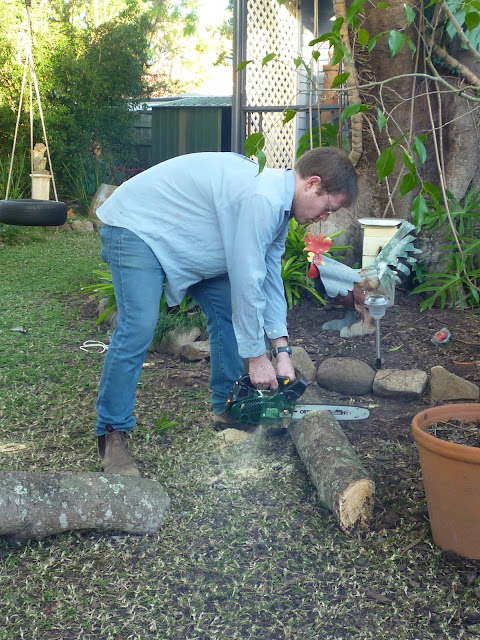 Meanwhile the boys armed themselves with hammers and got stuck into some serious macadamnia nut collecting and cracking. We have a random 70's style concrete slab in our backyard which is the home of all nut cracking attempts and chalk art works. Legoman keeps wanting to dig it up but boys love nothing more than a good concrete slab and for the time being it is staying. 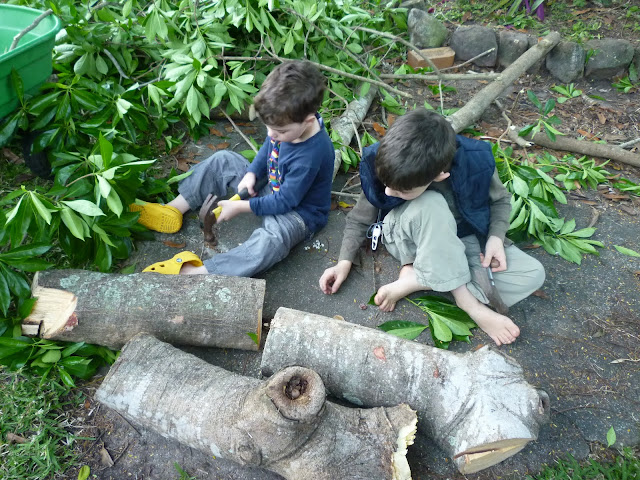 And the girls, well there were numerous tea parties, baking of sandpit cakes and a hearty game of Dora snakes and ladders. When you are 2 that actually involves lots of excited dice throwing and shouting of random unrelated numbers. 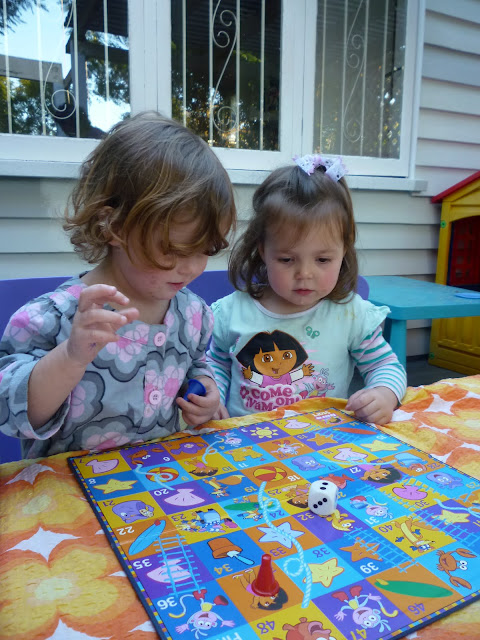 Eternal gratitude to Nonnas and understanding friends with powertools.
Posted by Bungalowgirl at 9:18 PM