It's all in the name of a duck

Well finally after 6 long months Betsy and I decided that we had had enough. The blue frock had to go. Neither of us were sure of the vintage of this  hideous blue outfit but figured it would have to be late 80's or early 90's at best. And frankly if I had been wearing something from that era for the last 20 years I would definitely have some issues.

So we set out to choose the best frock colour that would highlight all Betsy's assymetric and gorgeous bungalow charm. I had in mind something pale with brownish greyish tendencies, something a little more stylish and refined and a little less brash diner waitress.

Who knew there would be so many options? 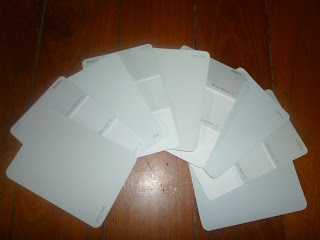 So we managed to narrow down to 17 colour swatches before we had to take a pause to mull and reflect and try them in different lights. Then I chose my favourite and bought a sample pot. It looked good but it was a little hard to tell with all that blue around and maybe it was too similar to the neighbours and not grey enough. So I bought 2 more with more grey, but I didn't really like either of their names- Greylocks ( reminded me of  goldilocks past her prime) and Silkwort ( a silkworm with warts). Interestingly I didn't like either of them when tested on the wall.

And that got me thinking, could the power of a name be putting me off a colour? Apparently there have been entire research projects dedicated to whether us girls buy more lipstick if is called cherry kisses vs plum pout or something equally silly. And at that point I realized I had been thoroughly won over by my original colour when I first read it's name and liked it more and more as I looked at it on the wall. So here's to WHITE DUCK half strength for Betsy's first proper frock. It's a little bit grey, a little bit brown and a little bit green- just what we were looking for.

I  have a real fondness for ducks, especially white ones. I had a a pet duck as a child, called Oswald (my father's middle name) and even at age 9  I was aware  this was a name  much better suited to waterfowl than a person. Unfortunately, as my dad had been saddled with such an unfortunate  name he had no qualms inflicting it on my half brother, several years after his duck namesake had moved on. Poor Oswald had a meaningful and committed relationship with a pair of wellington boots that lived at the back door and his declarations of love were witnessed every day though the window while we were having dinner.

Roboboy also has a fondness for ducks having named a pair of local ducks that we saw every day while riding his bike to kindy. Action duck and his sister were always there whenever any rescue operation was required whereby Action Duck would activate his power cell ( that purplish green patch of feathers under the wing) and a long winch of rope would unwind for any complex rescue.

And the best duck moment was the very special birthday duck that paid us a visit on Liongirl's birthday back in December. We heard some stranges noises high up in our poinciana tree and lo and behold found a solitary duck 20 metres in the air, perched on a branch singing happy birthday in duck. He then flew off and has not been seen since.

So welcome the white duck and hopefully when it's the size of a ballgown and not a hanky Betsy and I will still like it. If not, a girl can always do with more petticoats. Here is a little shot of the work in progress..... 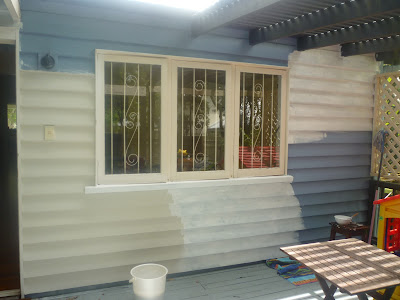 Posted by Bungalowgirl at 8:49 PM