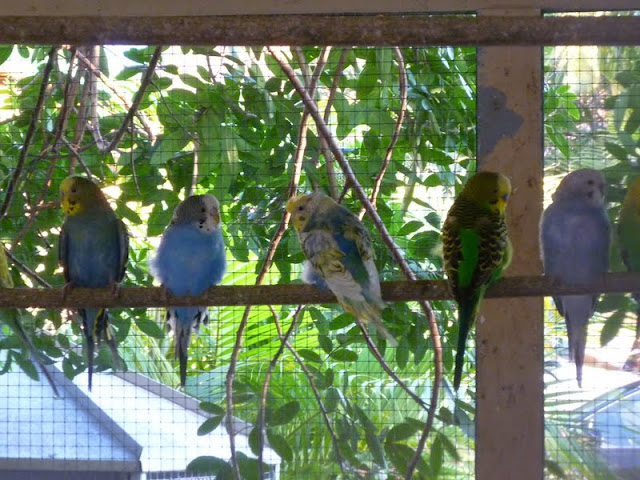 We went out for a ride after school today, a team of great explorers on wheels. First stop was  a massive bird aviary a few streets away that is set directly adjacent to the nature strip. At least 30 budgies chirping away. And guess which one Roboboy has fallen in love with? See that manky mottled one in the middle ,the really decrepit one that was sitting in that exact spot on the perch two days ago when we walked past. Yep, my quirky boy has a knack for sniffing out fellow oddballs everywhere he goes. This is the budgie that would normally be picked last by anyone else. Roboboy loved his odd colours and odd patterns and decided to name him "Rainbow". Remember last week he did try and domesticate a stink bug. We did discuss that he was not having a bird until he was 10 ( that is mother talk for never ever ever having a caged bird but hope he forgets because ten is a long way away).

On our way home we took a different turn and found somewhere new that we had never discovered before. We have lived in this suburb for 11 years but it never ceases to amaze me what you can discover when you slow down to an explorers pace and take that different turn that normally in a busy rushed world you don't make the time to take. 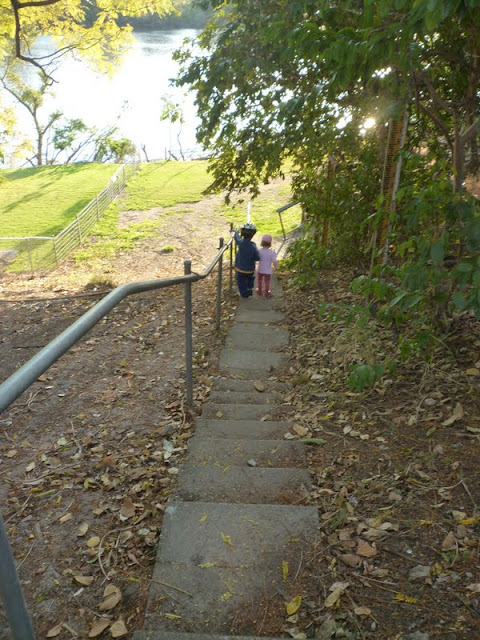 A quiet dead end street high above the river. A long long winding staircase down to a hidden world. 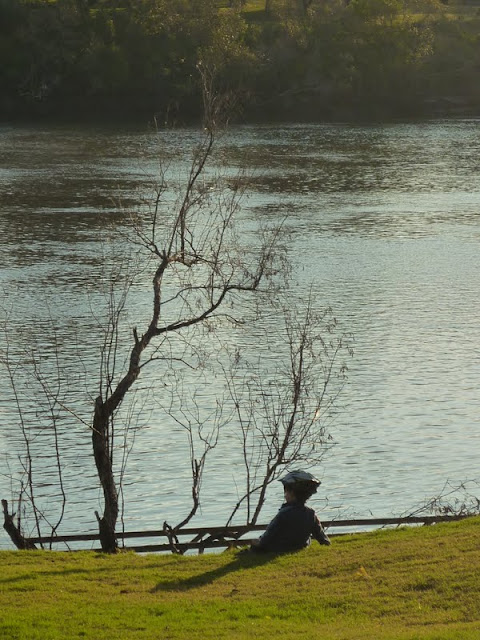 A rolling expanse of meadow bathed in golden late afternoon winter sun. Stretching down to the calmness of a big river bordered by mangroves and washed up treasures. And completely quiet. Once I managed to get my noisy rabble to keep quiet, it was completely silent, not a car to be heard. Inner city suburban Brisbane, amazing. 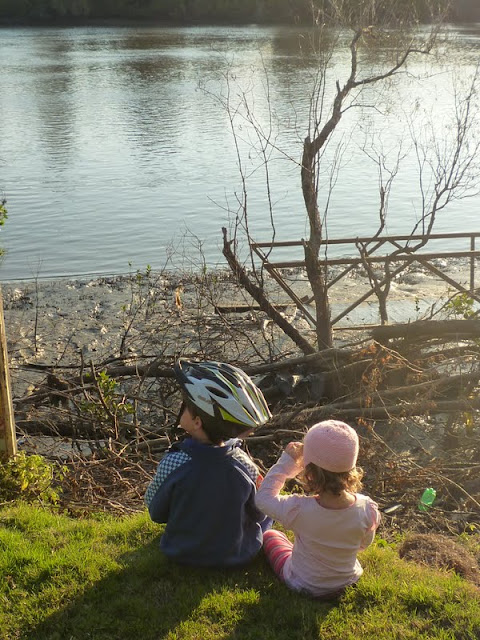 We rolled on the grass, took crazy photos of each other, watched pelicans and just enjoyed that special yellow light you only get in the late afternoon. Then it was back up all those stairs to ride home and tell Dad what we had discovered. 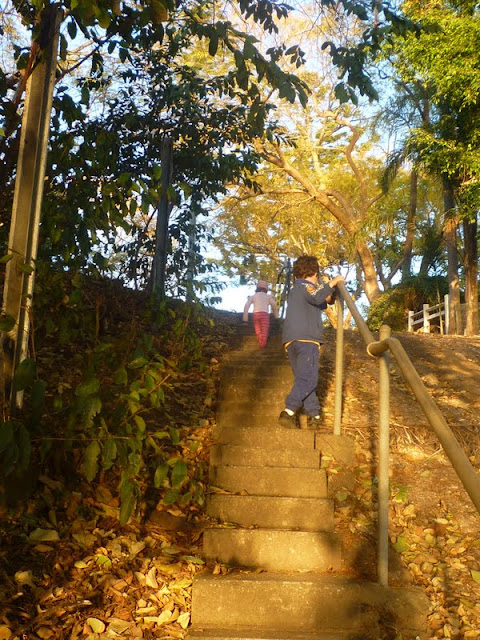 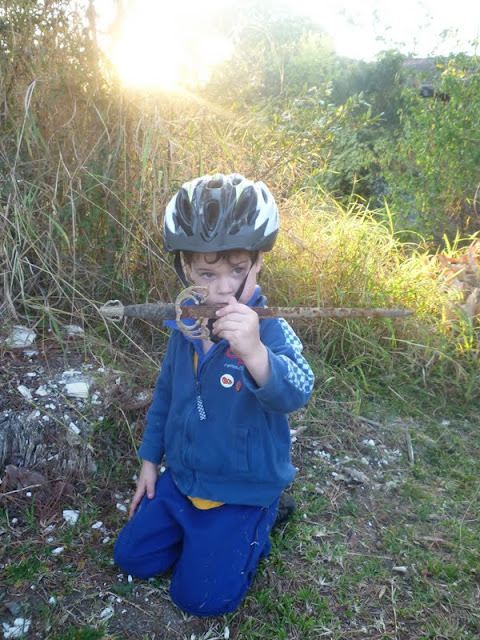 Yep a really old, ancient actually,sword with real gold and carvings from India. Apparently they have battles over there. 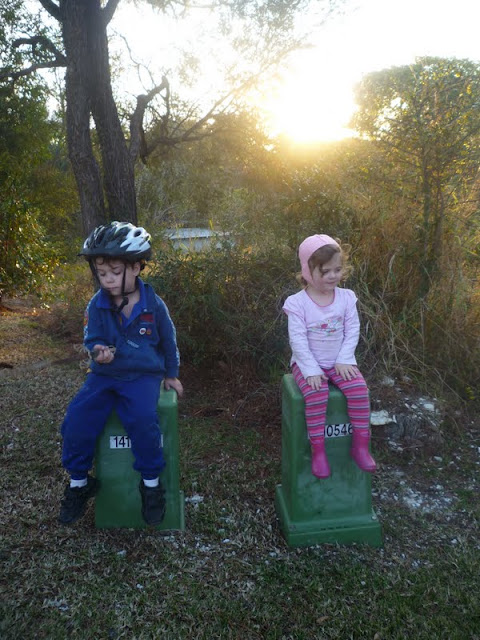 And look at this gorgeous house we found on our travels. Betsy would be excited. Darker grey than I was planning, and a much grander house than Betsy but the same gorgeous bungalow assymetry, as well as almost identical gates and fence. Actually, these gates are the fancy version of Betsy's but lets not spoil the fantasy. 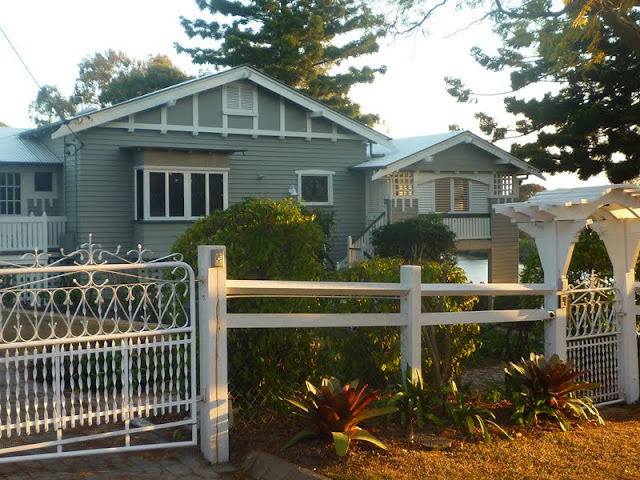 So, we arrived  home for Betsy and I to dream about new grey frocks while Roboboy of course had to whip up a scabbard for the ancient sword. 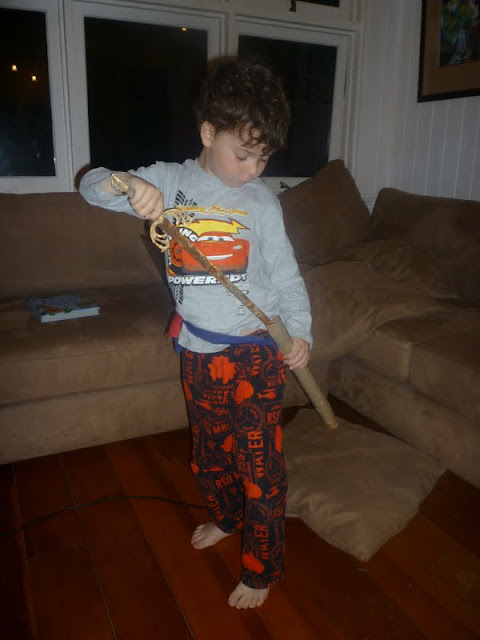 And the bassoons? Where is the bassoon in this post I hear you all wondering.  A while ago Legoman and I were having a quiet conversation about Roboboy and all his quirks. He is complicated, challenging and amazing all at the same time and we know his quirks well. Can almost predict his choices based on them. I think the conversation was inspired by this hilarious post over at Maxabella Loves. ( Who would let their child play the euphonium for goodness sakes). We were debating which instrument our (manky-budgie- loving, stink-bug-rescuing) quirky boy would choose. And I made a suggestion and Legoman agreed. The ugliest weirdest instrument would have to be the one.

And then just the other day we were watching a segment of Playschool with Liongirl featuring an orchestra. And as we scanned all the instruments I asked Roboboy which one he would like to play. Perhaps a cello I suggested, or a trumpet like one of our neighbours, or something in the percussion section. And the camera paused in front of the ugliest weirdest instrument in the whole orchestra. And his little face lit up and he said " that one mama, that one- that's the one I want to play". The bassoon.
Posted by Bungalowgirl at 11:41 PM