Eight words no mother should hear 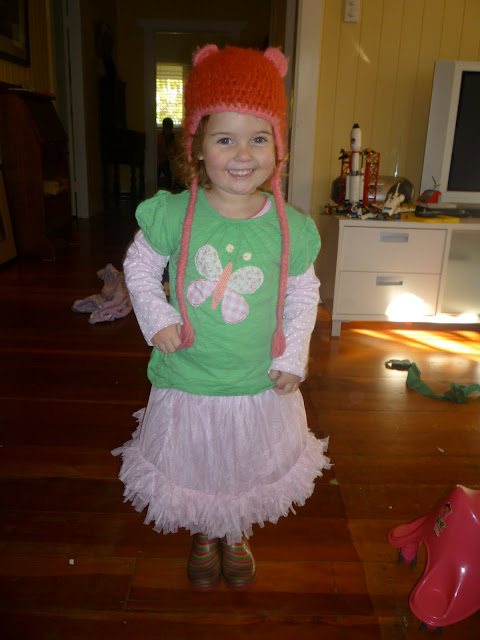 A few incidents this week have been cause for concern.

Case 1. The above outfit was selected by Miss Liongirl to wear to school drop off. ALL chosen by her ( except that I made her wear a long sleeved shirt under the short sleeved one that she wanted). Just to clarify, yes it is a beanie with earflaps, 2 shirts, a tutu, jeggings which are concealed and striped gumboots. None of this was of particular concern to me. Until we did the school drop off and one of the other mothers commented on how cute she looked. She then went on to say that Liongirl has obviously got her dress sense from me.

What does one say to that? I swear I have never left the house in a  tutu, do not even own a tutu. Maybe that she can tell I would secretly love a tutu.  Not sure if it is a compliment or not really! 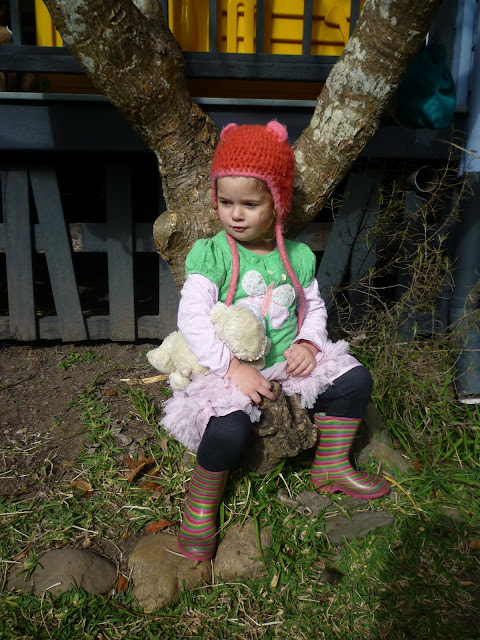 Just a quick pose under the frangipani tree as there is a natural seat within the trunk and it's a good spot to ponder what the chooks are up to.

Roboboy seems to be of the opinion that he and I share a brain. That I just know stuff that he is thinking with no real need to elaborate or explain. Last night we went out to dinner with the grandparents from interstate. As we left the pub Roboboy started to leap excitedly into the air pointing into the distance and exclaiming "mama, mama" followed by more exaggerated pointing. I looked and saw.......... not much really but then saw a the lights of a plane flashing in the sky, so I said "Oh yes, a plane".

He then looked at me like I was a few iced vovo's short of a picnic and said "Units, units" in a voice I would reserve for Legoman arriving home with diamond jewellery. The kid has some sort of weird interest in units and townhouses. However, this is really a minor concern overall. The words of great concern came as I was tucking him into bed.

"Mama, I just had to rescue him, two boys were poking him with sticks and I thought he might get really, really hurt". I kept making the bed and distractedly replied " Who's that matey". Then came those eight words - "THE STINK BUG, HE'S IN MY LUNCH BOX". 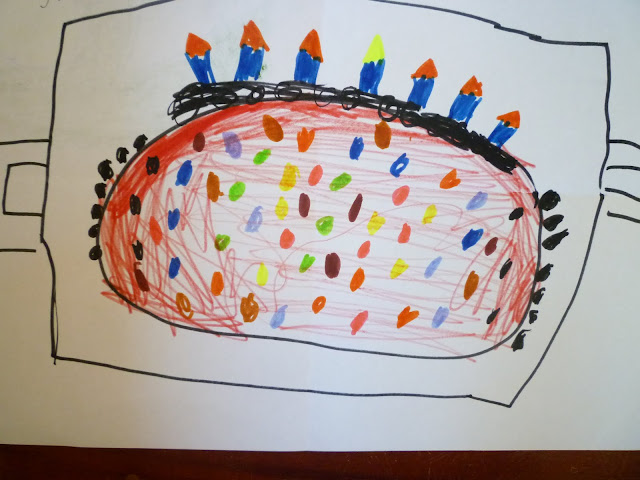 At least he's cranking out some splendid art works. This is a birthday card for his best mate who was turning six. The seventh candle is the one for the wish. Note the tray under the cake,  he has been happily directing the styling of my blog photos as well. Does help distract from  the stink bug situation.
Posted by Bungalowgirl at 10:56 PM