Betsy and I have been a little busy for the last few days. You see it's a big day tomorrow, it's a big 5 year old birthday party kind of day. And in our house any excuse for a party is welcome. In fact we have been party deprived since we moved in with Betsy 8 months ago so lets say it's a housewarming party as well.

Now I will warn you that birthday parties in our house are a serious business, especially the cake. I can still remember poring over the Women's Weekly birthday cake book back in the early 80's trying to decide what I would have next. In fact my mother aka Feng Shui Nonna has often recalled that the day after any given birthday I would be straight back to that book choosing the next cake for her to whip up. And credit to her, she always came up with the goods, despite being a full time working single mother. So for me, part of the whole package of being a mum is producing an awe inspiring cake.

Feng Shui Nonna always produced the cake, but then she was done. February is a disgustingly hot month in Brisbane and this would serve only to remind her of my birth via Royal Flying Doctor in a 40 degree heat mining town  and she would then leave the rest of the party planning to me. Not that I minded at all. I can distinctly remember around age 7 planning my own mintie hint in the back garden and hiding them all , then watching all my mates find them. So party planning for me goes WAY back.

Roboboy has the party planning in his blood too, and this was his first year to choose his own cake. Previously, it has been my chance to unleash my imagination and whip up whatever inspired me. I knew the day was coming to hand the reins over to him. He studied the cake bible and predictably wanted the train a few months ago, mainly as he thought this entitled him to eat an entire carriage by himself. But, creativity won out and recently he requested the current obsession- an Octonauts cake. In fact he would really like the Octopod plus all the Gup submarine vehicles but we are currently in negotations about that.

I thought I would share the 4 previous cakes I have made. The first three were made completely out of my imagination and I still love them. Number 4 was straight out of the cake bible as I was creatively stifled at the time. A month before we had started an elimination diet for food intolerance and I was unable to uses any food colouring, additive,preservative or dairy  (as this is the constant allergy for him) hence the very plain race track with cocoa icing and natural lollipop signs.

First birthday : Seahorse. This cake was gluten free, dairy free and egg free due to severe allergies and held together by icing and lollies. 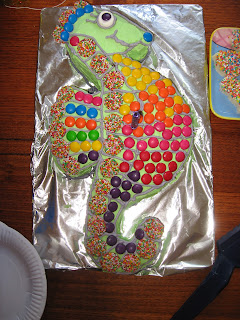 Second birthday: Red Mower. There was a LONG period of mower obsession over at our place- in fact Roboboy had 4 toy mowers in his prime- red metal, red plastic ,green plastic and yellow plastic.All parents at this party were required to sign waivers regarding taking matters into their own hands if they let their children eat that red icing. 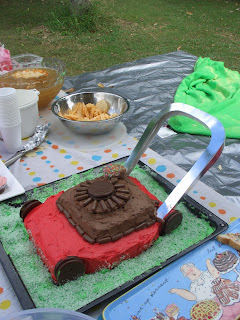 Third birthday: Rubbish truck- front loading type. This was going to be a 2D cake until Legoman egged me on to make it in 3D- took way too much time but pulled it of in terms of  the  lolly stakes. This was also related to a  long phase of fixation on anything rubbish truck related. He still owns 3 - front loading, side loading and back loading. I did manage to scuttle 2 others off at a previous garage sale. 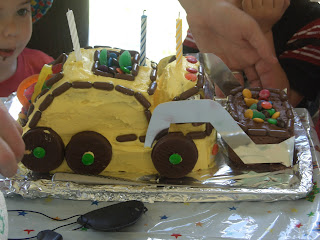 Fourth birthday: Racing track- completely artificial free and dairy free cake. Unfortunately everyone at the party asked my why I had done a number eight when he was turning four. 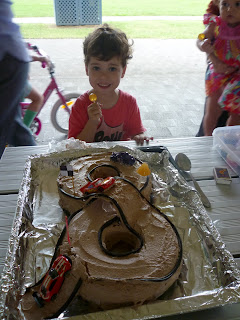 So tomorrow, hopefully I've got my cake making mojo back. Along the way I have learnt to simplify my approach. What I now go for is maximal lolly coverage, maximal use of colour( but natural) and something vaguely in the  child's interest area. Fingers crossed I can pull a Gup C out of my hat.......
Posted by Bungalowgirl at 12:35 AM