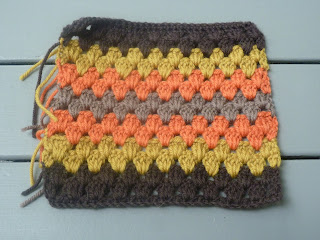 It's time for some crochet action girls. Betsy and I have got the FEVER, yes that's CROCHET fever ( said with the accent of Donkey from Shrek for maximum effect) Parfait? EVERYONE loves parfait. I was thinking that with my recent lack of updates on crochet progress that you were all out there scoffing that this crochet was just some flash in the pan thing. Some whim lasting all of the duration of a Shane Warne/Liz Hurley relationship.

Well proud to say we have outlasted Liz Hurley. And going strong. This was my first effort from my 200 crochet squares book. Number 76 titled "Granny Stripes". All the patterns are very helpfully graded from easy- moderate - hard by the number of crochet hooks so this was one of the one hook wonders. I do have some slight concerns about the fact that it is actually more rectangular than square. Not sure if this is due to a stuff up by me or if when it gets blocked ( ie stretched and steamed) that it will spontaenously behave and take on squarish tendencies. Note the superb job my newly painted greyish deck is doing as a backdrop. The colours were inspired by this old friend.... 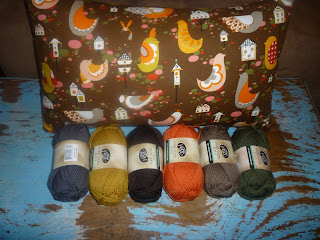 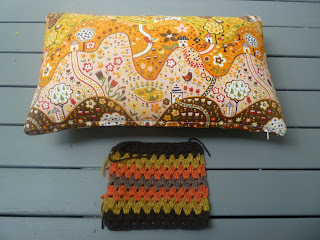 I thought not a bad colour effort considering I did not have the cushion stuffed into my work satchel for the spontaneous shop at Spotlight when the wool was purchased. Still deciding whether to do a cushion or a rug.

Have something to confess. You know how recently I was flaunting the fact that I could now read a pattern, part of a secret club blah blah blah?
Yeah well that came back to bite me didn't it. Kind of like when you smugly boast about your 3 month old baby sleeping through the night because of your superior skill as a mother (not directly said but implied of course). Then they start to get teeth/get sick/you go travelling and you suddenly join that club of zombie mothers and feel like total goose.

I just started on my next square and have had to pull it apart about  20 times in order to work out what "into ring" means. Having made a "ring" of stitches I was trying to then join stitches into my chain/ring. But no, that is not remotely what it means. "Into ring" actually means " into the big hole and nowhere near any previous stitch".

Kind of reminds me of many of my forays into baking desserts. Try as I might, I am genetically incapable of producing an intact dessert. It seems to me that They (that would be the evil THEY who write dessert recipes) always leave out that one critical explanation that other women must just know. Passed down genetically through a long line of women and just incorporated into their knowing gland for recipes.  Like when they tell you to add the eggs but leave out that the mixture must be at room temperature ( because surely any self respecting woman just knows that) and not just off the stove which was the prior step and suddenly everything is curdled and disgusting.

Having sorted that out, I have progressed another row and am now trying to work out what 1tr into next 3tr means. If it is between the trebles there are only 2 not 3 spaces, if it is inside the trebles which bit of them do I go through. AAAARGH, I need the equivalent of a spell check for crochet, something that gives you an error sound and a red flashing light when you stuff up and a ping sound and a green light if you get it right. In the meantime will just have to persevere and hope it ends up vaguely squarish and like the picture.

By the way that wasn't me boasting about the baby sleeping through,  Roboboy didn't work that out until practically 2 and while Loingirl was much more accomodating I wasn't silly enough at that stage to announce anything so reckless. May all sleep deprived mothers of small children unite. But not over crochet as it takes way too much concentration to be doing it sleep deprived.
Posted by Bungalowgirl at 9:50 PM