Spelunking in the suburbs 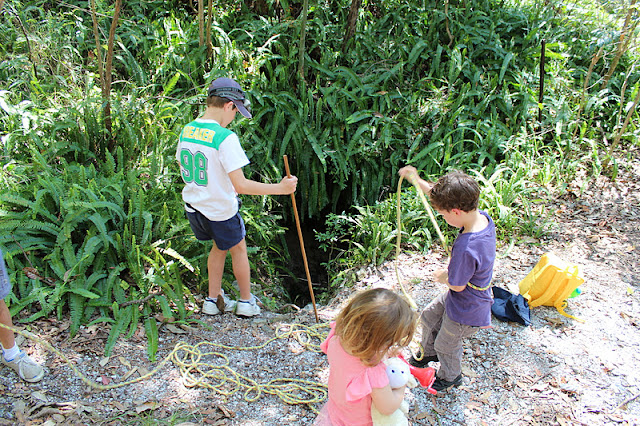 Firstly, if you are like me you will be wanting to know what the heck spelunking is.  Legoman, while often unable find the salt directly in front of him in the pantry, is a wealth of information about all things trivial, particularly with interesting names. I am informed that spelunking is a much more interesting word than caving or cave exploration.

Secondly, if you are like me you will be wondering where on earth are there caves in suburban Brisbane? Well, let me fill you in on our adventure filled Sunday. Last weekend, while scoping out the lookout at Mt Gravatt mountain, Legoman discovered a geocache nearby. The cache description stated to never look for this one at night, and that it was not safe for children. We figured in broad daylight we would press on and I would turn back with the kids if it became too rugged.

We easily found the cache and then turned around and saw this huge hole. About 3 m deep we of course had to climb down and have a look. Unfortunately, being a cave and all it was too dark to see much. So an expedition was planned with our neighbours the Menace brothers  for the following weekend. Backpacks were stocked with provisions, torches, rescue rope and maps. The Menace brothers being the oldest were straight in. 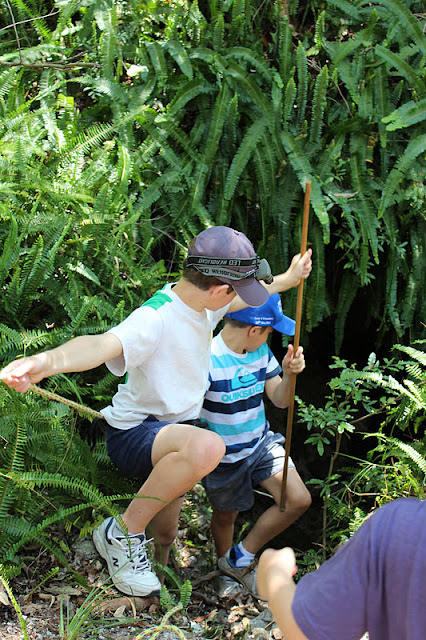 Liongirl, who had dressed for caving with boots, fairy skirt and pet lamb, was given the coveted job of winding up the battery free Ikea torch. 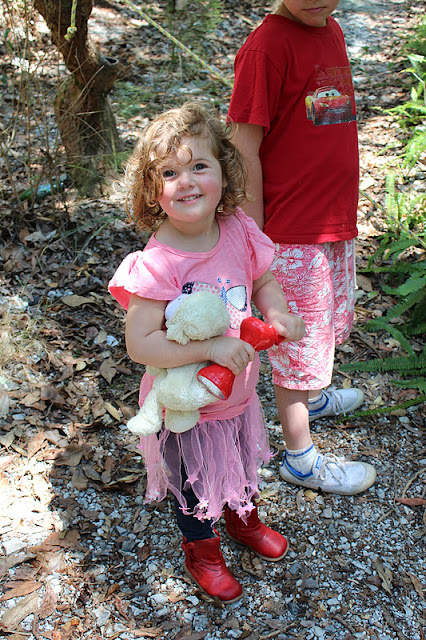 When we got to the bottom this time, we were prepared for some serious exploration. 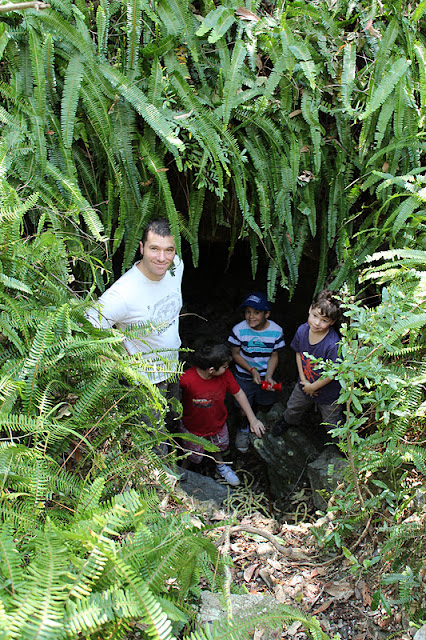 I had felt a breeze down there last week and suspected a connection to a larger cave we had found. Sure enough, there was a tunnel and the boys were off. 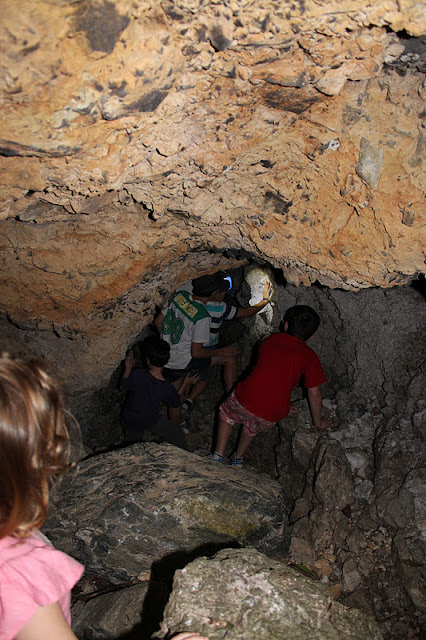 A few minutes later and we stepped out into a massive cavern with several light well holes filled with ferns. Hence the suggestion not to go geocaching around these parts in the dark. Yep, the tiny figures at the bottom are the dads. 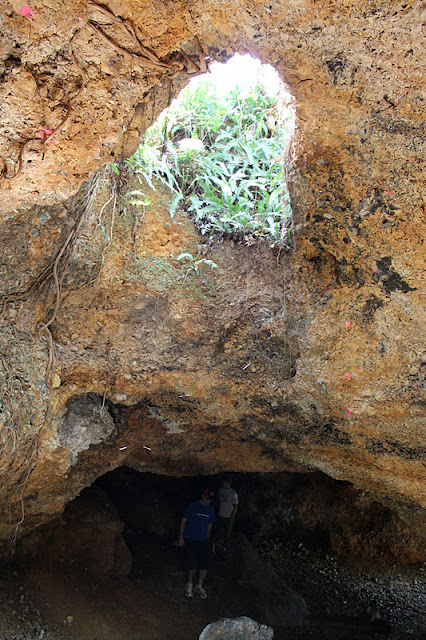 And we found the other bigger cave entrance, no warning signs, no barricades, no theme park entrance ticket booth.  Just pure unadulterated boy's own adventure stuff with the possibility of spiders, bats,  a cave in, skeletons and treasure. For the record we only saw some dead huntsmen spiders and a small frog. 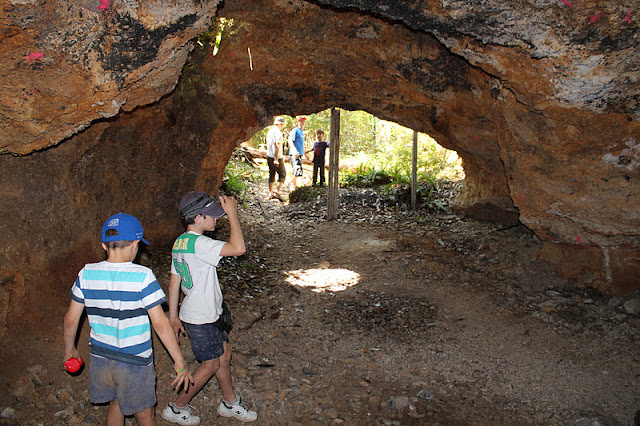 But it was so super exciting, we had to go all the way back through and up our original rope. 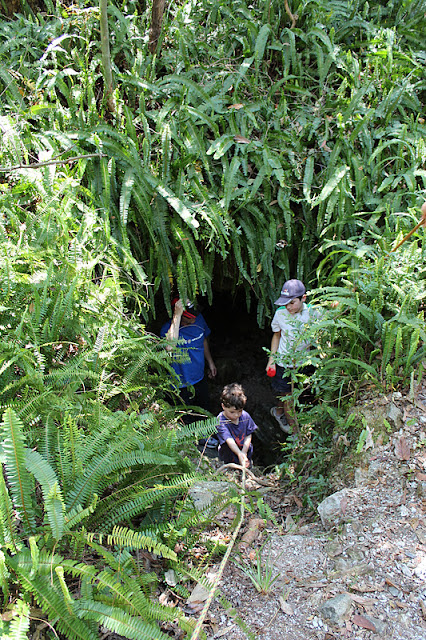 And then we packed up all our gear and talked about caving, and talked some more and then we were all so hyped up we thought we had best find some more geocaches. The caves must be known to locals as there was evidence of a fire within the large one and they are quite close to some houses that back onto the forest, but I am still amazed that they were not closed to the public for safety reasons.

We were thankful for the opportunity to take a risk and sail unchartered waters so to speak. I think that opportunities like these  are particularly important to boys who thrive on quests and adventure and whose everyday lives are often so safe and sanitized that they can only obtain this kind of adventure in a computer generated world.

After all this we were pretty worn out so it was straight up to the cafe for Lemonade icypoles. 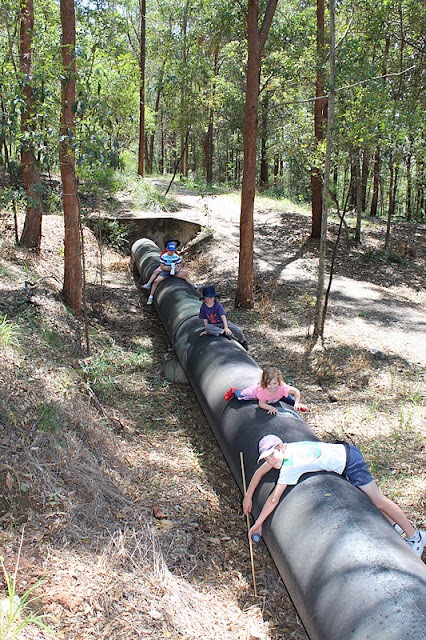 There is nothing better than  adventuring in your own backyard with neighbourhood mates. We feel so lucky to live where we do and have a neighbourhood of like minded kids and parents. And we are getting really excited about Halloween as our whole street gets right into this celebration as well.
Posted by Bungalowgirl at 10:27 PM